At the Beginning: John Carter: A Warlord of Mars #1 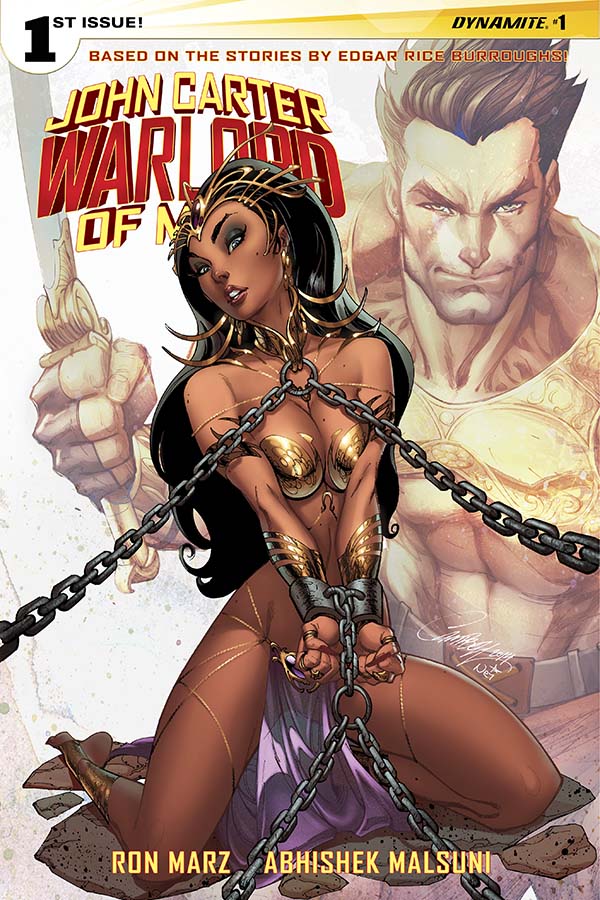 We don’t often consider single issues here at Comic POW! We prefer to look at story arcs and completed series to get a better feel for what the author and artist were trying to accomplish. However, I thought it would be interesting to take a look at some comics’ first issues to predict where we think it might be going and see how that compares with where the series actually goes. This new series is called “At the Beginning” and it’ll usually be for series right as they are starting up.

I didn’t know too much about Dynamite before going into Baltimore Comic-Con 2014. I did notice they tended to do what often appeared to be public domain characters like Zorro or Green Hornet. While at BCC, I learned that Dynamite’s model revolves around licensing characters – many, but not all of them, older. Then Dynamite hires creators to write and draw new stories with these characters.

I don’t know much about John Carter – I read the Wikipedia article a few years ago when he appeared in the second League of Extraordinary Gentlemen. I know he’s based on science fiction from decades before we’d even started to think about a manned moon mission, much less a mission to Mars.

This comic seems to be perfect for someone like me while not alienating readers of Dynamite’s previous John Carter stories. It’s not a reboot (I really appreciate that vs DC’s tactics for new readers), John Carter is already a Warlord of Mars. Rather, a large chunk of the comic involves Dejah Thoris, the woman on the cover, under the influence of a truth serum and being asked about Basoom (Mars). While not a wholly original concept, it is a good one for a first issue. Not only does it establish that things aren’t going well (Dejah is in chains and someone is forcing her to talk about Barsoom), but it also gives a reason for exposition outside of people talking unlike anyone in the real world.

The key things we learn are that John Carter is from Earth and fought in the Confederate Army. He’s married to Dejah, making him royalty. On Mars he’s like Superman – stronger than everyone else. When this story starts, an invading force has taken the main city of Helium and is planning on enslaving all the Martians.

A key theme at the BCC panels is that pulp is Dynamite’s bread and butter. While the John Carter novels from the early 1900s predate the pulps of the 30s and 40s, the content is definitely pulp-like. A good fight and a manly man getting the desirable woman. The art and the story of this first issue certainly support the idea of this being a pulp take on John Carter. I predict Marz’ run on the book to be a series of exciting adventures with people dressed as if they were in the Red Sonja book. Almost certainly John and the leader of the forces introduced here will end up in hand-to-hand combat.

What I’d like to see are some surprises given the pulp setup. Does Dejah end up playing a key role or is she a prisoner the whole time? Does John end up incapacitated and someone else saves the day? I think we’re looking at a fun romp no matter what, but a really good time if Marz can surprise us.

John Carter: Warlord of Mars #1 written by Ron Marz with art by Abhishek Malsuni and Nanjan Jamberi will be released 5 November 2014.

Dynamite: The Next 10 Years