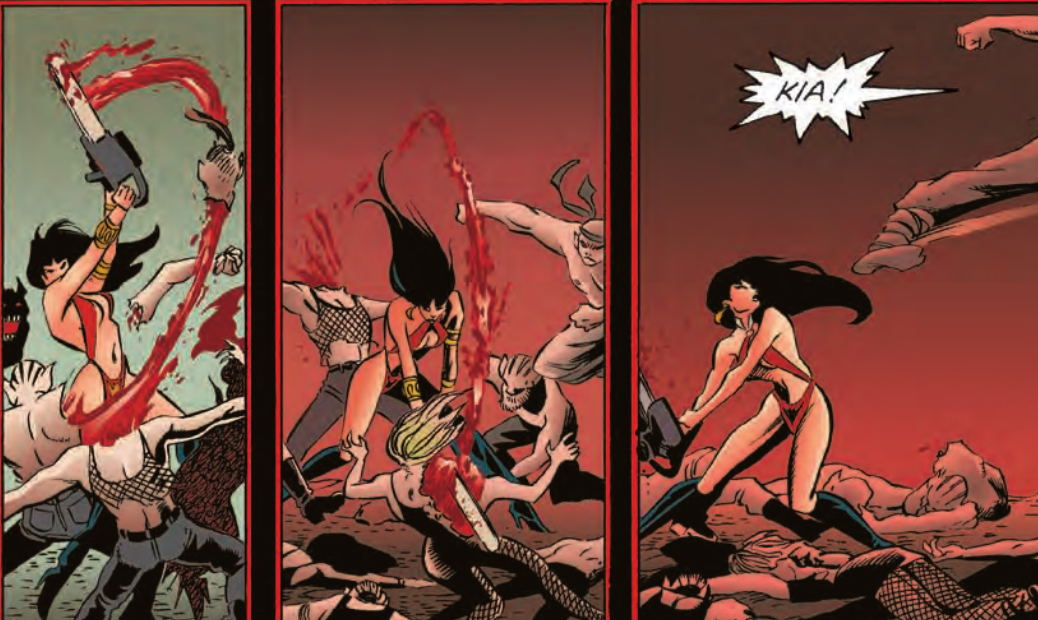 By this time, long-time readers of Comic POW! will know that I have been exploring pulp comic storytelling via Dynamite’s offerings. As the main deal-makers with many of the rights holders of the old pulp characters, Dynamite is leading the way in neo-pulp in comics. So far I’ve really been enjoying Gail Simone’s run on Red Sonja. However, of course she’d be able to do justice to strong female characters with her pedigree on Women in Fridges (the website) and lauded runs on Birds of Prey and Secret Six (among other titles). What would happen with a campy vamp (in both senses of the word) written by one of my favorite writers (Grant Morrison) and a writer that just as often rubs me the wrong way as the right way (Mark Millar) in which they teamed up on the script?

They didn’t go in the same direction as Red Sonja in which she had a less ridiculous outfit within the comic, but that’s OK (while not the best possibility). What I didn’t like about the main story, and perhaps it’s an effect of the way the story was collected, is that it appeared quite disjointed. It went from Vampirella trying to save a mob boss from vampires to being accompanied by a wannabe vampire hunter. Additionally, if this girl can easily fight vampires after like a month of training – just how hard are these vampires to fight, anyway?

Overall, it appears they just wanted to create an action romp and there’s nothing wrong with that, but with these guys as the writers I was expecting something groundbreaking in the mythos – especially with how interested in these types of things Grant Morrison tends to be. Instead we got the same tired refrain – the head vampire is Judas Iscariot.

By contrast, the two short stories in the collection showed some inventiveness. The first one was a Tales from the Crypt Keeper-like story in which a woman finds a mysterious card on the train that causes her to murder some people to satisfy a god. The other one is built on a pretty novel premise (although not unheard of) that perhaps vampires might want to live in the arctic circle where they would have something like 6 months of darkness in which they could roam without worrying about the sun.

Agree? Disagree? Either way, come discuss it in the comments!