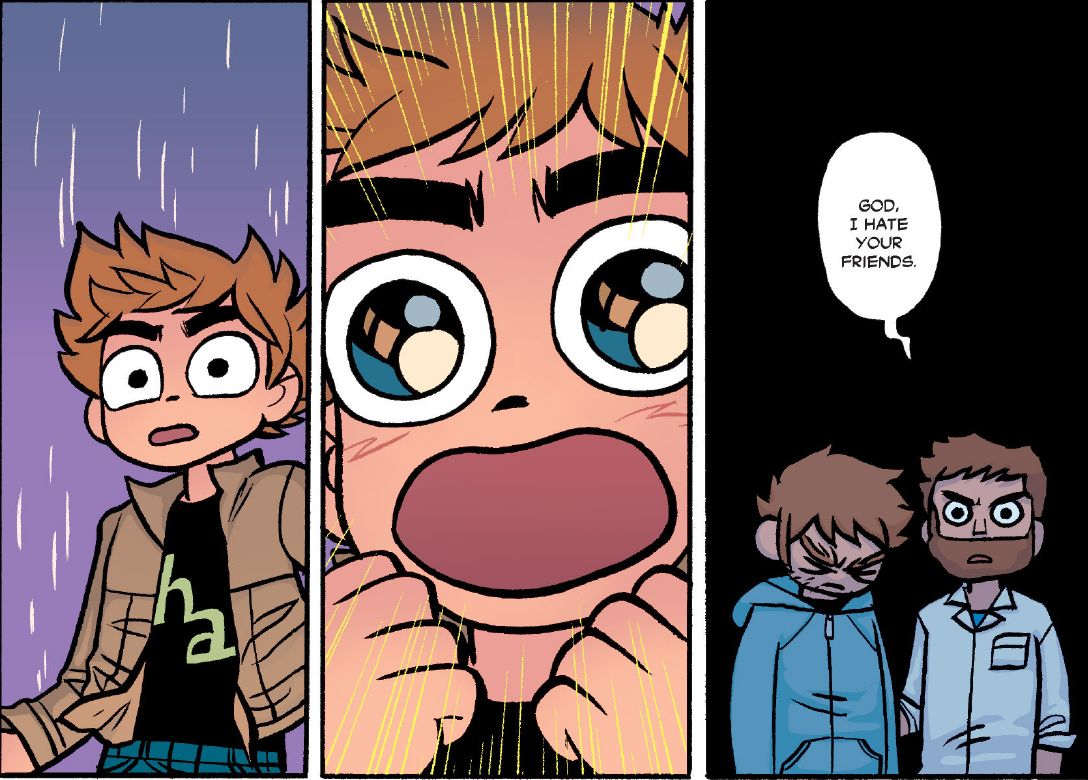 I read Scott Pilgrim in its original manga-sized, black and white form when it first came out. With the final volume of the color version coming out this year, I thought it would be a great time to revisit the story as well as looking at how the addition of color changes things. I’ll be exploring the story and themes volume by volume. This time,we reach the conclusion with Volume 6.

At this point, it appears that everyone has grown up except Scott Pilgrim. Nowhere is this more apparent than his misguided attempt to figure out if any girl who’s ever shown an interest in him will sleep with him. Of course, in this volume we finally learn why Scott Pilgrim has been such a dummy for the past five volumes – he purged himself of any self-reflection and memories of anything that ever went wrong. In one of the many Gen X/Y references, this is personified by Nega-Scott. Until Scott completes the metaphor by merging with Nega-Scott, he cannot grow up. Because no one can be a true adult if they don’t ever deal with anything they ever do wrong.

Well, actually Gideon doesn’t have a very mature attitude either. And in addition to being in a state of arrested development when it comes to relationships, he provides the greatest chunk of dealing with the past outside of Scott merging with Nega-Scott and showing us that he told Lisa (not Kim) he was moving to Toronto. And Simon Lee didn’t kidnap Kim, she was dating him. Gideon not only created the League of Evil exes to control Ramona’s future love life, but he has also cryrogenically frozen every girl who’s ever rejected him. It results in more than just a funny ending to the main narrative, it’s probably the most concrete metaphor in the story. He has frozen the girls at the moment at which they broke up with him. If he wouldn’t mature and change, then neither would they. In terms of the way that it can feel when couples drift apart, the metaphor of Ramona disappearing when things get hard (last volume AND this volume) also works quite well. While some relationships have a clean break, I’ve found that many times it’s more of a process of drifting apart. And even when one party breaks it off, there can be months of drifting in and out of a semi-relationship as people either completely fall out of each other’s lives or end up gelling into a new non-intimate relationship.

As I mentioned at the beginning, Knives, though being the youngest and starting out the most naive, ends up having the greatest growth of any of the characters. A year has passed since the first volume and she’s now finally an adult. In America this ALSO means she’s now of the age of consent. But she’s also grown up quite a bit. She’s come to the realization that she spent an entire year of her life on Scott while he was being pretty crummy to her. The most adult thing she says is when she states, “I’m happy being alone right now, Scott. I’m trying to learn to like me. Alone.” While it can be so validating to have others want and desire you, it’s so important to be able to like yourself and learn what it means to like yourself. Otherwise you’re left without a sense of self if your significant other leaves you.

Readers of the blog in general and of this series specifically have seen me wonder about the realism of people realizing they’re gay rather than having always felt that way. Or sexual fluidity. That’s partially because it’s often done badly in the service of a cheap plot point. But it’s also because I wasn’t sure – I haven’t really had much experience with sexual fluidity. But speaking with James Tynion IV was a real eye opener for me in understanding just how fluid things could be in real life (at least in one person’s experience). So I see the Stephen Stiles reveal in this volume (hinted in some earlier volumes) as a pretty neat, subtle expression of how sexual fluidity can be a part of growing up – even in your twenties – far away from the confusion of puberty.

This volume seemed to have less overt Gen X/Y references or maybe I was plowing through things to quickly to properly take note of them. I did like the reference to Chrono Trigger in the Gideon fight, though.

So there we go, we finished. Overall, I thought the color was neither an overall improvement or detraction. It made some jokes not work, but other than that, it was just nice to see Bryan and Nathan’s interpretation of color in the Scott Pilgrim Canada. I got a lot more out of the story this time than I did the first time around. Part of that was from already knowing the story and being free to wander around instead of wanting to know what happens next. Part of that came from writing the series and looking for info that proved or disproved my various thesis.

As a post script – after I finished re-reading the entire story I rewatched the movie. When I saw it the first time I wasn’t yet in a place where I viewed movies as distinct adaptations from their source material. Even so, I still don’t think the movie is a good story-telling device. I think casting did a great job. I think the actors were spot-on. Michael Cera was Scott Pilgrim was brilliant. Kim Pine’s drone was vitriolic. Caulkin nailed Wallace. And so on. But, as a story-telling device it crammed way too much into a movie length. Had the books come out a little later, I think it would have made a great 1 season show on Netflix. That would have given the story more room to breathe. At the end of the comics I feel empathy towards Scott and Ramona. At the end of the movie, I (and my wife) despise them. There isn’t room for them to have enough depth.

One thought on “Scott Pilgrim’s Finest Hour (in Color!)”