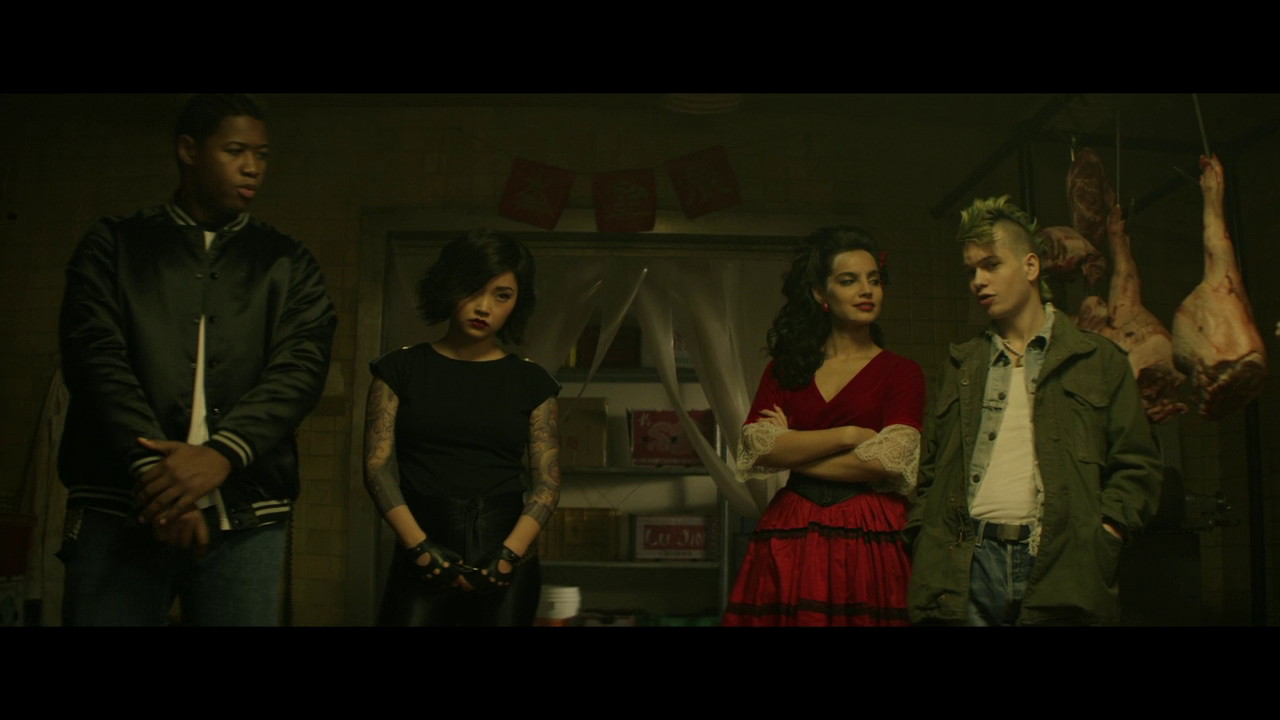 At this point in my life, I’m perfectly fine with divergences among adaptations of media. Gone are the days where I demanded TV shows and books to be perfect copies of the original material. Each medium has something they do very well – for example, superhero costumes tend to work better with the suspension of disbelief of the comics medium than it does in live action – hence the X-Men costume changes for the movies. So nowadays, when I experience an adaptation, I like to enjoy it on its own as well as take note of how the property had to be adapted for the new medium.

While it’s not unique (there are a few comic adaptations on Netflix), it’s definitely a bit rarer to have comics adapted to TV instead of movies. This can be challenging because TV shows tend on not to have budgets anywhere near movies, but Deadly Class seemed like a great comic to adapt because it’s just a heightened version of the 80s, not requiring the same special effects as a super hero movie. I’m not up to date on the Marvel movies, but after having seen the first Spider-Man and X-Men trilogies in the early 2000s, I remembered thinking the stories involved would work better as TV shows. That would, I surmised, allow for serialized storytelling that didn’t require the villains to “die” after each movie and wouldn’t require redoing the origins every couple years.

So, how did the adaptation of Deadly Class go? Well, in a certain sense, not well because it was not renewed for a second season. But let’s put that aside. The show runners make an interesting choice to start the show off a little more quickly than the first issue. On the one hand, this makes perfect sense – the economics of each medium is different. If you have a comic book, you’ve already bought that book; they have your money. But on TV, if they don’t get you hooked, you can change the channel. And, at least at a simplistic level, there’s no money if you switch channels and don’t watch the commercials. But, on the other hand, it robs the user of the sense of total despair that Marcus has from living on the streets. In the first few pages of the first issue, we see Marcus’ increasingly desperate situation as the days go by until he’s finally recruited into the school. Overall, things are more rushed with the storytelling.

When I took at look at the first two hardcover books, I wondered how Wes Craig’s art would be translated to the small screen. After all, it’s often hard to match the expressiveness of drawn art when it’s true art rather than simply panel after panel of characters moving around. The show’s answer was to just get the best of both and have many of Marcus’ flashbacks done as animation rather than live action. As a bonus, not only does it preserve what was great about Craig’s art, but it also (if rumors about Kill Bill’s animated scene is to be believed) allows for violence that wouldn’t make it past the censors if it was done with actors.

The most surprising change the show made was to focus more on the teachers, and a lot more on Master Lin. The comics, at least within the content of the first two hardcovers is strictly about high school in the 80s (amped up by everyone being at assassin school). Master Lin and the other teachers rarely appear. After explaining the premise early on, Master Lin mostly only appears to receive tattling by Shabnab and to discipline students now and again. (Or deal with the consequences of Maria’s Love Quadrilateral) It’s firmly about the kids and trying to deal with growing up and consequences of actions. The adults are mostly just in the way with their rules and tests. The show’s focus dilutes the premise from being only about growing up. Although, interestingly, despite things feeling sped up in the early season, I feel like most of the comic’s beats (from the first hardcover) were eventually hit by the end of the season. So, maybe the adult storylines were added to pad out the show? There’s also a bit of a distraction in the Master Lin hidden family storyline, but it does help round out transition from the original purpose of the school to its current incarnation. I remember briefly wondering about it going from helping the underdogs of society (reminded me a lot of the origins of the Faceless Men in A Song of Ice and Fire) to training a lot of elite kids. But the story keeps moving at a hundred miles an hour and I eventually put it aside. But the show has Master Lin struggle with this as well as how he has lived in relative comfort compared to his sister, who is non-existent as of the end of the second hardcover.

Overall, I thought the TV show turned out to be a very faithful adaptation of the comic book. It was neither a radical departure, nor so slavishly tied to the comic that it couldn’t change as needed for television. I think it probably could have done a bit more with Marcus’ early story. He also wasn’t AS MUCH of a jerk to his friends, but that’s also a Hollywood thing. See Movie!Katniss vs Book!Katniss or TV!Quentin Coldwater vs Book!Quentin Coldwater. We seem to need slightly more likeable protagonists on TV compared to what we’ll tolerate in written media. The Master Lin storyline was both interesting and, at times, a distraction, but it was neat to see where the show runners could evolve the story and make it their own. I’m somewhat bummed that it ended after just one season because some people (like my wife) are more into watching a comic adaptation than reading comics, but we still have the comics for the rest of the story.