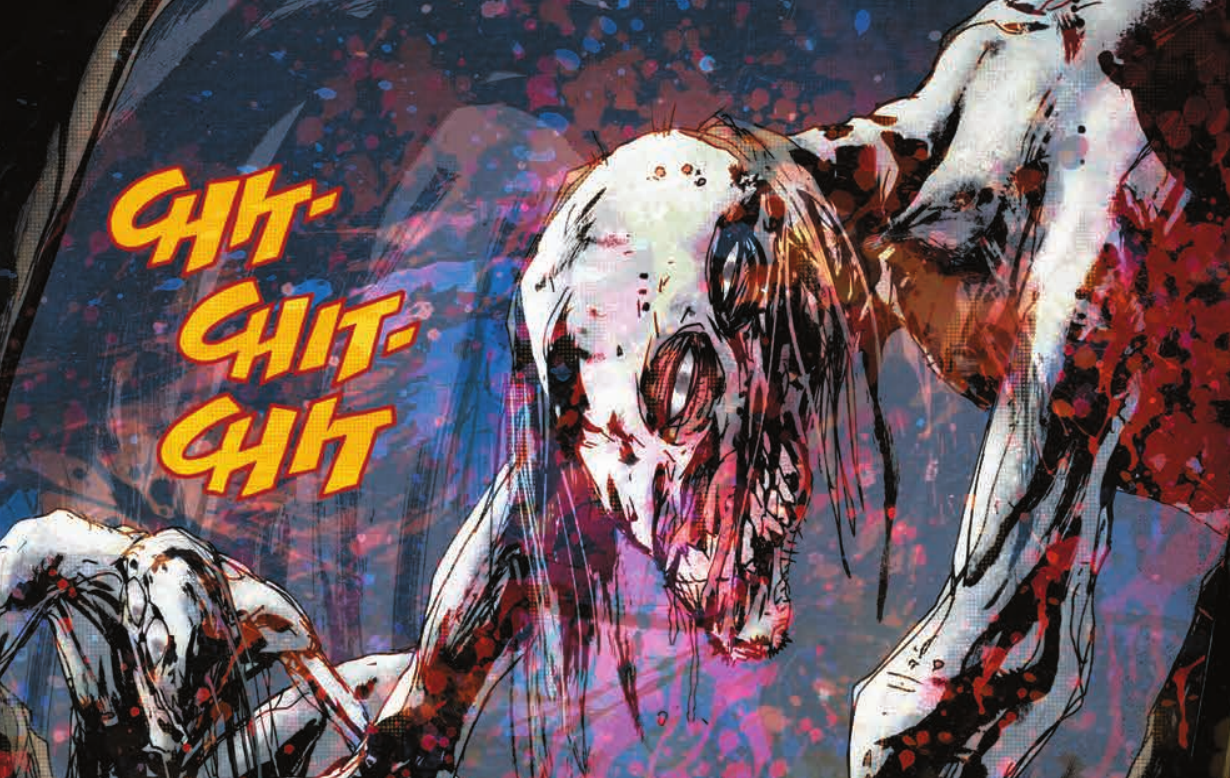 I read Wytches back in September before Baltimore Comic-Con because I wanted to be able to talk to Scott Snyder about how it was a personal meditation on what it means to be a parent. Snyder being as popular as he is, I was unable to get a solo interview with him this time, but I did get to ask a question about Wytches during his panel.

During the panel we learned that fatherhood has been on Scott Snyder’s mind quite a bit recently. His recent Batman arcs have explored that relationship between Bruce and Alfred. He also mentioned that he doesn’t do Bruce and Damien stories because it’s too real for him with a son around Damien’s age. I’ve also been thinking about fatherhood quite a bit. When I Wytches I had a 3 year old. But I knew my wife was pregnant with twins. Part of the reason this article is late is because they were born early and part of it is because I knew they were coming so I was trying to jam in every activity I knew would have to leave behind for a while when they arrived.

In Wytches (at least this first arc) Scott Snyder explores one of the great tensions of fatherhood: when to push and when to shelter. I know I still have many such moments ahead, but in the first three years I’ve already had to deal with this quite a bit. What many parents discover is that to allow your children to grow is to afford them the chance at getting hurt. When your child first learns how to walk, you have to give them the chance to fall. They also need to feel the confidence of the adults around them in order to feel confident enough to strike out and attempt to do new things. At the same time, many parents don’t want hurt to come to their children – hence the tension. Additionally, there are times when the parent needs to push the child because they need to reach a new milestone – in the early years this can include forcing them off the bottle or to go into empty rooms.

When are we pushing too hard? When are we refusing to see what’s before our eyes? Well, Scott Snyder certainly provides a pretty concrete example when Sailor’s father asks her to climb a Ferris Wheel, putting her life in danger to force her to deal with her fears. Of course, he’s got a few of his own issues – he’s up there drunk, after all.

But in the back half of this first arc we find out that it’s also about a darker part of parenting – living through our children. Of course, this being the dark mind of Scott Snyder (who also brought us American Vampire and some pretty dark stuff on his Black Mirror run on Detective Comics Vol 1), this is where the titular wytches come in. Many of us either purposely or subconsciously like to judge those parents so obviously living through their kids whether they are actors or beauty pageant kids. But, really, it’s a pretty basic parenting instinct that we all fall prey to in one way or another. Some parents try to give their kids what they didn’t have. Others try to make them mini-mes. And we all get something out of parenting, even if that’s not our primary reason for becoming a parent. It’s just that these are usually ephemeral things like love, respect, and pride. But Snyder posits a world where pledging a child nets you your deepest desires. And the truly addicted justify their actions saying they can just have another as though children were interchangeable like LEGOs. To be honest, who wouldn’t at least be tempted (although we can all nurse the thought that we wouldn’t succumb to the temptation) to pledge a child to evade death? It’s easy for me, at a relatively healthy 30ish to say it’s impossible, but what if I were nearer to death? Or what if I were facing an untimely death via cancer?

With Wytches, Snyder is forcing those of us who are parents to look into the mirror and see our darkest selves. To think about how even the best of intentions can go horribly awry when it comes to raising children. You don’t have to be a parent to enjoy it, but it will affect you most deeply if you are.

Before I go, let me just say that Jock continues to be the pro when it comes to bringing the terrifying images in Snyder’s mind to life.

I love discussion and welcome it whereever you happen to read this article – whether on Comic POW!, Goodreads, or whereever else it is syndicated.

Wytches  by Scott Snyder with art by Jock and coloring by Matt Hollingsworth. Support Comic POW! by buying it through this Amazon affiliate link: Wytches Volume 1 (Wytches Tp)