Never Bring a Witch to a Djinn Fight: Fables Vol 7 and 8 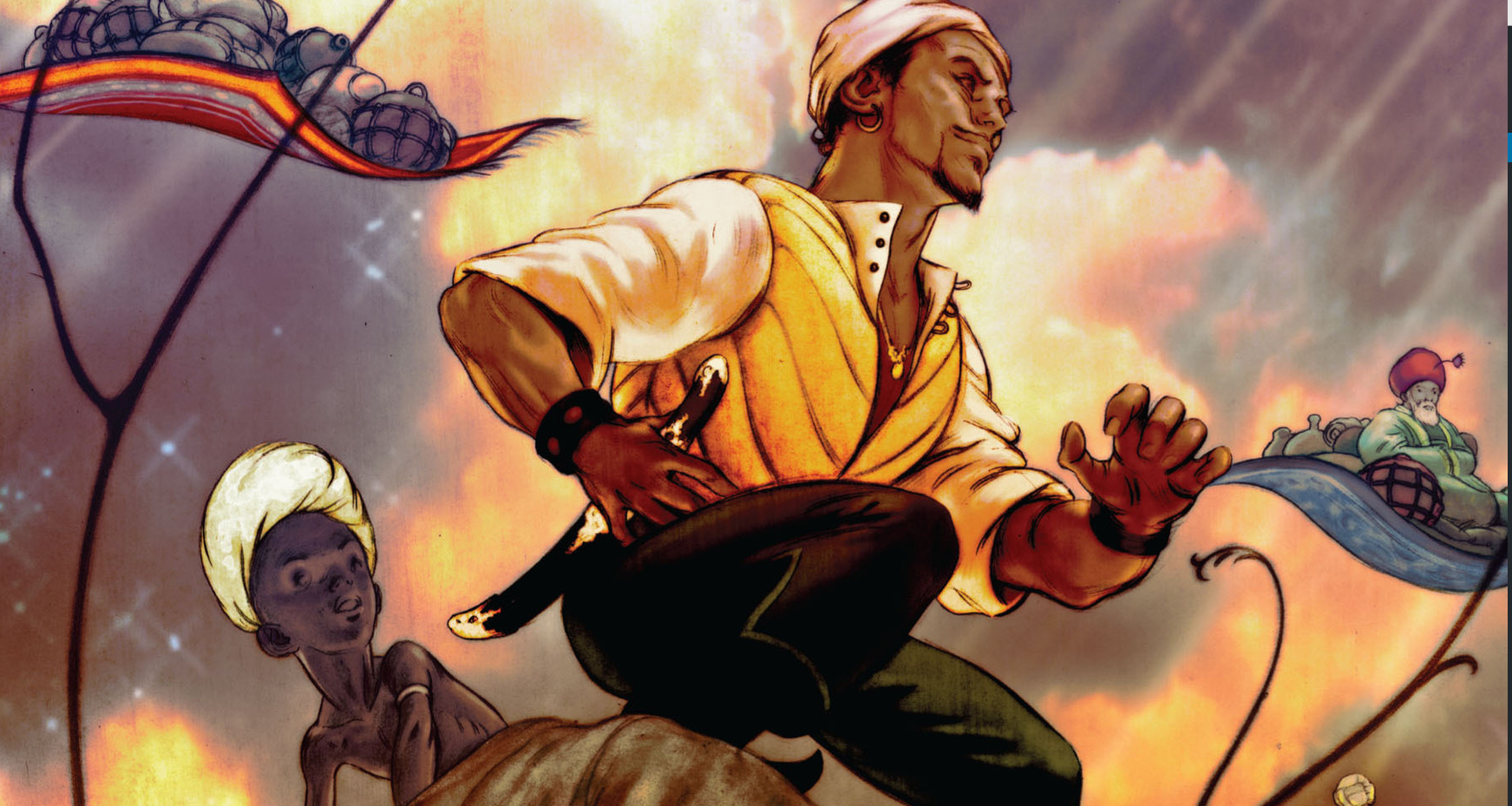 At the end of volume 8, we’re just past the 1/3 point without counting the spinoffs. Bill Willingham seems, at this point, to perhaps be following a three act structure. Of course, bear in mind, dear reader, that I’m reading these for the first time with only the knowledge that the mainline series ends at issue #150. Still, while much is setup for future volumes, he does seem to put a bow on all the plot points until now. Snow and Bigsby, who’ve had a will-they/won’t-they and star-crossed lovers arc since issue #1 end up married. Last volume we learned the identity of The Adversary and while it’s not in the storylines, the supplementary materials contain a map that note The Adversary now has an embassy in NY. Rose Red has taken responsibility and is helping raise Snow’s cubs. Prince Charming has also had a Han Solo-esque character arc. And so, since it was mostly clean up, not much happened. Still, there are some ideas to explore in these volumes.

The biggest one comes from Willingham coming right out and stating what I noted in earlier volumes: the analogy between Fabletown and the Israeli diaspora. The first time I noticed it was at The Ball in which they toasted “Next year in the Homelands” which is a reference to “Next Year in Jerusalem” and other such toasts. In fact, I noted in a later volume that, while the obvious analogy was with Israel, that the Fables have much in common with all refugees and some of their stories match those of people I know personally. I’m sure some Syrians will be toasting this year with “Next Year in Damascus/Aleppo/etc”. But in volume 8, Willingham calls out Israel specifically when he has Bigsby address Gepetto. He makes references to the 6 Days War and other conflicts in which Isreal punched above its weight class when it had an existential crisis. And so Fabletown attempts a truce with the Adversary by demonstrating how it will get revenge when attacked – as revenge for the wooden soldier attack, Bigsby blows up the entire sacred woods, preventing Gepetto (or so we think?) from adding to his wooden army corps.

Whatever you think of the real life Isreali situation, it’s certainly a tempting strategy for Fabletown to adopt. What makes it interesting is that, while the strategy is that of Israel against its neighbors, the actual actions are those of the Arab terrorists. Indeed, Bigsby mentions that the Adversary’s empire is so vast that he cannot possibly protect it all. Fabletown can always find an unprotected corner to attack and wreak havok upon. However tempting it may seem to the seeminly outmatched Fabletown, however, there may be one thing they’re overlooking – the strategy isn’t a long-term one, nor does it get them what they really want. It simply ensures that Fabletown remains, but it does not allow people to return to their homelands. It does not defeat the Adversary. It just creates a stalemate. Just as it has in the real world – Isreal is still under existential threat and the Arabs still do not have the state and territory they crave.

Although the Arabian story ends with a return to the status quo and may only be setup for soem future plotline, it does remind me a bit of a certain scene in the movie Snatch. After Tommy gets swindled by Mickey, but tries to once again play off the reason for having brought Gorgeous George with him, Mickey replies, “You don’t bring a man like that unless you’re trying to say something.” Once the reader learns how powerful Djinn are relative to the other Fables Willingham has exposed us to, it becomes clear that by bringing the Djinn to Fabletown, they intended to intimidate and send a message that they were negotiating from a position of power. Of course, Prince Charming and the others didn’t take that lightly. As with the Isreali gambit, while there’s certainly a valid strategy involved in negotiating while intimidating your opposite party, it can also backfire and lead to a more stubborn negotiation. Until robots are involved, there will always be an element of irrationality to negotiations. The leaders of a country may be willing to doom they country (and even themselves) to save face. At this point in the story, we don’t know if there will be ramifications to this negotiating style, but it may be that when the Arabian fables find themselves in a position of need, they may end up getting less help than they’d have engendered with a more amiable negotiating tactic.

As I said above, it appears that we have merely ended the first of three acts. I imagine the next fifty issues (more or less) will reveal the new conflicts that will evolve based on the new “Isreali” stance that Fabletown has taken and how the Adversary reacts to that.

Join me as I continue to write about Fables (and its spinoffs) and, also remember that I love conversation so feel free to comment wherever you happen to read this article.

This post is part of the thread: Fables – an ongoing story on this site. View the thread timeline for more context on this post.