A Masterpiece worth Reading: The Dark Knight Returns 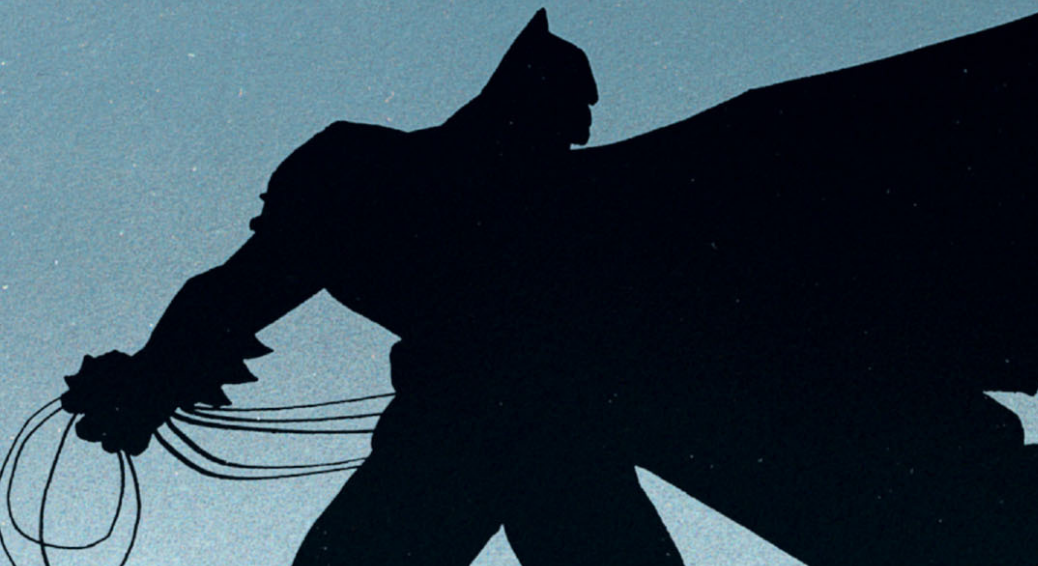 When I started the relaunch of Comic POW! while taking Christy Blanch’s gender dynamics-based comics MOOC, part of the premise was that comics are a product of the times in which they’re created. This has been true of many of the comics I (and other Comic POW! writers) have explored, but I feel that, among the classics of the 80s Revivals, this is most true of spiritual brothers: Watchmen and Batman: The Dark Knight Returns. Both are so steeped in the despair of the 1980s and the effects of the Cold War on the psyches of those living through the constant threat of annihilation. Both mine these depths to deconstruct the modern hero mythos (as seen through comic book characters). While Alan Moore has more lattitude with reimaginings of old characters DC Comics had acquired in an IP sale, Frank Miller has somewhat more impact with me given the decades of familiarity with young, mostly optimistic Batman. But it is a testament to the feelings in the Jungian consciousness that both More and Miller have their god-being (Superman/Dr Manhattan) as the ultimate weapon against Soviet agression. It’s also worth exploring how the consequences of their actions lead to both similar and dissimilar results.

I’d like to begin with the most jarring aspect of the book – TV coverage as the central premise. CNN and other 24 hour news networks were born in the 1980s. The new constant news cycle needed to be fed. Thus, for the first time as this density, news evolved from a simple statement of facts or lecturing by a trusted anchor, to debate shows in which various viewpoints presented their facts to the audience with a mostly neutral host serving as moderator. The Dark Knight Returns presents many of its thesis via these talking heads. Other portions of the story are presented in a more traditional news model. But not only was Miller tapping into the zeitgeist by employing news coverage, he was also giving the reader a different point of view for once. In the traditional comic, the reader is in the protagonist’s head. While there’s an illusion of an omniscient point of view because the reader often sees and knows things the protagonist does not (say what the antagonists are planning), it’s very easy for the reader to forget that he or she is being guided by the protagonist’s point of view. This is one of the reasons that critiques of superheroes (whether in deconstructive comics or in essays) can often seem like real lightbulb moments. The reader is so used to seeing Batman’s point of view that it can be quite illuminating to see how his actions might be affecting others in Gotham, The USA, or even contributing to his enemies’ issues. When Miller presents us with the news, he’s showing us how outsiders feel about Batman. To be sure, there are lots of opinions about his actions, but the opinions come from laypeople playing armchair quarterback. Even his supporters are left guessing at his motives and hoping they’re for the best.

Given how old this book is, readers certainly have the central premise in their heads – Batman has returned after an absence that left the city overrun by violent gangs. Once again, this is a product of its time. Violence had spiked in the 1980s and only began to fall in the mid to late 1990s. The urban scene seemed doomed to be overrun by prostitution, gangs, and graffiti. This Batman is probably one of the most realistic depictions of Batman ever, of course it would have to exist in a graphic novel outside of continuity. The reason for Batman’s retirement is the death of Jason Todd at Joker’s hands. In the regular continuity, Batman continues his crusade and eventually Ras Al Ghul resurrects Jason Todd. Todd becomes an anti-hero willing to kill and eventually confronts Batman about letting Joker live after he has killed not only Jason, but also many others. However, in the timeline of this book, Batman retires after Jason Todd’s death. It seems a touch more realistic to have Bruce quit after his quest, begun after his parents’ death, would end after the brutal death of his ward. This would be especially true if Batman still refused to kill.

Of course, this leads to Batman re-evaluating his rule against killing when Joker is released by an attention-seeking psychologist and begins killing children at a carnival. It’s revealing how important Batman’s considered that even Miller’s more violent Batman still can’t bring himself to kill Joker. He decides to cripple him instead, breaking his spine. I don’t hear as many people mention it, but we also learn quite a bit about what Miller thinks makes Joker tick. Scott Snyder has recently also examined the same thread as Miller that perhaps Joker is in love with Batman. His actions are a demented form of love and devotion. When he sees that Batman has returned to his work, we hear Joker say “Batman. Darling”. That’s not to suggest there’s any eros to the devotion. But Joker has often been seen as Batman’s most playful villain. His desire to be Batman’s most devoted playmate extends to the later comic in which he is angered that Harley makes Batman laugh. And so there is a sort of gamesmanship that Joker sees to his schemes. While different writers take this to various lengths, it appears to be a tango of sorts. So Joker finds himself distressed that Batman isn’t playing by the rules when he throws a batarang into Joker’s eye and Joker senses that Batman is actually out for blood. For some reason Batman isn’t finding his schemes funny and that’s troubling to Joker.

As I mentioned, an attention-seeking psychologist releases Joker from Arkham. The same guy also releases Two-Face, who goes on to commit crimes. There was definitely something in the air in the 1980s because Moore also has a psychologist who thinks he can cure Rorschach proven to be a bit full of himself.

One aspect of the book that I felt a lot more than I would have if I’d read the book earlier was Batman’s constant realization that he’s not a young man anymore. The things that came easy to him before now are much harder. Sure, those older than me would laugh at the idea that I could identify with being old, but I was quite an active young man. I can already see where my body cannot take as much punishment as it once could. It complains much more about my posture while at my desk, for example. It is yet another reason on top of others I’ve articulated in the past as to why comic creators should shed the chains of thinking that comic book readers only want to read about young heroes. I don’t think young heroes should ever go away as a concept, but I think there’s something valid to be gained by exploring what it’s like to age as a hero.

In direct contrast is Superman who is still in his prime, thanks to his alien biology. But more than just remaining young, Superman seems, outwardly, to be the one who has remained untouched by cynicism. It’s not until late in the book that we realize just how savvy Superman sees himself to be. He kowtows to humanity because humanity is jealous of those with greater powers. He feels that by working with the government, he is doing what’s best for humanity. However, in this story he ends up playing a mix between Dr Manhattan and The Comedian. Like The Comedian, he is actually sanctioned by the government – the only hero allowed to operate. Like Dr Manhattan, he is considered the USA’s answer to a militant USSR. However, just like Dr Manhattan, he serves not as a deterrent, but as a challenge. See, the reason that, despite MAD, the USA and USSR built up a nuclear arsenal is that in the game theory of countries – you cannot allow any country to have greater power than you. Otherwise you lose your sovereignty. So, faced with a hero who can prevent nukes from attacking the USA, the USSR deploys an EMP to devastate USA electronics. Even if the USSR still can’t attack, the USA is now effectively in the Stone Age.

Of course, having Superman fight for the USA does not only affect the USSR. After all, if a country has the ultimate weapon, why should it take the prudent course? Miller has his Reagan-alike overthrow governments left and right without fear of retaliation. (In what is, sadly, not far from what happened in real life) After all, he has Superman – who’s going to stop him? Of course, in a great sight gag, Miller has Reagan-alike deliver the bad news that things may have gone awry while wearing a nuclear waste containment suit. (Which, of course, the US public lacks)

Quickly, there are some great gags with respect to Robin’s parents not having a clue what’s going on with their daughter and implied that they’re often high. In addition to providing some dark humor, it’s likely a commentary on absentee parents.

Finally, one of the major plot points in the book concerns Gordon’s retirement. It’s well known he didn’t pursue Batman for his vigilante activities. Gordon was essentially breaking the rules (and laws) in doing so. The new police commissioner promises to catch Batman for his wrong-doing. While this does allow Miller to explore the idea that sometimes things are better when we don’t follow all the rules, the book doesn’t allow him to explore the dark side of this. In other words, sure, it’s great that Gordon breaks the rules to allow Batman to fight crime, but corrupt cops are also breaking the rules. And when does breaking the rules cross the line? Miller wouldn’t have been able to explore this without muddying the book, but it’s certainly worth considering that it’s not quite as easy as Gordon was right.

I’ll say it emphatically, this book deserves its place as one of the key Batman stories. It’s not perfect and it’s definitely rooted in the 1980s, but it’s a very well-done book. It allows us to learn more about Batman and more about ourselves and our country.

One thought on “A Masterpiece worth Reading: The Dark Knight Returns”