The Puppetmaster: Fables Volumes 5 and 6 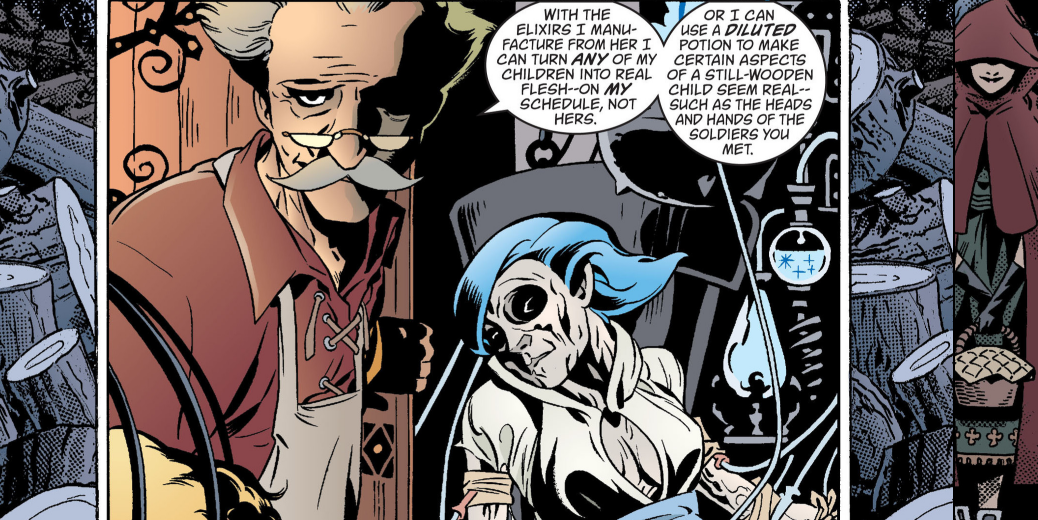 Volume 5 is all over the place, but it does seem to continue to follow Willingham’s trend of providing some thematic respite after a heavy plot. So this volume starts off with the notion of Bigby’s spies around the world, particularly Cinderalla who, with me reading this in 2015, I know will have her own miniseries in which she continues her spy adventures. Cinderella uncovers that Ichabod Crane was selling information to The Adversary. Bigby Wolf kills him, inviting the question of whether this makes sense after he was unwilling the kill the mundy who was going to out the community. After a bit of thought, it’s apparent this is an entirely different situation – Ichabod is committing treason. Additionally, it’s possible Bigby is not  quite as ready to compromise as he was before the attack of the wooden army.

Volume 5 then takes a left turn into Bigsby’s time in World War II. This issue came earlier in the original releases, but would have been a bit more of a show stopper in the previous trades. This way it just fits into a trade that’s somewhat meandering and just trying to close up loose ends from the previous volumes. The rest of the volume concerns the new administration running the fairy government. As is often the case, it is much easier to agitate from the outside than it is to work within the bureaucracy as Prince Charming, Beauty, and Beast learn. Charming slowly grows into his role although he has a bad situation on his hands when it turns out that the reason the magical fairytales were charging so much for charms is because they were at their capacity for maintaining magic. Beast seems to most easily grow into his role. Although he doesn’t have as much time in front of the reader, his time as the enforcer of the law seems to mirror Dick Grayson’s time as Batman. There are personality differences, but there are also some things that have to be done the same no matter who’s wearing the badge. Finally, Beauty seems least equipped to deal with the demands of Snow White’s job.

There’s a very small subplot following Snow White raising her and Bigsby’s kids at The Farm. Bigsby’s father, The North Wind, shows up. There isn’t much that’s advanced in that plot other than her zephyr child being sent to Bigby.

Finally, we’re reminded of the guy who realizes something weird happened as he’s the only one not affected by the magic that makes the mundys forget the wooden war. My guess is that he’s a lost fable or something like that – otherwise why wouldn’t it affect him?

Volume 6 begins with a series of issues about Jack of The Fables who was thought to have stolen a one of Bluebeard’s rooms full of money and taken off across the USA. In addition to being an introduction to his mini-series, it’s a pretty fun story about him going to Hollywood and creating movies about himself. This makes him so popular among the mundys that’s he’s essentially invincible. Outside of that, the scheme has no other affects on the story thus far. It is interesting that, other than challenging The Devil in the swamp, this is the only other scheme that’s actually worked for Jack.

The rest of Volume 6 is mostly dedicated to Boy Blue in The Homelands where he hopes to find Gepetto and the real Red Riding Hood. Before we get to that a quick mention of the fact that Prince Charming sends Mowgli off to find Bigby and Honest John is convicted of treason because he was stuck loyal to his original king and was therefore feeding info to The Adversary.

The reveal that Gepetto was not stuck working for The Adversary, but was (like The Wizard of Oz) the true adversary was most powerful because of the way in which it came about. Bill Willingham has used this comic to make many large and small statements about government and power. Again, as I mentioned above, he shows how sometimes the things we hate our governments doing have less to do with the people in charge and more to do with what’s necessary when governing. Similarly, Gepetto’s descent into tyranny starts off with good intentions. The village elders see that Gepetto is able to create lifelike puppets with the help of the Blue Fairy. Additionally, her magic makes the puppets loyal to Gepetto. When their king becomes mad, they ask Gepetto to replace him. No real harm done – in fact lots of good is done as the king is now a kind and wise king instead of a crazy one. But when his son is clearly going to be a horrible king if he ascends, they replace him. This essentially continues in an ever-widening circle until Gepetto is the ruler of an empire. Again, none of this was done with malice and it could be argued that most citizens found their lives improved. Unfortunately, Gepetto discovers that empires need constant expansion to prevent stagnation. This is not so different from the way modern capitalism operates. Any company that is not growing is considered not to have conquered its sector, but to be a failure. So, from good intentions are born the wars that led to death and exile of the fables who did not want to go along with their lands being conquered. It is often this mundane lack of hatred that leads to governments killing and enslaving those who are not part of their entity and that’s a pretty powerful statement for Willingham to make. Additionally, he goes from being a kindly old man who wants a real boy to someone who subjugates others simply to keep HIS empire running well as well as willing to enslave The Blue Fairy.

Now that the mystery of The Adversary is solved, it’ll be interesting to see where Fables goes. On the one hand, there are the daily quibbles of the Fables in The Real World. On the other hand, it was revealed that The Adversary is terrified of modern weapons arriving in The Homelands as they allow Fables to hold their own against those wielding magic.

What do you think? I enjoy conversation in the comments!