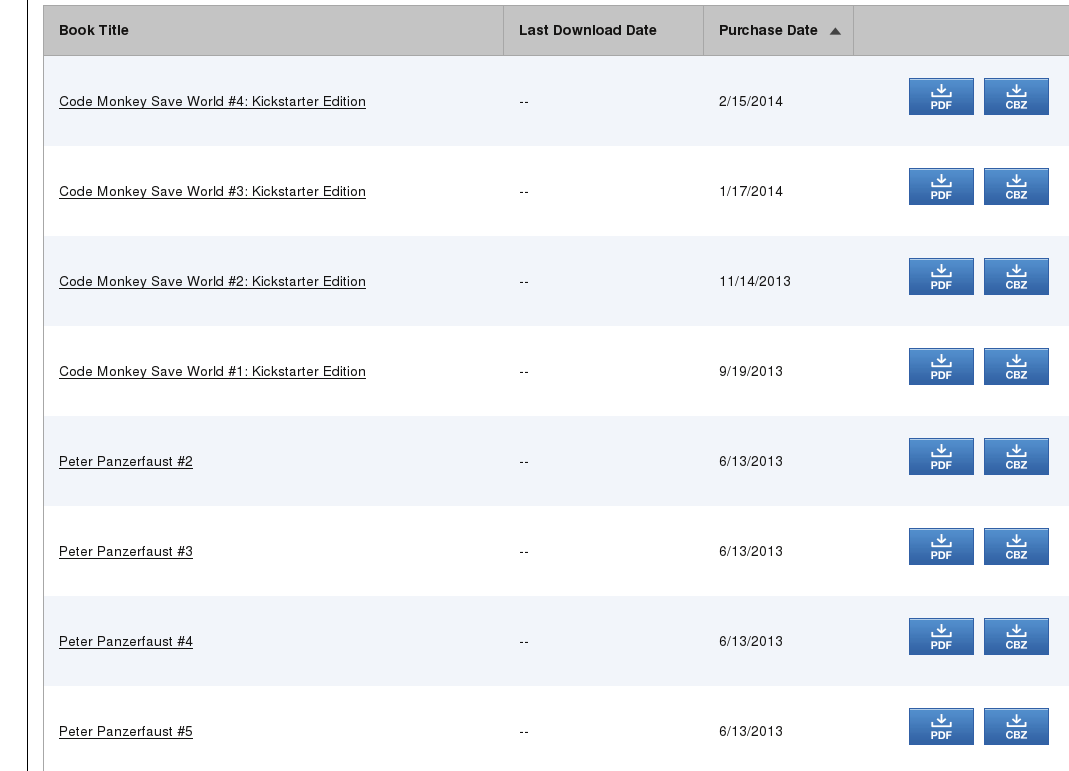 As I mentioned during the announcement of Top Shelf’s DRM-Free store, I really like Comixology’s patented Guided View way of viewing comics. It is the best way to view comics that weren’t made with the expectation of being digital (eg The Private Eye, Lil Gotham) short of rotating a large computer monitor. Guided View isn’t perfect, but I find it works close enough to perfect. However, as I’ve mentioned over and over in different articles, I’ve been badly burned by digital restrictions management (DRM) over and over again. So I stopped buying comics on Comixology.

It helped that Image Comics, Dynamite, and Top Shelf offered their comics DRM-free. OK, so I couldn’t buy comics from the Big Two digitally, but that didn’t bother me so much. Still, it stunk that I had to decide between Guided View and DRM. So I was quite happy when I got an email a few weeks ago announcing that, for certain publishers, DRM-free backups were available. This is what my backup page looks like:

I decided to grab the fourth issue of Code Monkey Save World to see the quality. A popup notified me that watermarks would associate the files with my account.  I don’t mind as long as it’s not too onerous. If that’s what it takes to get DRM-free – why not. Especially if it convinces the Big Two to join in. I loaded up the CBZ in QComicBook and didn’t notice any watermarks.

Checked out the PDF version in Okular:

Again, couldn’t notice any watermarks. Maybe it’s because I’m using Linux and Linux programs tend not to respect silly things like that. Or maybe the watermark is meant to be invisible unless they suspect you of sharing things? I don’t know. But I’m happy with the quality provided.

So, let’s say you want to give your support to Comixology’s DRM-free comics to prove they’ve made the right decision. (We should always – when possible – be sure to buy stuff given DRM-free so that publishers can see that it’s not a mistake and we will buy these instead of acquiring them illicitly). Then you would go to a comic and look for the (current) universal symbol of downloading. An arrow onto a hard drive. See this screenshot of the Girls #1 page for an example:

After MP3s went DRM-free it was a long time before any other industries followed suit. But recently both book publishers and comic publishers have gone DRM-free. I would encourage my readers to try and prefer DRM-free comics over comics with DRM to see if we can convince the Big Two publishers to join the bandwagon. Hopefully they know that their current strategy is not stopping anyone from getting their comics without paying them. Buy providing DRM-free comics they reward those of us who want to give them money. Instead of forcing us to the torrent sites for digital versions of the physical books we’re buying. Or, in my case I’ve stopped buying physical books from any publisher because it just takes up too much room in my house.

So what’s the best choice now? Where’s the best value? Well, with Image Comics if you buy directly from them you also get an EPUB version in addition to the CBZ and PDF. I don’t read my comics on an ebook reader and tablets can read any of the three formats equally well. So whether that’s worth it for you is something you’ll have to decide. What about the percent of the money that goes to the creator? I tried to get an answer from Image Comics PR, but was unable to get an answer by press time. If Comixology were simply a middle man (as Amazon is for music), then I would say it would be simple – going straight to Image, Top Shelf, or Dynamite must give more money to the publisher, if not the creators themselves. However, Comixology is not just a middle man. They add value with their Guided View. Additionally, a few months ago they added the ability to “subscribe” and have the comics already purchased every release-day as if you had a box at your local comic shop. So, if those features are worth it to you, you no longer have to decide about DRM and I think it’s worth getting from Comixology.

Either way, let’s cheer them and the publishers for ending their punishment of legitimate customers and recognizing that we’ll do the right thing.

5 thoughts on “Comixology Now has DRM-Free Backups (With Caveats)”