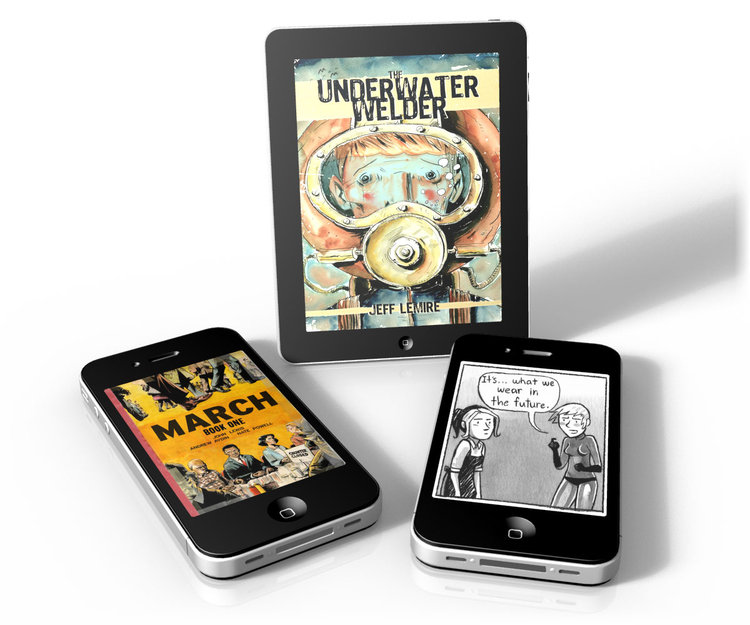 In February Top Shelf Comics introduced its new DRM-free store. This makes it the second major comic publisher after Image Comics to introduce a DRM-free store. This is actually a pretty huge deal as more of us consider digital as a great alternative to long boxes and treks to the comic shop on Wednesdays. (The loss of in-person camaraderie is a topic for another post)

Why should you care about DRM and what is it? On the off chance that you haven’t heard about it, here’s the quick primer: DRM stands for Digital Rights Management. But many of us like to think of it as Digital Restrictions Management because it tends to limit what you can actually do with your comics. If you’re like the typical comic fan, you grew up (or are growing up) sharing comics with others. Comics cost a ton of money, especially for kids (or adults on a budget) so the way you learn about new titles and characters is swapping with your friends. Legendary Batman writer Denny O’Neil mentioned doing this as a kid and it being the reason he was able to learn about all the different types of comics. With DRM you can’t do that. In fact, with DRM you can’t share your comics with your spouse unless you physically give them your tablet. That’s idiotic – new technology shouldn’t be hampered by the limitations of old technology. I should be able to read Saga at the same time as my wife or while I’m reading other comics from my collection. If the store just goes away, you lose your entire collection despite the fact that you are often paying just as much for the digital comics as print comics if you’re buying it the day it comes out.

Just as music moved away from DRM (and books are slowly following suit), it can only be a good thing for more and more publishers to launch DRM stores. Now, I need to ask you, my loyal readers to please use these DRM-free comics responsibly. Both Top Shelf and Image Comics have released only a small portion of their catalog DRM-free. If Top Shelf suddenly sees that no one is buying these limited numbers of comics because everyone’s sharing them online then we’ll NEVER see DRM-free Spider-Man or any title from the Big Two. Be moral about what you do. In real life you’d probably share your issues with your immediate family and one or two friends. And if you share it outside your household with friends, make sure you encourage them to buy their own issues so they can support the creators and send the message to Top Shelf and Image that this is a viable way to publish comics.

There are a few negatives to the DRM-free comics, but I think it’s more of a consequence of the fact that right now most DRM-free comics are illicit copies. So while one of the best formats out there is the CBZ/CBR, there is no standardized way of storing metadata with the file as you can with audio files. That means you have to be a bit more creative in how you organize your comics so you can easily find and sort them. Hopefully, this will change if DRM-free comics gain momentum. DRM-free comics also, at this point in time, require a bit more creativity if you want the ever-present nature of something like Marvel, DC, or Comixology’s app. There’s certainly something awesome about being able to access your comics anywhere at any time. However, this does highlight one benefit of DRM-free comics – they can easily be transferred to any device. That means you can have them on your laptop on a plane without needing to spend money for inflight WiFi.

Of course there’s one more negative. Comixology’s Guided View is AMAZING. It really is my favorite way to read digital comics – especially if I’m reading on a computer screen with its horizontal orientation. (It’s slightly less necessary on tablets) Some CBZ/CBR programs try to approximate it, but it tends not to work well if the artist uses non-standard page layouts. Again, I think this is something that could easily be solved if DRM-free comics became mainstream. I don’t know if EPUB could be extended to have a Guided View-like functionality, but if not, we need something like EPUB that all the publishers could use that would allow the publishers to specify where the camera should go when in a Guided View-like mode. Hopefully this new format would also have the flexibility of CBZ/CBR to pull out the raw images which is great for high fidelity screenshots (to illustrate articles) and other fair use projects.

At any rate, show the publishers that DRM-free is what we want so that we get a better future where we actually own the digital comics we buy. Shop at the DRM-free stores and don’t share irresponsibly/immorally.