There’s only one more Wednesday between now and Baltimore Comic-Con!  (5-7 Sept) If you live nearby you REALLY should come. There are top talent creators coming, but without the over-crowding of New York Comic-Con. Here’s a blitz of Comic-Con updates to get you excited about coming!

Christina Blanch is coming back this year. She taught the great Gender in Comics SuperMOOC that led to this site’s revamp and she’s teaching another this summer. She also write The Damnation of Charlie Wormwood on Mark Waid’s Thrillbent Comics and Dynamite is going to be providing it in print. I interviewed her two years ago for Player Affinity and look forward to talking to her again.

We all have love/hate relationships with publishers. Part of their job is working with the editors to make sure that characters stay true to their roots. But the other part of their job is looking after the money which can make the responsible for reboots and summer events. Either way come and show your love or hate (respectfully!) to Dan Diddio as DC’s co-publisher will be at BCC.

Holy, freakin’ heck – Peter “Chewbacca” Mayhew will be at Baltimore Comic-Con. Do you need another reason to go? 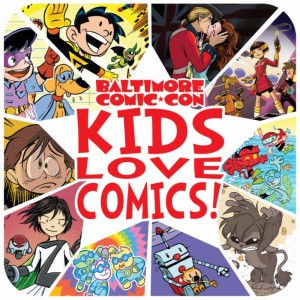 Do you know what’s awesome about Baltimore Comic-Con? Kids under 10 get in free! Not only that, but BCC makes sure to have a kid-friendly area that they describe this way:

Activities in this super cool section of the show include:
* Interactive Comics Talks from some of Kids’ Comics top creators, such as Ben Hatke (Zita the Spacegirl), Andy Runton (Owly), Mike Maihack (Cleopatra in Space), and more!
* Design your own super hero cape and mask
* Doodle Scribble Draw! Kids Drawing Gameshow!
* Creator sketches and autographs
* Kid-Safe Star Wars Light Saber Training
* Puppet making with Chris O>Matic!
“The Baltimore Comic-Con has always been a welcoming, family-friendly show, and every year, we aim to make the Kids Love Comics Pavilion inspiring to young comic fans. Not only do we want kids to read comics, we show them how they can create their own! I wish there was an event like this when I was a kid,” said Mark Mariano, creator of the Happyloo graphic novel series, and co-organizer (with John Gallagher) of the kids section. “It’s so cool that I bring my own family here every year,” added Gallagher.

One of my favorite parts of Baltimore Comic-Con is the costume contest!

It’s making a come-back. Here are the prizes:

As part of a Baltimore Comic-Con press release, it was announced the Dynamite Comics joins Image, MonkeyBrain, and Top Shelf in offering DRM-free comics. As seems to be the new trend, this came after doing a Humble Bundle. Come on, DC and Marvel – you guys are pretty much the only hold-outs now!

BOOM! Studios will make BCC the first time they ever show up on the east coast. I don’t really read any BOOM! Studios comics, but they will have sketch artists from Regular Show and Adventure time there doing custom covers for $30. I may just have to get one for myself and one for one of my brothers who’s obsessed with Regular Show.