Not the Best time to be a Sidekick 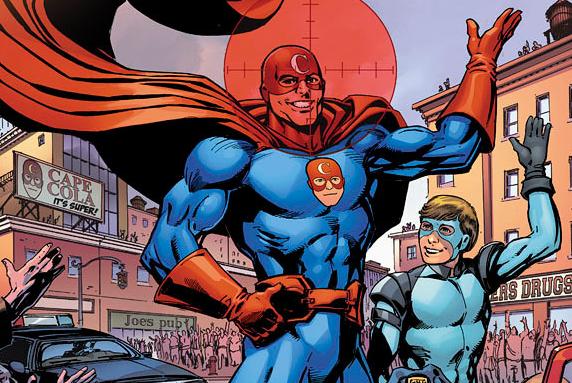 Super hero sidekicks almost have the same joke status nowadays as Star Trek’s Red Shirts. In a lot of ways they’re a relic from an old era before people asked questions about reckless child endangerment. We seem to have transitioned away from the sidekick to the teen hero as a substitute. The main exception is Batman who has a Robin for historical reasons. Even there, the trend for more realism in comics (kicked off in large part in the 1980s) we’ve seen the consequences as two Robins have been murdered. (Although Damian is more of a bit of family violence than being targeted for being a sidekick – if you want to get technical about it)

So it’s interesting to see J. Michael Straczynski step in to provide a different dimension with Sidekick, announced today for a 7 August release date. It tells the story of Flyboy who has been the sidekick to The Red Cowl for the past three years. The Red Cowl is murdered and Flyboy decides to pull a Nightwing and become a hero in his own right. Unfortunately, in the world Straczynski sets up for Sidekick, the sidekicks have the same sorry reputation as they do in the real world, so no one takes him seriously. That, plus the way the description of his time with The Red Cowl seemed to set this up for a slapstick, but then I got to this part of the press release:

“Sidekick is designed to turn the usual superhero tropes upside down,” said writer Straczynski. “Flyboy’s gradual disintegration into madness and crime is fueled by his desperate need for approval. His downward spiral slowly drives him to the dark side of the law, where he begins an affair with the villainous Moonglow Twins, who one night whisper something to him about the fate of his mentor that he could never have imagined possible. That secret may be the key to Flyboy’s redemption, or his damnation, giving him something to live for… and maybe, just maybe, something to kill for.

This title seems like it’s going to be similar in nature to Mark Waid’s Irredeemable – a realistic look at comic tropes given a world with super heroes (as opposed to Watchmen realism where everyone but Dr Manhattan was just a regular Joe trying to fight crime) as Flyboy struggles with what it means to be in someone’s shadow and unable to come out. Image Comics continues to excite me and I can’t wait to check this title out and write about it here on Comic POW!