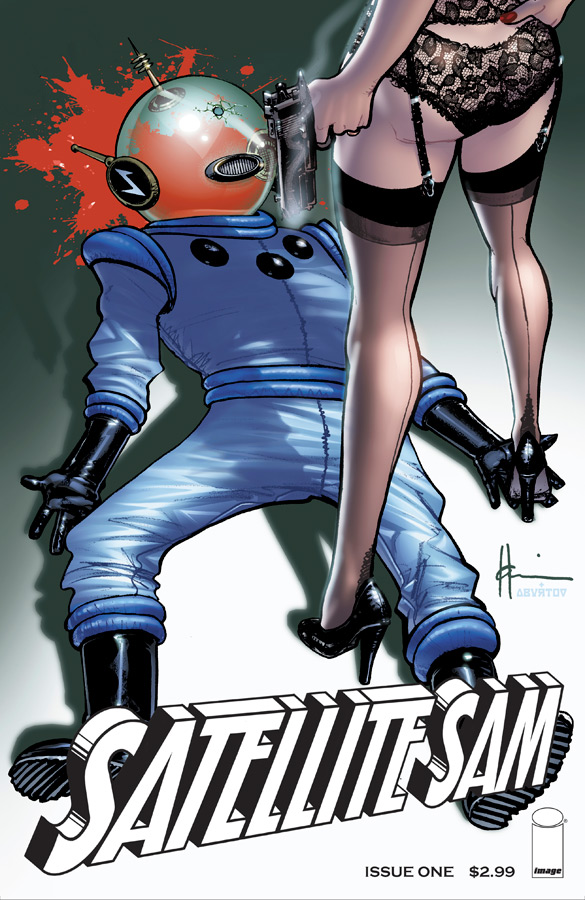 The AMAZING Matt Fraction (see today’s post in which Kari explores his teamwork with Aja on Hawkeye) will be teaming up with Howard Chaykin for a new black and white series called Satellite Sam. I’m extremely excited for this series both because of Fraction’s involvement and because of the time period in which it takes place: 1951 in the early stages of television becoming one of the most powerful forces on the planet until the advent of the Internet. I’m a history junkie and especially so when it comes to media. Additionally, I’ve been wishing more people would realize that the 1950s weren’t as perfect as we assume when we watch TV and movies from that time period. So this description just got me so excited:

The Golden Age of Television, a time when innocence was as manufactured a fiction as the perfect families in the comedies that captivated audiences at home. … [it] takes a look at the darkness behind the small screen when, in 1951, Carlyle Bishop, the star of the beloved serial “Satellite Sam” turns up dead in a filthy flophouse.

Carlyle’s son Michael has a hunch that his father’s death was anything but natural, but the only clue is a box full of photographs of women in various states of undress — and Mike can’t bring himself to stay sober long enough to make any sense of it.

“It’s a detective story, a history of television, and a record of addiction, sex, and depravity during a time when the antiseptic shine off Ozzie and Harriet obscure what was really happening in the world,” said writer Fraction. “And these are just a few of the many joys that come from telling a story about television while it was being invented as a mass medium in New York City.”

The creative team researched television’s early days in preparation for the series, getting a feel for the era and for the people who lived real lives while inventing an idealized — and fictionalized — image of families and relationships.

With themes like that, you can bet we’ll be covering it here on Comic POW! The first issue will be out on 3 July and we’ll most likely cover it after the first story arc ends or after the first few issues – whichever comes first. (Although there’s always the possibility that the first issue is so awesome that I write something based on that to whet your appetites.)

I really love listening to the video game podcast The Giant Bombcast. One of my favorite off-topic moments is when the podcasters talk about Doomsday Preppers. So I was pretty excited to read about this new five issue mini-series from Image called Sheltered. It’s written by Ed Brisson with art by Johnnie Christmas. I like what Brisson has done – rather than explore the mindset of the types of people who setup Bugout Bags and compounds, he’s taking a look at what it’s like to be raised this way in a book that’s part Blast from the Past and part The Village.

… follows the consequences after Safe Haven’s younger generation, raised in paranoia and isolation, rebel against their parents and take over the compound. Two leaders emerge from the rebellion: the teenagers Lucas, who led the revolt,  and Victoria, who leads another group of kids in their escape. With Victoria set to expose Safe Haven, Lucas and his faction are determined to hunt her and her group down before they reach the nearest town, forty miles away through dangerous wilderness.

The idea for Sheltered grew out of Brisson’s interest in end-of-world scenarios. “Initially, I was researching preppers — people who are actively preparing for natural disasters, nuclear war, societal breakdown — to get and idea of how people would be able to survive any of the above,” said the writer. “My initial idea was to do a post-apocalyptic story. Through my research, I started to get obsessed with the culture — from the outside! I don’t own a bunker! — and how it would affect children raised in that sort of environment.”

The first issue comes out 10 July and it sounds like something you’ll definitely want to pick up on Comixology or have your local comic shop put into your pull list.

In what would be the most exciting news were it not for the Matt Fraction series, The Walking Dead is being translated into Spanish! It’ll be coming out in the USA in September 2013. This will be a great boost to the series’ fanbase by making it available in the native language of one of the largest spoken languages (outside Chinese and Hindi). As a bilingual person who’s married to a bilingual person (with a different second language) as well as my long-standing manga fandom I’m obsessed with seeing how works translate into other languages. After all, some things just don’t have a direct translation. As of right now I’m planning for Dan and I to take a look at the translation for interesting word choices and phrasing and producing something for Comic POW! So look for that later this year.

One thought on “New Image Series and One Awesome Surprise”