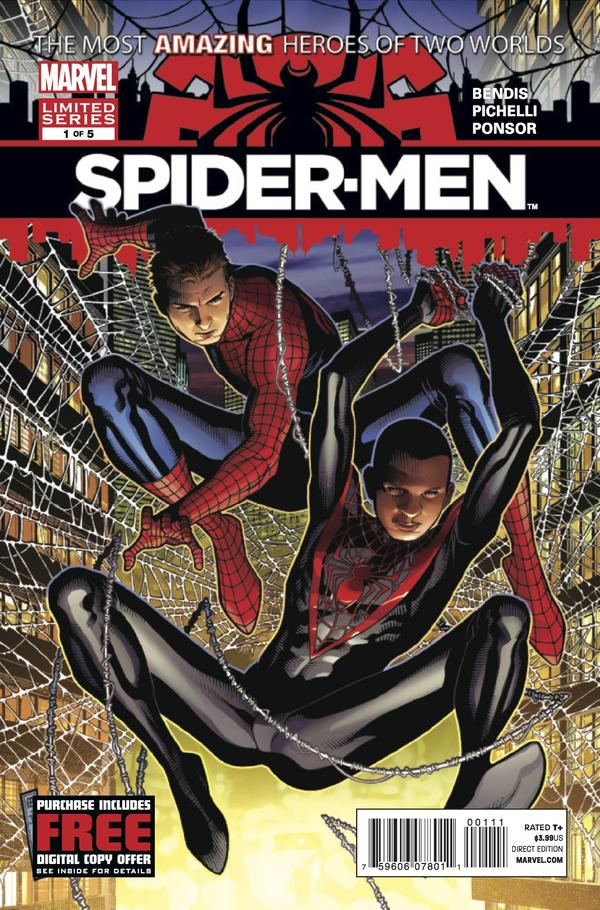 transcript:
Intro:
Welcome to the third episode of the Comic Pow! Video Reviews.

This time around we’re discussing Spider-Men #1

Review:
Let me just start off by saying what many of you were thinking. Heck, it’s what I wrote in my coverage of the announcement of the announcement of this mini-series. Marvel said, back when they created the Ultimate Universe, that if they ever had a crossover between the mainstream and ultimate universes it would mean they were officially out of ideas. So….there you go – Marvel’s out of ideas.

I definitely have to say I was tentative about this crossover, although getting Brian Michael Bendis to write it went a long way to allay my fears. While he has a reputation for making all his characters sound the same, I’m fine with his writing. The biggest problem I’ve had is that they all sound like witty dialogue machines as if they’re all characters in Buffy or some other Whedon property. (Maybe that’s why they selected Whedon to do the Avengers movie since Bendis is writing the books?) That’s not a problem when he’s writing Spidey, though since he’s supposed to sound witty.

This premise is also interesting, although we don’t know much about it other than that both Spider-Men are going to meet. From our universe we have Peter Parker, who’s out of college by now and working at Horizon Labs making all kinds of neat gadgets. From the Ultimate Universe we have Miles Morales – an elementary school kid who takes on the mantle of Spider-Man after the Peter Parker of that world dies while still in high school.

As far as a first issue for a five-part mini-series, this issue is above average. It starts up with the usual 616 “I don’t get no respect” Spider-Man scene that is almost the canonical way to start any Spider-Man arc. As usual, Spidey can’t catch a break with the authorities. As he swings away from that mess, he comes across a building emitting a weird light. Bendis knows we will question Spidey’s decision making process so he has Spider-Man lampshade the fact that it’s dumb to just go into a strange light-emitting building without preparation.

There we find out that Mysterio’s strange device that will propel Spider-Man into the Ultimate Universe. This was the weakest point in the issue for me. But after doing some research on Comic Vine, it turns out that what plays as a mystery for people like me who only read the 616 universe, should actually be a huge clue for readers of the Ultimate Spider-Man. My original problem with the role Mysterio played here was that in the 616 universe he’s a special effects guru. Essentially, if the Mythbusters guys turned evil, they’d be Mysterio. In the most recent arc, Ends of the Earth, he essentially creates a set to fool Spidey into thinking Doc Ock had destroyed part of the world. And later on we see he’d created a giant robot. So it seemed a little out of character for him to be using Stark tech to create a transdimensional teleport. Not his wheelhouse. However Ultimate fans would have two clues that he’s not the Mysterio we think he is. He makes a remark about missing out on Spidey’s death. He wasn’t there when the other villains killed Parker. Also, Iron Man finds out Ultimate Mysterio is using Stark Tech. Of course, I could be way off base, but other 616-only fans like me might be wrong in thinking it’s too convinient to be using him as the catalyst for the dimensional travel.

I don’t want to spoil what happens in the Ultimate Universe, but I think Bendis does a good job of making Spider-Man act intelligently to try and figure out what’s going on. The timing on when he meets Miles in this issue may have some questioning the timing on this mini-series. Since most story arcs are 3-5 issues and this is a 5-issue mini-series, I think it can work just fine.

rating:
I give it a 4.5/5 stars. The art is wonderful. The inner monologue seems on point. The ½ point loss is due to the somewhat forced way Parker ends up in the Ultimate universe. I look forward to the next issue.