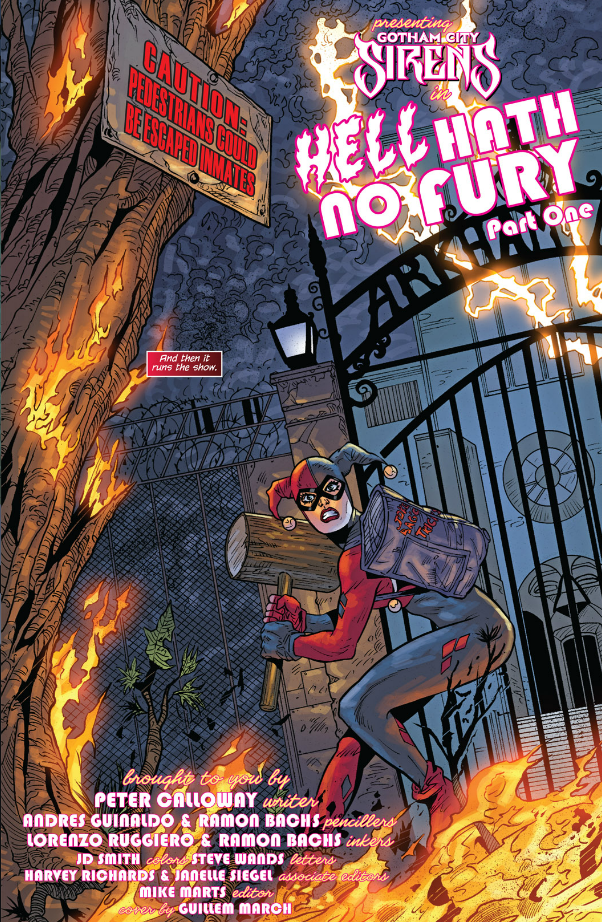 I’ve written a lot about ComiXology recently and, really, I just discovered one of the biggest benefits.  And that’s the fact that I can go back and find issues that have come out months or even years ago and I can get them really cheaply.  I don’t have to worry about a premium on the fact that they are issues that are very rare.  I can get issues like Batman #38 for only a dollar or two dollars.  So I decided part of what I’d do at Comic POW! is take an issues that I’d like to take a look at from Comixology and the issue’s going to be at least a month old if not a little more and in that case all these reviews will have spoilers and reveals because we know what happened.  The issues are old enough that you don’t have to worry too much about spoilers.

Today’s issue is Gotham City Sirens #20.  Now Gotham City Sirens is the comic book that is most directly responsible for the fact that I’m now reading comics again.  I went into my local comic shop one day just because my wife wanted to get some TCBY and it’s in the same shopping center and I happened to see Gotham City Sirens.  And it had my favorite [DC] character Harley.  And I also like Poison Ivy a lot.  Catwoman I could care less about, but I thought it was interesting so I decided to check it out.  Long story short: I’ve bought hundreds of comics in the last year and I’m really enjoying myself.

When I got to Gotham City Sirens it was almost time for the New 52.  And I feel like the series ended a little prematurely and I was not really a fan of the last couple issues.  But that’s where I started.  And then I went back and started getting the trades.  Between the third trade and what I had I was only missing a few issues.  So I decided to get what I was missing on ComiXology.

Interesting thing about this issue – well, actually first, to back up.  In Gotham City Sirens Poison Ivy, Harley, and Catwoman have teamed up and they’re living together and they’re just trying to get back in the world.  It kinda straddles between Batman RIP and when Batman comes back.  But basically they’re just trying to get along and maybe not do so much criminal stuff as before and just have legitimate lives.

Now when we get to 20 we’re getting near the end of the whole thing.  We’ve had a bunch of arcs where we’ve dealt with each character.  We had one with a lot about Selina Kyle.  One that was a lot about Poison Ivy.  Now this one has mostly been about Harley.  When the last issue ended Harley was going back to Arkham Assylum to kill Joker.  And basically when this issue begins that’s where she is; she’s on her way to kill Joker.

I think that this issue really moves Harley forward a lot as a character.  In a way it’s kind of a shame that she got rebooted in a more grimy character with the New 52.  Nevertheless, this is a good evolution on her character.  She goes into Arkham Assylum and, basically you get to see a side of her that’s not so ditzy, not so crazy.  It reminds you, “Hey, she was a psychologist” she’s is an intelligent person.  She just kinda acts all crazy around Joker.

In particular she faces three different obstacles on her way in and she’s brought something along that will deal with each one. While she was at Arkham she made it her business to learn everyone’s secrets and now she’s able to use it to manipulate them as she goes into this issue.  One character, he likes marbles because as a kid that played a really key role in his life.  Another character likes flowers.  And the final character, well, it was Clayface, and it had to do with a crowbar.  The most interesting thing about these parts where they’re demonstrating how Harley knows all these things about these characters is that the artwork is beautiful.  In the marble page you have a series of marbles there that are showing what’s going.  For Clayface a big, important thing is the crowbar and you have this crowbar imagery there.  And I think it’s neat the way they’ve done that.  Really big props to the artist, Bach.

Basically, she’s – Harley’s – making her way to Joker.  And when you get to the end of the issue it’s just her and one security guard left between her and Joker.  And she says she wants to kill him.

Basically, what I’m curious to see is – what I already know, what we already know is – that when she finally reunites with Joker she ends up teaming up with him.  One of the first issues that I got when I was getting into Gotham City Sirens was her teaming up with Joker as they take over all of Arkham Assylum.  So what I’m really curious to see is what does he do to manipulate her again?  I mean, she’s the master manipulator.  She’s done it with all these people all the way through to get in.  Yet, somehow, he’s going to do it back to her; Joker’s going to do it back to her and, basically, complete the cycle.  Show that really, no matter how much she tries to grow she can’t get over him.  And that has been a pretty big, important arc through all of Gotham City Sirens.  There was a huge arc where they went back to the Silver Age and saw this old henchman of Joker’s and how he felt replaced by Harley so it will be very interesting to see what happens; how they get back together.

Definitely, if you haven’t read Gotham City Sirens, I would recommend getting all the trades or just buying them on ComiXology.