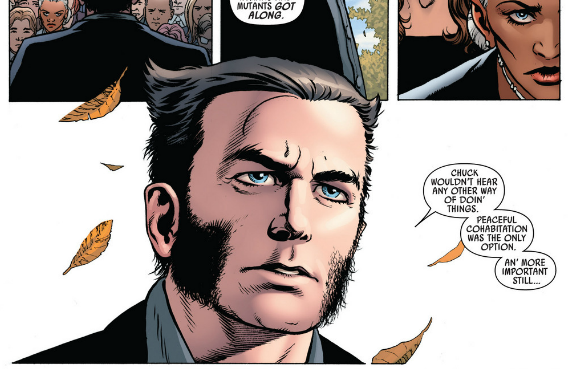 I decided to combine both Uncanny Avengers #1 and AvX: Consequences #1 because they both are dealing with the aftermath of Avengers vs X-Men.  These aftermath type books aren’t anything new for Marvel.  At the very least they did the same thing with Fear Itself.  After the main book they had Fear Itself:Consequences or some similar mini-series where they dealt with the aftermath.  And Uncanny Avengers, itself, kinda swings directly out of the events of Avengers vs X-Men.  It has a team of Avengers teaming up with a team of X-Men in order to show the world that they can all work together.

Uncanny Avengers is by Rick Remender and John Cassaday.  I love Rick Remender on Uncanny X-Force.  He does a really good job on the team dynamic.  He’s really made me care a lot about characters I didn’t care about before.  And John Cassaday has pretty good art overall.  AvX: Consequences by Kieron Gillen who’s been doing pretty much all of the X-Men related stuff for at least the last year or two, if not longer.  And Tom Raney who also does some very good art.

Both of these are dealing with the fact that mutants are returning to the status quo prior to M-Day.  So, basically, for about ten years (maybe a little bit closer to six years) the whole thing about X-Men has been that the Sentinels are gone, there are only 200 mutants left, and most countries don’t fear them anymore.  In fact, because of that they’re on the run – it’s kinda forced Scott Summers’ hand to be more direct against people because there are only 200 left and he has to protect them.  Now Marvel is saying, “OK, we’ve told all the stories we can tell with that kind of framework.  Now we’re going back to the X-Men and, mutants in general, feared because there are mutants everywhere.  And people are buying Sentinels and it’s basically going back to the way things were under the Claremont Days. 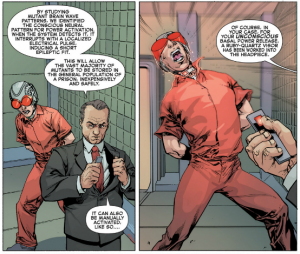 Now, in AvX: Consequences, Scott is in a regular jail, but they’ve put this device on him that gives him a shock any time he tries to use his mutant powers.  This is a new technology advancement on the whole Sentinel idea.  There’s a lot of work done by Kieron Gillen to say, “Hey, you’re not even worth going to any of the super hero prisons.  You’re just in a regular prison and you’ve got this device on you.”  And there’s a lot about him being humiliated by because of that.  And kind of making sure that even though he still did get a bit of a win, the fact there are more mutant births, he still did kill people.  And he’s still in jail and still deserves a little bit of humiliation.  The book kinda goes back and forth between a lot of stuff.  There’s an example of what happens in Wakanda now. There’s the scene with Scott.  There’s another scene with Hope where we get to see what Hope gets to do now.  She’s been the central focus of the X-Men since Second Coming.  Now she’s getting a free pass.  And the way it’s written she may disappear for a while from the comics.  But they could just be giving themselve the most flexibility possible.

Raney’s art style works really, really well with Wolverine.  There’s a scene where Wolverine is explaining how he feels because of what Scott did and how he feels that he really betrayed the trust that Charles put into him and Wolverine looks amazing.  The scene has the perfect tension.  Everything looks great.  His artwork doesn’t work so well on the scene with Hope, Wanda and Captain America.  Captain America ends up looking like a toy.  Things look really weird and the scene just looked really weird to me.

In Uncanny Avengers you have a little bit of a weird disconnect because Scott’s actually in a SHIELD facility;he’s in the SHIELD Brig.  And he’s got … Havok goes to visit him (who’s his brother) and it’s really weird because here he’s in this prison that serves his stature.  So I don’t know if it’s meant to have the fact that he’s moved from one prison to another and there’s just a timeline difference that isn’t 100% clear yet.  Or if there was a little miscommunication between the authors, but it was a little weird, especially since they both came out in the same week that there was that disconnect on where Scott Summers is being held.  It’s not the end of the world.  But, again, reading the universe as a whole and not just one book it kind of makes it a little weird.

Basically Rick Remender does a good job writing a scene where Havok and Scott discuss why Scott did what he did.  Whether it was right for him to become so Magneto-like and it’s interspersed with Wolverine delivering the Eulogy at Xavier’s funeral.  Which is great, it’s a great scene.  I really hope that Marvel decides to keep him dead, if not forever, at least for long enough that it matters.  That this whole eulogy and death will actually matter.  It’s actually just a huge joke now – death in comic books.

There’s a mutant terrorist that kind of precipitates things.  OK, the world is ready to be scared of mutants again.  Here’s this mutant terrorist doing stuff.  There’s a great scene with Rogue and Wanda that really puts a good end-cap on the mutants starting a new era.  Here’s Rogue letting Wanda – Wanda essentially sets the chain of events in motion that leads to – directly to – Avengers vs X-Men.  So she’s right to be pissed at her.  Then again, Wanda makes some good points as to why Rogue is over-reacting.  And we get our surprise ending of who the actual villain is.

Uncanny Avengers (in the video I accidentally say Uncanny X-Men) basically they’re forming this new team, but the impetus of this book is coming straight out of Avengers vs X-Men so Remender has to spend a lot of time kind of dealing with that, the consequences of that – the ending of Avengers vs X-Men and then tying that into this new book he wants to form, this new team he wants to form.  And, again, he does do a really good job on team books.  See Secret Avengers, see Uncanny X-Force.  But the book as a whole suffers from the fact that he has to issue number one to transition away from Avengers vs X-Men and into Marvel NOW! and it is Marvel’s flagship book.  So I think I have to give that one four out of five stars.  But there’s a lot of good potential.  It may not end up being for me because I’m not a big Avengers person, but it still has a lot of potential.