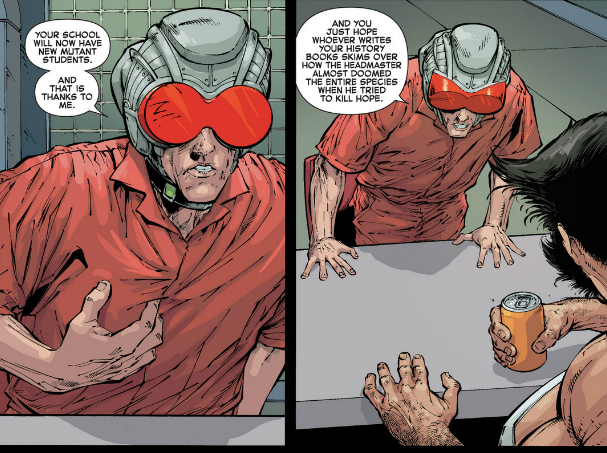 This time on Comic POW! I’d like to talk about AvX: Consequences #2. In this issue Kieron Gillen has really, really outdone himself. He’s taken a gamble, in the sense that the entire issue takes place in just one scene, basically. There’s a second scene that takes about two pages at the end, but for the most part the entire book is just scene. And you really don’t see that too often in the Big Two. You see that more often in the more experimental comics, the more indie comics. So it’s really neat to see someone take a chance and he really makes this into a character study. We’ve got Cyclops and we’ve got Wolverine and it picks up right where the last issue left off.

Let me just say, first of all, that if you like the X-Men – pick up this book! Whether or not you care about Avengers vs X-Men, whether or not you think these Consequences books are hokey – PICK THIS UP. And I’m just saying that upfront because I want to have a couple of spoilers here. So I just want to let you know up ahead that you should definitely get this book. If you don’t care about the X-Men, if you only care about Avengers or you’re not really into the X-Men at all like my brother, then just forget about it. Don’t worry about this book because you’ll be bored. It’s just Scott and Wolverine talking in jail.

Now, I assume that anyone that cared about spoilers is gone already. What’s so great about this is, basically, Kieron Gillen has really been taking a look at Scott for the past few years. Like I said in the last review, he’s been leading the X-Men books – he’s been the lead writer – even if he hasn’t been writing each and every book. This is kind of the big conclusion to his Scott Summers arc because I’m pretty sure he’s going to be moving on Thor and some other books. I think he’s pretty much off the X-Men once Marvel NOW! comes out.

So, basically, I think there’s two really key points in here that I really enjoy. One is when Scott mentions to Wolverine that now he knows what Jean felt like and that’s something that Wolverine will never know. And I like it for a couple reasons. One, he’s really antagonizing Wolverine given their huge history, the love triangle between the three of them. And, two, he’s really actually telling the truth. If you haven’t been possessed by the Phoenix Force you wouldn’t know what it’s like. In the same way that in Uncanny X-Men we’re exploring the fact that Magik purposely tricked Colossus into become cursed so he could know what she went through. We kinda have the same deal here. Being the Phoenix Force is such a colossal thing. Also analogous to this – in Spider-Island when Mary Jane got the spider powers and she finally knew what it was like for Peter.

The other scene that I really like a lot. Once again Scott, just as he’d been doing consistently since the end of Avengers vs X-Men is defiant. Because of him, there are new mutants and he’s right. Number one, he tells Wolverine that for siding with the Avengers he could have prevented the birth of new mutants. That’s a great thing for him to say. It’s true. Again, did the ends justify the means? Probably not, but it’s pretty neat that they’re really going on that path. And, second of all, he says the same way that Quentin Quire had the shirt “Magneto was Right” people are going to have the shirt “Cyclops was Right”. Yeah, he did a lot of bad stuff, but guess what? Because of him there are new mutants. And I really like that they’re pushing that angle.

The interesting thing is that for a little bit there it looks like Scott’s really coming off as a jerk. Why is he being such a jerk to Wolverine? Just because he feels that he won, but he’s still in jail? No, it turns out that he’s trying to goad Wolverine into killing him because he feels that he’s going to die in jail. And when this book ends it looks like Cyclops is right. To me, the neat thing is the fact that …. the reason this finally has drama for once is that with All-New X-Men and having the Scott Summers from the past come to the future it’s not like there won’t be a Scott Summers in the X-Men line. So I feel like Marvel actually might not be too scared to kill Cyclops. Plus it gives him the whole martyr thing. So I think for once there’s actually some real drama that a major character could die. And I think that’s really exciting. It brings a lot a drama to mainstream comics that’s often missing because we know that the heroes can’t lose. We know that if they die they’ll be back. Even Xavier, who everyone is pointing to as the biggest reason Scott is evil. Because he killed Charles. Charles died back when Hope first appeared and he was brought back by Exodus. So it’s not like Charles hasn’t been dead before, anyway.

So, I REALLY, REALLY like this book I thought it was something bold that Kieron did. I really like the way he wrote it. Also, Steve Kurth’s art was great. Way better than Raney’s. Again, as I said last time he had that great art with the Wolverine panel, but overall it kinda didn’t match what the book needed. And Steve Kurth does a perfect job with this book. The art is great! You really get a feel for Cyclops and the way he’s acting and his emotions and stuff just from the way he draws his arms moving; the way he draws what you can see of his face.

One last thing that’s kinda tangential to this book that I want to answer. In this book, he’s in a certain type of jail before he was in a different type of jail. That’s actually – and I had remarked it was inconsistent last week – it turns out that my possible reasoning was correct. This set of books AvX: Consequences takes place after the events of Uncanny Avengers #1 and Uncanny X-Men – the one that came out this week. They explain they’re going to be moving Cyclops to this new prison.

So, I can’t wait to see what happens. I give it five out of five stars for all the great work that Kieron Gillen did and all the great artwork.