Video Review – Avengers vs X-Men Round 5 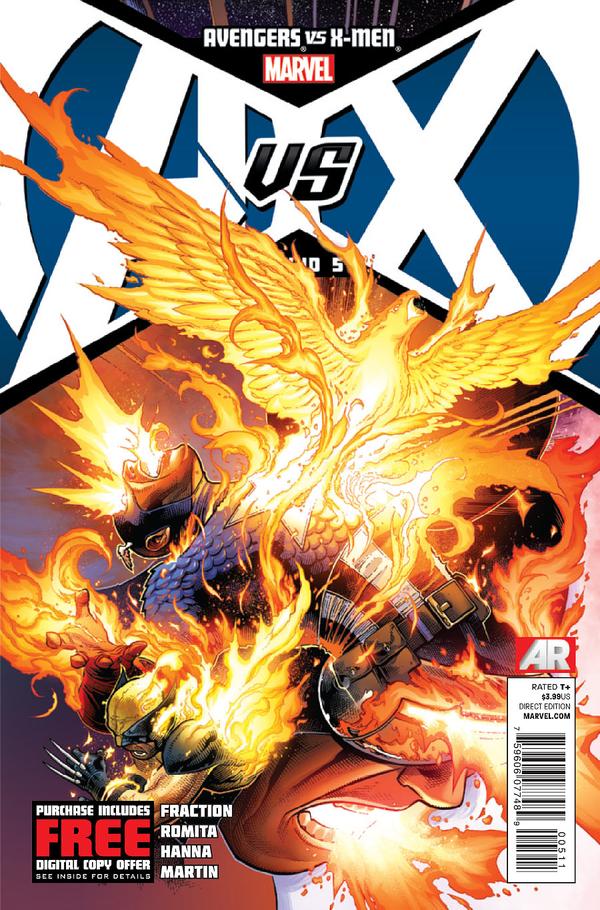 Another video review. This time I decided to try a different video format. Let me know your preference in the comments. Thanks!

Transcript for those with sight disabilities:

Welcome to the second episode of the Comic Pow video reviews. You might notice things look a little different. I thought I’d try out a different format for this review. Based on how it comes out, I’ll see which style I use going fowward.

This time around we’re discussing Avengers vs X-Men Round 5. This episode is spoiler-free unlike last time so feel free to watch it all the way through.

Alright, when the last issue left off, Hope had convinced Wolverine to take her to the Blue Area of the Moon, an area where you can breathe without a spacesuit. Unbeknownst to Hope, Wolverine had notified the Avengers. Thanks to telepathy, the X-Men found out and teleported there. As they wait for the Phoenix to arrive, they start to fight.

Up until now I hadn’t really been enjoying Avengers vs X-Men. The first four issues and most of the tie-ins have just been a global game of hide and go seek mixed with hyper-violent tag as Hope ran away from both groups who fought anywhere they met on Earth. So when this issue just picked up with the fighting again, I was considering not reading any more of this stupid story. I probably would have given up sooner if it hadn’t involved The Phoenix – the biggest deal in the X-Men coner of the Marvel universe. Basically, with very few exceptions, it always populates a powerful telepath and then causes them to kill all their friends. (And eventually entire worlds and galaxies). The Phoenix Force wants to posess Hope, the first mutant born since M-Day when Scarlett Witch removed the powers of nearly all the mutants. So Cyclops thinks that Hope is the Mutant Messiah and wants to let Hope get the Phoenix’s powers in hopes of restoring the mutants’ powers. The Avengers, on the other hand, don’t want to
chance the Earth being destroyed.

When Hope nearly kills everyone around her just by yelling “STOP”, she finally realizes that everyone hasn’t been telling her to watch out for the Phoenix because the grownups wanted to keep her from having fun. So she asks Logan to kill her. That prompts Cyclops and Wolverine to end up in a replay of Schism while Tony Stark builds a magical Tranformer to attack the Phoenix.

And what happens next….well, let’s just say it actually restored my faith in this event. Comics often promise twist endings, but this issue actually delivers. I was even prepared for a certain twist and it wasn’t that one at all. I’d say that if you were starting to give up on Avengers vs X-Men based on the previous issues, read this one. If you still aren’t on board, then nothing they do will satisfy you.