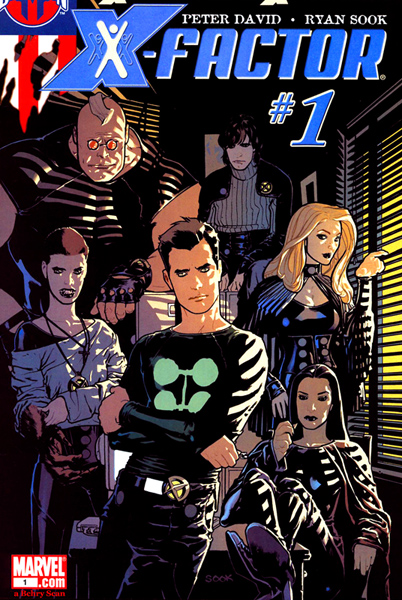 Individual titles are interesting. They let you get a sense for what a character thinks of him or herself, and they show you what that person’s thoughts and actions are like when they’re interacting with a few other heroes, but for the most part, they’re about solo crime-fighting activities or what the character does with their family or friends. Take the current run of Hawkeye, for instance: it alternates between Clint and Kate (and occasionally Pizza Dog) taking on their own enemies, but it also has Clint dealing with relationship issues and his brother showing up, and Kate leaving home and moving across the country. The book focuses on who they are as people, as it rightly should – it’s a book about them, after all.

Team books are different. Where individual titles give you a sense of who the characters are as people, a team book gives you a sense of who they are as heroes. Batman on his own is different than he is while he’s part of the Justice League. Iron Man’s behavior in his solo title is different from how he behaves in a group dynamic. Team stories show what I feel are more honest interactions – ones where the heroes aren’t hiding their skills behind civilian identities or lying about who they are. Even in the case of heroes whose civilian identities aren’t known to their teammates, the hero in question – let’s just call him Batman, for sake of discussion – is still more able to be honest with his colleagues as Batman than he is in his day-to-day life as Bruce Wayne, head of Wayne Enterprises.

Another reason that I love team books is because they deal with a topic that I enjoy a lot: found family. It’s the sense that you have a team made up of very different people with very disparate backgrounds and talents and personalities, but over time, they grow to care about each other really deeply. A lot of the time, it’s people who don’t have traditional families, or who aren’t especially close to those families for whatever reason. The team, therefore, becomes a sort of surrogate family. They form strong emotional bonds and come to rely upon each other not only in battle, but for their day-to-day needs as well. I really enjoy reading found family stories, so team books appeal to me on that level.

Take, for example, X-Factor. This is a book that has had several volumes and tie-ins, and is perhaps most famous for pairing up Julio Richter and Shatterstar, one of the most well known gay couples in comics. The roster has undergone a lot of changes since the book was first launched in 1986, and the focus of the team itself has shuffled around – it’s been a team of former X-Men, a government organization, and a detective agency. Through all of that, though, that sense of found family has remained – and has been proven time and time again.

I’m most familiar with volume 3 of X-Factor. It was published from 2005-2013, and features the Multiple Man, Jamie Madrox, as its focal character. Jamie, obsessed with noir films and the idea of detectives, opens up a detective agency in “Mutant Town” in New York City. This is shortly after M-Day and the Decimation, so most of the people who were born mutants are now de-powered. X-Factor Investigations will help anyone who crosses their doorstep, but they really specialize in cases involving current or former mutants. In fact, all of their members belong to that category, which lends them a lot of credibility in the mutant community.

The team starts with Madrox and two of his close friends, Strong Guy and Wolfsbane, but it quickly grows to include Siryn, Monet, Layla Miller, and a powerless Rictor. As the volume continues, new members come and go somewhat consistently, but writer Peter David does a good job of making it seem natural. They all come to the team with their own back stories and their own baggage, butt they manage to work through it to become the kind of found family that I love to read. Not all of the stories end well – each of the characters goes through some sort of emotional trauma at some point, and a lot of them are really painful – but no matter what happens, X-Factor comes through it. They’re there for each other, even when it hurts and even when, by all rights, they should probably let it go, and that’s what drew me to the book.

That’s part of why the recent re-launch of the book bothers me. Peter David is still at the helm of the book, but instead of the team we know and love – and have watched grow into this great found family – we’re given a book with the same name and a completely different cast of characters. Instead of Madrox and his team of detectives, we have Polaris leading a corporate-sponsored superhero team. Sure, Polaris was a member of one of the earlier incarnations of X-Factor, so there’s some legitimacy to having her there now – but having the series end in September and then re-launching the book four short months later without any of the characters or setup that we just had seems like more of a corporate move on Marvel’s part than a good move forward for the X-Factor name.

This is where corporate responsibility comes in. I’ve talked about this issue with regards to Marvel before – most recently, over the summer in relation to the Age of Ultron event – but here it is rearing its head again. When X-Factor ended in September, fans were left without the book that they’ve loved for years. Naturally, anyone who loved the volume that just ended would be excited to see it returning; since it was only gone a few months, most of the fanbase would probably still be on the lookout for something to fill that spot in their pull list. Using the same name as the previous book would instantly draw those fans in, and boom, instant sales for a new book… that bears no resemblance to the one that just ended, even though they share a name. The new book so far has none of the characters that we’re expecting, and instead of being a detective setup like the last book was, it’s now a team of pet mutant superheroes doing the bidding of a company called Serval Industries. The last incarnation of the team is explained away in a few confusing sentences, and we’re left with Polaris, Quicksilver, and Gambit at the beck and call of a company that we haven’t heard of until very recently.

It feels like a bait-and-switch, a trick to sell the book on something other than its own merits. While I understand that getting readers for a new book is a difficult task, and that failing to do so could mean the cancellation of a book before it has the chance to establish itself, this kind of tactic turns me off of future issues of the book immediately, where I might have been more open to the idea if I hadn’t gone in expecting something that at least resembled the X-Factor, the team and the family, that I know and love.

There is every chance that All New X-Factor will grow into something amazing. Peter David is generally a good writer, and he’s shown that he has a knack for writing characters and stories that people love to read. The sad thing is that at this point, I’m not even considering going forward with the new series, because I feel like I’ve been duped. Better luck next time, I suppose.

X-Factor: The Longest Night. Written by Peter David; art by Ryan Sook and Dannis Calero. Published 2007; collects X-Factor Volume 3 #1-6. Find it on Amazon or buy it from comixology.