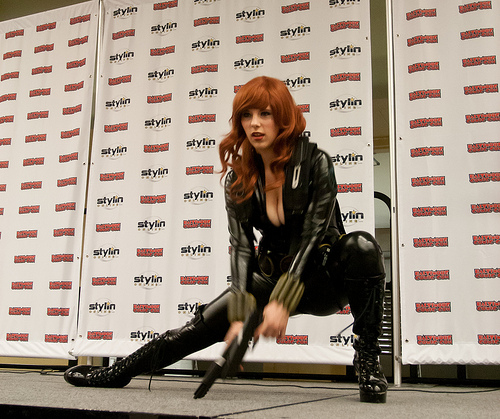 Unfortunately, I won’t be able to go to Baltimore Comic-Con this year because of family commitments, but I had a blast last year and I recommend going if you’re in the area. It’s 7-8 Sept this year. But if my endorsement isn’t enough, check out the info they have sent me about this year’s Comic-Con:

Neal and Josh Adams will be there. Neal Adams is best known for his Silver Age work on X-Men, The Avengers, Detective Comics, and Green Arrow. Josh Adams is the artist for IDW’s Doctor Who although he has also done work for both DC and Marvel.

Also representing IDW will be Joe Hill, creator of Locke and Key (which has been optioned by Universal Studios) as well as Kodiak, The Cape, The Cape: 1969, Wraith: Welcome to Christmasland, and Thumbprint. But we know him in our corner of the world as the creator of such comics as his iconoclastic Jesus series, Feelgood Funnies, Amazon, and Dorman’s Doggie, and contributions to underground anthologies like Rip Off Comix and Snarf. Frank collaborated with the late Harvey Pekar on American Splendor and the graphic novel My Cancer Year.

Denis Kitchen, who wrote Mom’s Homemade Comics in 1969, also did the amazing task of founding the Comic Book Legal Defense Fund. Among other things, the CBLDF works on a cause near and dear to my heart – censorship. They fight for comics’ right to be like any other work of art – protect free speech. He also worked with some pretty famous creators:

Mark Bagley’s also going to be at the show. He’s quite famous for his very long runs on books (which I love – artist consistency is too often ignored in this visual medium) such as 25 issues of New Warriors, 64 issues on Amazing Spider-Man, 50 issues on Thunderbolts, and 111 consecutive issues on Ultimate Spider-Man (breaking Stan Lee and Jack Kirby’s 103 issue run).

What else can you expect? Well, the show’s big enough to attract people like Peter J. Tomasi (although I’m not sure if he, specifically will be there this year) but it’s small enough (compared to San Diego and New York) that it’s comics-focused and you will be able to meet your favorite creators. (And perhaps even get commissions) And don’t forget the incredible cosplay to see: As well as the possibility to participate in the costume contest! So hopefully that helps convince you that you should definitely check out Baltimore Comic-Con. I had so much fun last year that I really, really hope I’ll be able to attend next year and bring you awesome interviews and coverage.