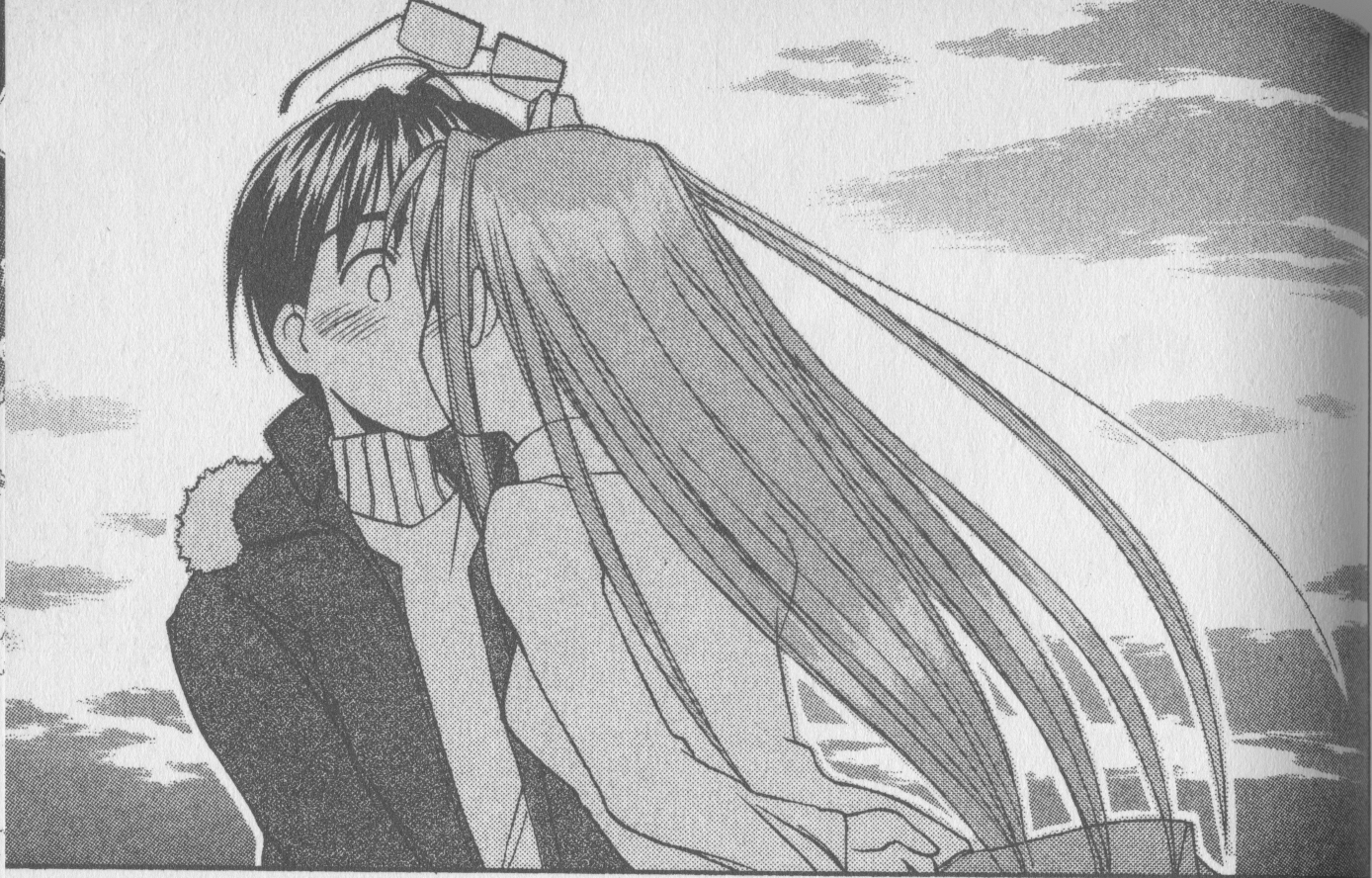 The story picks up exactly where the last one left off – with Naru explaining to Mutsumi and Keitaro that they made their Tokyo University promise to each other. The three of them go on a walk and Naru tell Keitaro he needs to decide whether he wants to be with Mutsumi or Naru by the time they get home. He’s unable to decide and that stinks for him because Akamatsu ups the ante by having Mutsumi’s apartment burn to the ground on New Year’s Day. The Hinata House crew are unable to rid her of her bad luck via various New Year’s Day rituals so she moves into Haruka’s house outside the Hinata House. Exam Test Center Day rolls aroudn again and Keitaro does badly on Day One or so he thinks. He spends the day being mopey and Naru tries to cheer him up. When she finally makes him do the self evaluation it turns out he did better than Naru.

This volume marks a turning point and key character growth moment for Keitaro (although his actions at the end of this volume & beginning of the next are a bit of a regression as he falls into an old pattern). Keitaro has spent two years seriously studying for the exam with Naru and his test center score (and doing better than Naru) actually make him want to truly focus. I’ll comment a bit more about some of the humor Akamatsu has with this new, less unlucky Keitaro in the Gender section. However, even though Keitaro’s good and bad luck fluctuates as the plot requires, we’ve finally seen him decide to take things seriously. He’s putting his all into getting in – perhaps renewed by the fact that he now knows who he promised in all those year ago. The Ronin Trio have a pact to get in and he’s determined to make it in.

Mutsumi asks Keitaro on a date. While he mostly remains firm in his devotion to Naru, I see this as remaining in character since Naru has been so tsundere about the situation ever since she decided she was starting to like him. Naru and Kaolla spy on the date and hijinks ensue. As time continues to pass for our heroes, we come to our second Chocolate Day. Mutsumi’s chocolate is the prettiest and everyone else has a a reference to what happened in the previous year – including Shinobu actually having the courage to give Keitaro his chocolate when everyone else is doing it.  The trend of Naru having horrendous looking, but delicious food continues with her chocolate and Keitaro declares it to be the best.

In a chapter that’s hilarious for everyone’s lack of understanding of biology as well as willingness to interpret everything Mutsumi says in the dirtiest way possible, Mutsumi goes to sleep with Naru while her room at Haruka’s is painted. Mutsumi gets up in the middle of the night to pee and falls through the hole into Keitaro’s room. Her clothes get caught as she falls and she ends up naked in Keitaro’s bed. Everyone assumes they slept together and Keitaro is in for a world of hurt until Haruka notes that Mutsumi is always getting into trouble walking around in the middle of the night.

In the page above we see Naru kiss Keitaro for only the second time (on her own, not because someone was knocked into someone else). After letting us think that the childhood promises were resolved and that Keitaro only needed to decide between his promised, Mutsumi, and his current love, Naru, Akamatsu drops another twist on us. Mutsumi reveals that Keitaro did not make the promise with her. Additionally, Mutsumi made her promise to get in with a girl. Considering that we learned in the previous book that Mutsumi is smart – she just faints a lot – we’re left wondering if she’s purposely being flirty with Keitaro and whether she’s trying to get Naru to realize that she likes Keitaro or being a little mean or truly likes Keitaro. For example, during their sleepover Mutsusmi promises Naru not to pursue Keitaro until after the exams. When Naru catches the end of the sentence Mutsumi changes the subject. In the final plot twist of Ken Akamatsu’s plot twist magnum opus, it turns out that Keitaro DID indeed make the promise with Naru despite her protests that she would have been too young. So, at the very least, that bit of moral impediment is gone. Keitaro can pursue Naru without worrying about breaking his imagined promise to Mutsumi.  Unfortunately, he falls asleep, daydreaming, during the exam. It appears he’s failed and he is nowhere to be found at the end of the book.

The new cultural observances I noticed in this book revolve around Mutsumi and her New Year’s Day. She’s sad she lost all her melons in the fire, continuing her obsession with melons. The Hinata House try to help her rid herself of her bad luck on New Year’s Day. It’s interesting that both the Japanese and the Chinese believe the first day of the year to be related to luck. Most people of any culture at least pay lip service to luck (knock on wood, for example), but if we had any days associated with luck in Western culture, it doesn’t seem to have survived to the modern times to nearly the same degree. The closest I can think of is that some Western cultures eat twelve grapes on the New Year for good luck. But the Japanese, as we see here, take to the temples to make specific requests (such as getting into a university). It’s interesting that Mutsumi is said to have a goddess watching over her. On the one hand, it’s just a grand joke on Akamatsu’s part. If she’s this unlucky with a goddess – imagine how she’d fare without one. I wonder how many Japanese people believe in something like this and I wonder how it compares to the Western idea of a guardian angel. It appears to share some characteristics, but I wonder how subtle the differences are.

It’s interesting that arrogance is listed as a manly trait. Surely women are just as capable of being arrogant.(Love on ice chapter)

We get a huge set of male and female gender commentary when Keitaro starts studying so hard that he stops noticing the girls around him. First up, the end of his clumsiness is quite attractive to the other girls. This isn’t strictly Japanese, I don’t know of any culture that tolerates manly men being clumsy. Actually, clumsiness is not feminine either – it’s a negative to both genders although women have more of an ability to play it off as cute or as a way for a man to be chivalrous. (At least in both my personal experience and what I see in cinema)

After a while Naru starts getting annoyed that Keitaro is ignoring her and when she doesn’t get attention despite trying to, she examines herself and whether she’s no longer pretty. This is, of course, a landmine of a topic to write about – especially as a man. The way I see it is that, despite the fact that we ideally don’t want women defined by their looks, that’s just the way reality is. And I think what Akamatsu is trying to do here (other than the comedy that comes from her hypocrisy – she’s ready to be angry at him when she thinks he notices) is show that when women are constantly being subjected to being viewed sexually by men (we learn later of Naru’s time in middle and high school, but even at this point in the story we know she was purposely dressing ugly to keep guy from trying to get with her while she studies for the exams), the sudden drop in attention seems horrible and as if they’ve done something wrong. I think a lot of the strange behavior we see among older women in Hollywood stems from this phenomenon.

When Motoko falls for Keitaro we also learn that men should be serious and dedicated. Given what I know about Japan’s businessman culture, I’m not surprised these would be cherished male traits.

Yet another erection joke. As we’ve noted before, Love Hina does not shy away from those.

Join us again next time as we continue our trek through Love Hina.