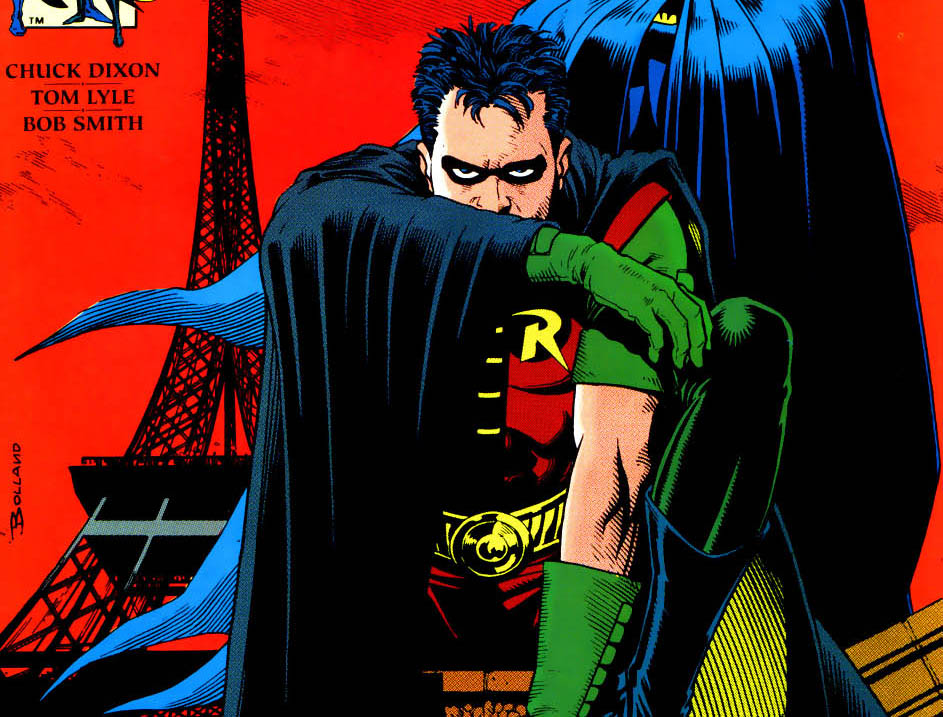 It’s really interesting to think about how quickly the world changes around us. Whether we’re talking about popular culture, politics, or technology, things are constantly moving. The media produced during any given time period tends to reflect this; things produced today have up-to-date smartphones, fashion, and cars, and current sentiments are reflected in the story lines. This isn’t a new phenomenon, so when we look at media produced twenty years ago, we get a snapshot of those same things from that time period. Comics are especially good at this, because they’re consistently released on a monthly basis. They evolve as they continue, showing us a constant stream of snapshots.

I recently found a copy of Robin: A Hero Reborn at a used bookstore and picked it up, figuring that reading about the very beginning of Tim Drake’s run as Robin would make for a fun afternoon. The story is an excellent read, and though I was expecting it to be a little dated – it was released in 1991 – I was surprised at just how much you can glean about the time period from reading just eight issues.

The Batman side of the story focuses on Tim actually earning the title of Robin. The case in the story involves a string of murders committed by random people throughout Gotham, none of whom are connected by more than the mask they wear to commit the crime. Bruce puts off the investigation to attend the funeral of Janet Drake, Tim’s recently deceased mother, and we get a nice scene of everyone supporting Tim in his time of need. After the funeral, Batman heads out to investigate, ordering an emotionally compromised Tim to stay behind.

Tim doesn’t love the idea, but he decides that if he stays in the Batcave and figures out the mastermind from there, Bruce will see that he can really be Robin. We then get a montage of Tim the Tiny Detective interspersed with Batman going into a trap and pretty much getting the crap kicked out of him by Scarecrow, who planned the murders for shaky story reasons. Tim disobeys the order to stay in the Cave and rescues Bruce, knowing as he leaves that his disobedience means that Bruce will never let him be Robin. He saves Bruce, a hostage, and the day in general, and Bruce admits that every once in a while, the heroes get to break the rules in order to do the right thing.

The Robin miniseries follows Tim as he travels to Europe to train with a world-renowned martial artist. He spends some time with the trainer before predictably finding trouble that no Robin could ever ignore. He ends up making himself known to the Ghost Dragons, a gang with ties to King Snake, a somewhat major villain. Tim leaves his training and joins rogue DEA agent Clyde Rawlins and recurring Batman mostly-enemy Lady Shiva as they track King Snake and the Ghost Dragons all over Eurasia. Tim ends up learning a lot of martial arts from Shiva, including how to use a bo staff, which is still his weapon of choice today. The series ends with Tim foiling King Snake’s plans, thereby making an enemy of the Ghost Dragons for life.

The first thing that reminded me that I was reading an older comic is probably the most obvious: the art is very dated. Comic book art has always had a very distinctive style, but that style has evolved over the years. The art from the early 90s isn’t much more detailed than art from a decade before that, and it still uses the typical four-color printing that was common throughout most of comics’ history. The process leads to a lot of art that, while good for the purposes of the story, isn’t quite up to what we’re used to today.

You can also see in the panel above that the lettering is blocky and a little unclear. It varies wildly from page to page, which is something else that’s indicative of the time – lettering tends to be more consistent in current comics, and I haven’t seen anything published in the last decade or so that was so fuzzy and garbled that I had to put concerted effort into figuring out what it said.

One of the biggest initial changes from Jason Todd’s Robin to Tim’s is the costume. Jason pretty much got shoved into Dick’s old costume, but when Tim puts on his costume for the first time, it’s drastically different. It’s a reaction to the way Jason died, yes, but it’s also a reflection of the times; people were starting to talk about kid sidekicks in gritty books, and Robin’s complete lack of protection – and a costume that looked like a target than anything else – were major offenders. The original Robin costume featured a bright yellow cape, shoes that were essentially booties, and a sincere lack of anything that could be called pants. The new costume, while clearly a nod to the original model, offers a lot more protection.

The fashion choices outside of the costuming are also telling. Tim’s casual attire places him firmly in the early 90s:

Shen Chi, one of the trainers that Tim ditched for Shiva, has a fairly impressive mullet, a leather jacket, and a popped collar:

Lady Shiva rocks a pantsuit/trench coat combo in a color that I can’t name:

The most fascinating thing that I noticed, though, was the technology. I’m always a little fuzzy on the details of the history of personal computing; for whatever reason, I always think that developments are much more recent than they actually are. Personal computers were first sold in the mid-1970s, and by the early 80s, the first laptops became available. I remember having a laptop similar to Tim’s in the late 90s, but here he is in 1991 with a laptop that has a color screen and everything:

Sure, it’s bulky and boxy compared to today’s machines, but that was cutting-edge technology when this book came out. Given how the tech in Batman titles tends to work, that might even be ahead of the curve for the time.

I also tend to think that the Internet in much newer than it is. Its popularity has really grown in leaps and bounds in the past fifteen to twenty years, but it’s been around in academic circles since the mid-80s, and began to be available in other settings in the very early 90s. We get a reminder of this in the first issue of the miniseries, when Tim is talking about his skills:

Overall, Robin: A Hero Reborn is an interesting trip back in time. It’s easy to see some of the influence that the time period had on the book, and it’s interesting to look back now and see what 1991 had to offer. It does beg the question, though: in twenty years, what will we point to in today’s comics? What will be dated then? What’s going to make us laugh?

All I can say is, I hope it’s not the return of the mullet.

Robin: A Hero Reborn. Written by Alan Grant and Chuck Dixon; art by Norm Breyfogle and Tom Lyle. Published 1991; collects Batman #455-457 and the original Robin mini-series (#1-5). Find it on Amazon.