In this volume the narrative really picks up again after being somewhat meandering in the last one. The gang’s back from the beach and Keitaro’s best friends offer him tickets to the Neverland themepark and we see the return of the joke of Keitaro not knowing his best friends’ names. His friends appear to be gifting him two tickets, but they actually charge him for the tickets. Naru and Keitaro get the results from their mock exams and it turns out that Keitaro has a B and a 60% chance of getting into Tokyo University. So it appears that Akamatsu might be sparing Keitaro from being a ronin for yet another year. Keitaro finally gets up the courage to ask Naru out on a date to Neverland, but the rest of the house ends up inviting themselves with Keitaro picking up the bill. So Keitaro asks Naru on a movie date and actually gets a yes. 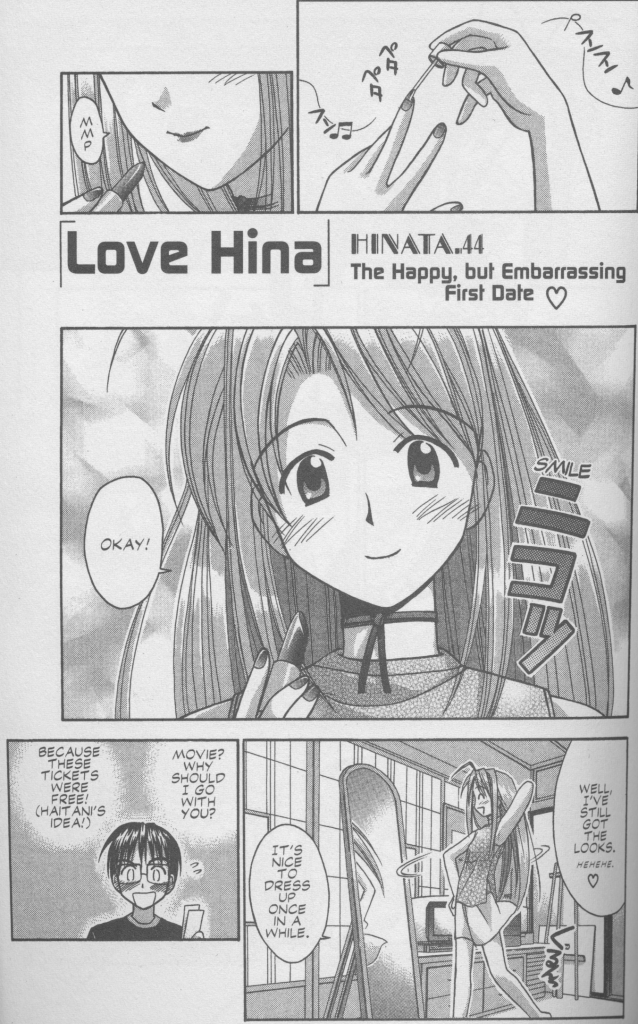 Love Hina Book 6 – Getting Dressed Up for a Date

While there have been hints for a little while now that Naru may be developing affections for Keitaro, it becomes clear in this book that she has ended up finding herself attracted to him. She actually dresses up for him and after the movie the continue their date at the aquarium. Just to drive the point home, as Naru is asking Keitaro if he’s still trying to get into Tokyo University because of his promise to a mystery girl, Mutsumi arrives and Naru gets jealous at how well Keitaro and Mutsumi get along. There was some of this on the trip where they first met Mutsumi, but Naru seems a bit more affronted now that she has grown to like Keitaro more.

The story then pivots as we learn more about Mutsumi. As she studies with the other two ronins they discover that she’s quite smart, she just happens to faint and have other accidents happen that keep her from passing her exams. There’s a bit of foreshadowing of the twist to come when Mutsumi seems to know where all the improbably shortcuts within the Hinata House are. There’s also an interesting scene where Mutsumi tells Naru that Keitaro is her type of guy. It’s a concept I will explore a little more in a future post, but the seeds are being sown to leave some doubt in the reader’s mind as to whether Mutsumi is being clueless or trolling Naru. 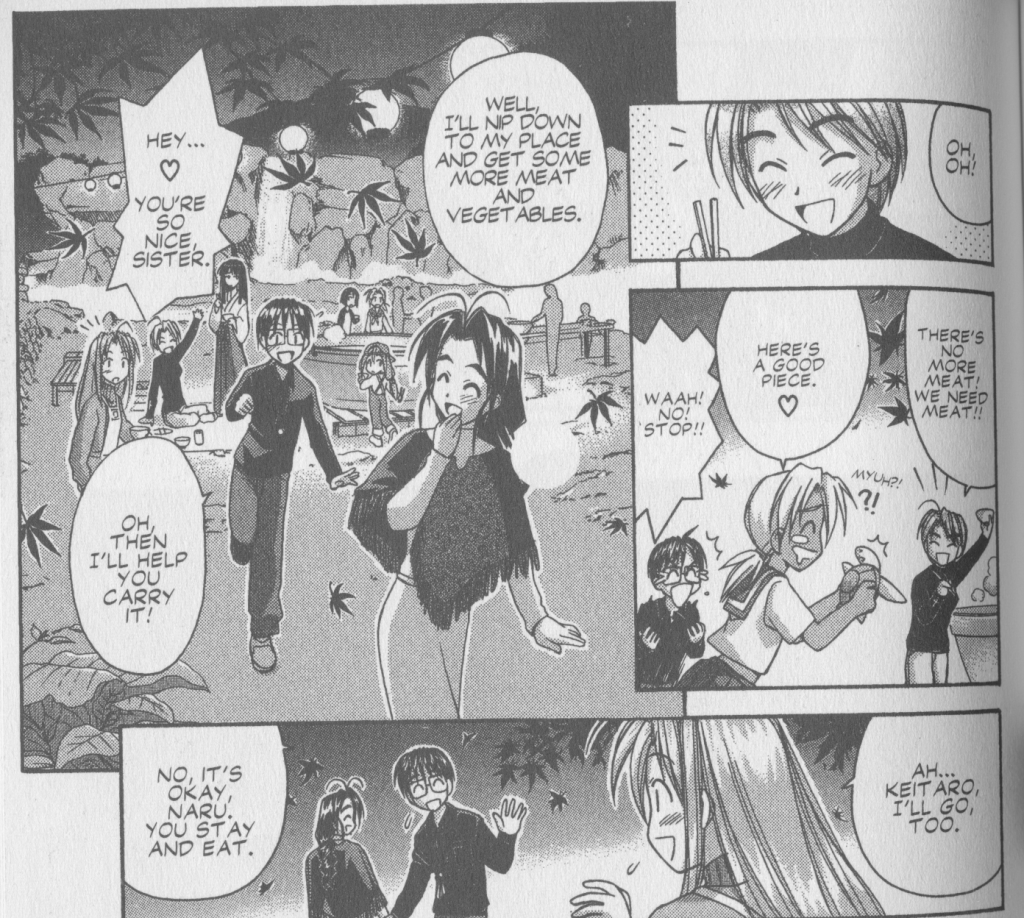 The Hinata House has a big potato cooking feast and when Mutsumi and Keitaro go off to get more food to add to the pot and don’t include Naru she starts getting jealous. Of course, Naru sees Keitaro and Mutsumi in a compromising position and gets pissed. Keitaro tries to fix it by telling Naru he’s trying to get into Tokyo U to be with her.

But the true twist of this volume is when Mutsumi tells Naru a story about promising a kid to get into Tokyo University that sounds nearly the same as Keitaro’s story. Haruka confirms that Mutsumi was there at the same time that as little Keitaro. Naru is distraught because, after all, she believes in the idea of promising someone to get into Tokyo University. Her first attempt was, after all, to get in because of a promise to Seta. 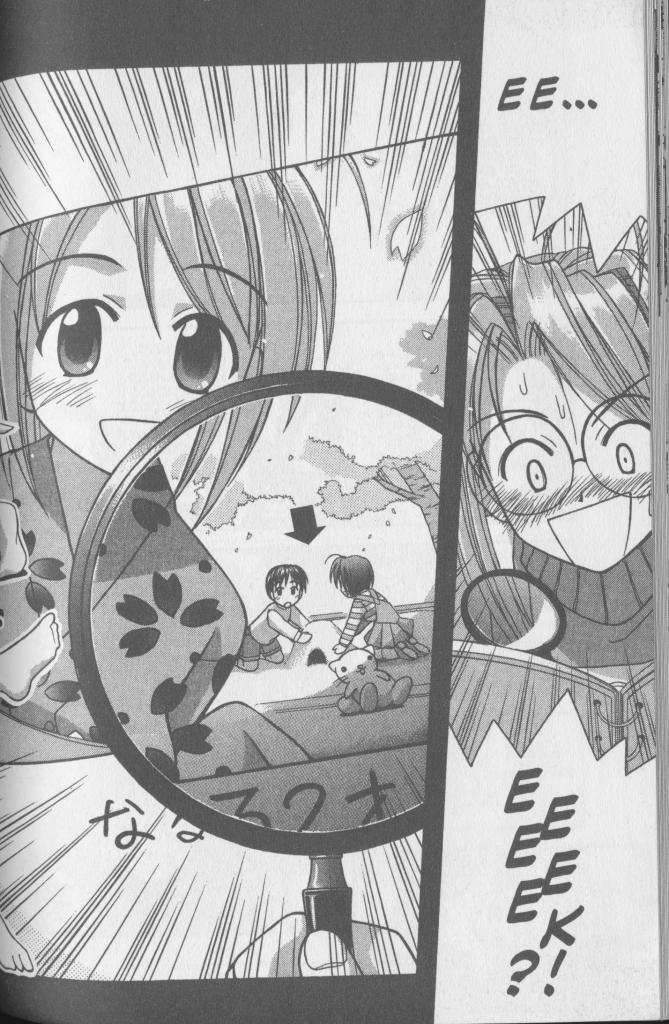 But Akamatsu has one more trick up his sleeve as Naru comes across a photo of herself as a toddler. It confirms that Mutsumi and Keitaro were the ones at the sandbox who made the promise to get into Tokyo University together. But the best part is that Naru WAS there at Hinata House (despite telling Keitaro she was never there and would have been too young when he thought perhaps it was Naru he had made the promise to) Naru decides to try and get Keitaro and Mutsumi together despite her own feelings. 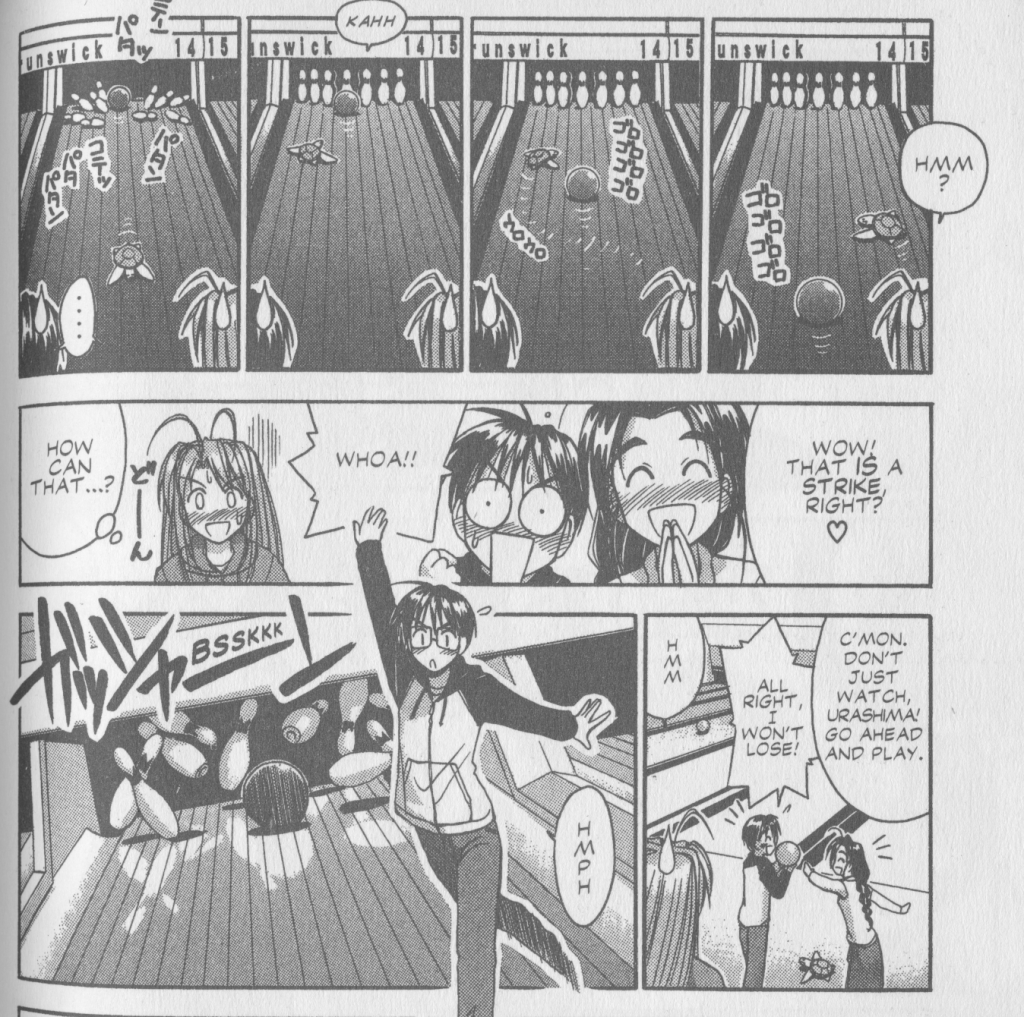 So it turns out that they have bowling in Japan. Or rather, Ken Akamatsu seems to think it’s something Japanese teens might do for fun. Of course, with globalization there’s no reason for the Japanese NOT to have bowling, it just seems like such a quintessential American activity from Fred Flintstone’s legendary bowling moves to the fact that it’s usually an easy way for teens in America to kill a few hours – especially when they can’t drive.

In this volume we also learn that Shinobu goes to an all-girls school. I can’t remember if I’ve come across a segregated school in my manga or anime experience. I wonder if the Japanese have segregated schools for the same reasons as the West – a belief in removing hormones and attraction from the learning equation or if there is an Eastern reason for it. 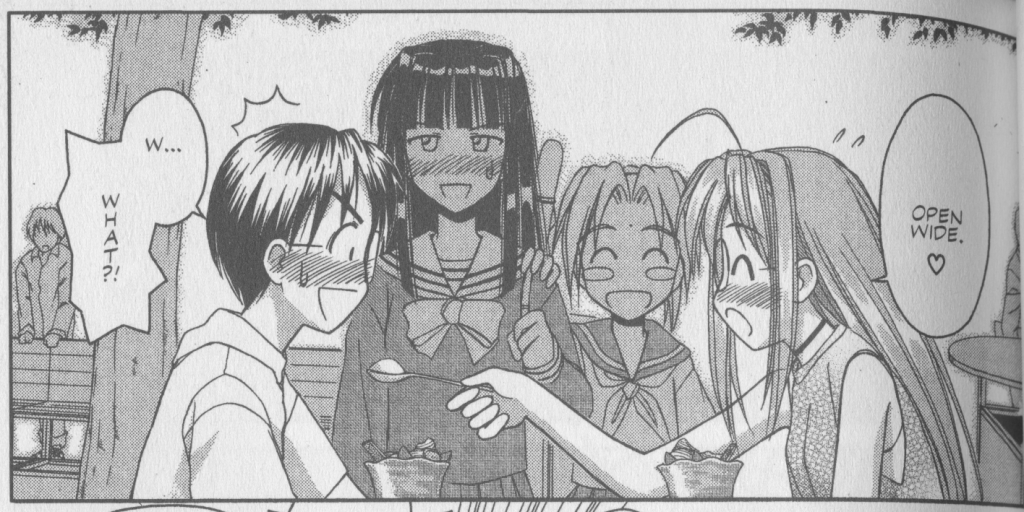 Keitaro and Naru go eat ice cream on their first date. Many other manga/anime have mentioned that ice cream is considered feminine in Japan (and, in my experience, in Asia in general) and one of the few acceptable ways for men to eat ice cream in public is as part of a date. It’s interesting they didn’t mention this, but given that Love Hina is a slice of life comic (well….for a pretty exaggerated world’s slice of life), perhaps this is just assumed knowledge. 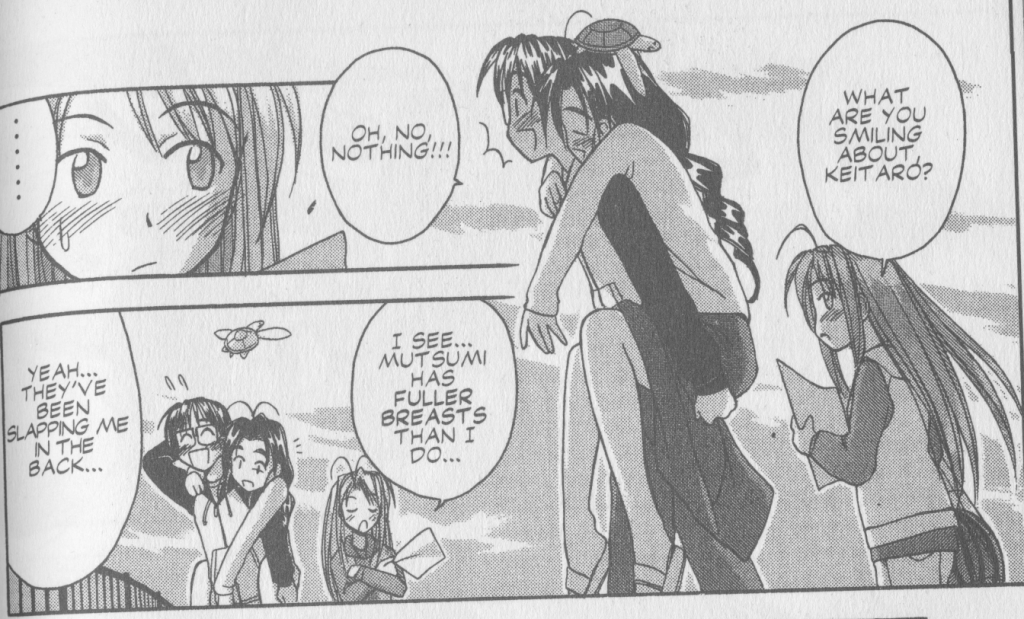 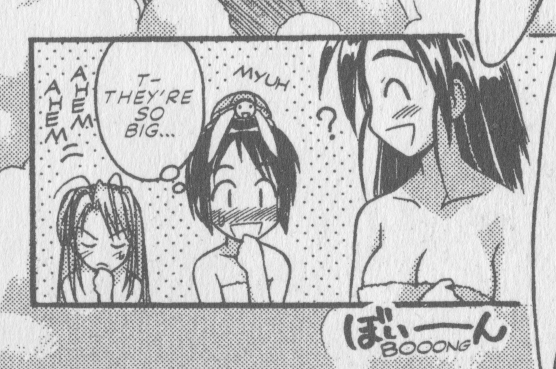 Manga/Anime seems to be obsessed with drawing attention breast sizes in a way that you just don’t see in American comics. Sure, American comics – especially super hero comics – often have women drawn with gigantic breasts, but you don’t really ever see anyone drawing any attention to it. In addition to Love Hina, here are some other anime/manga that have dealt with this:

It’s definitely a very different approach and one that might be alienating to some American women getting into anime. 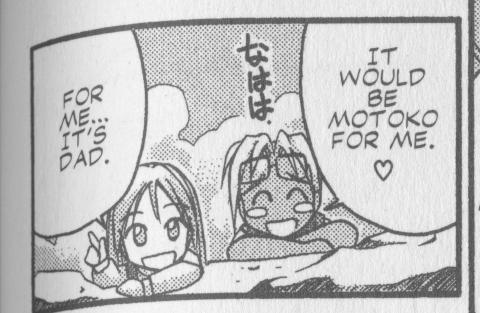 I was left wondering if Akamatsu meant something by this because of how weird Kaolla Su is. It was a little unclear whether Kaolla is meant to be bi or lesbian or just that whacky foreigner. And, while the youtube clip above reveals that Azumanga Daioh was not afraid to have a lesbian (or at least bi) character, Love Hina doesn’t seem to really want to take the subject seriously. (And I don’t mean that pejoratively, I just mean that it isn’t explored other than this throwaway line) 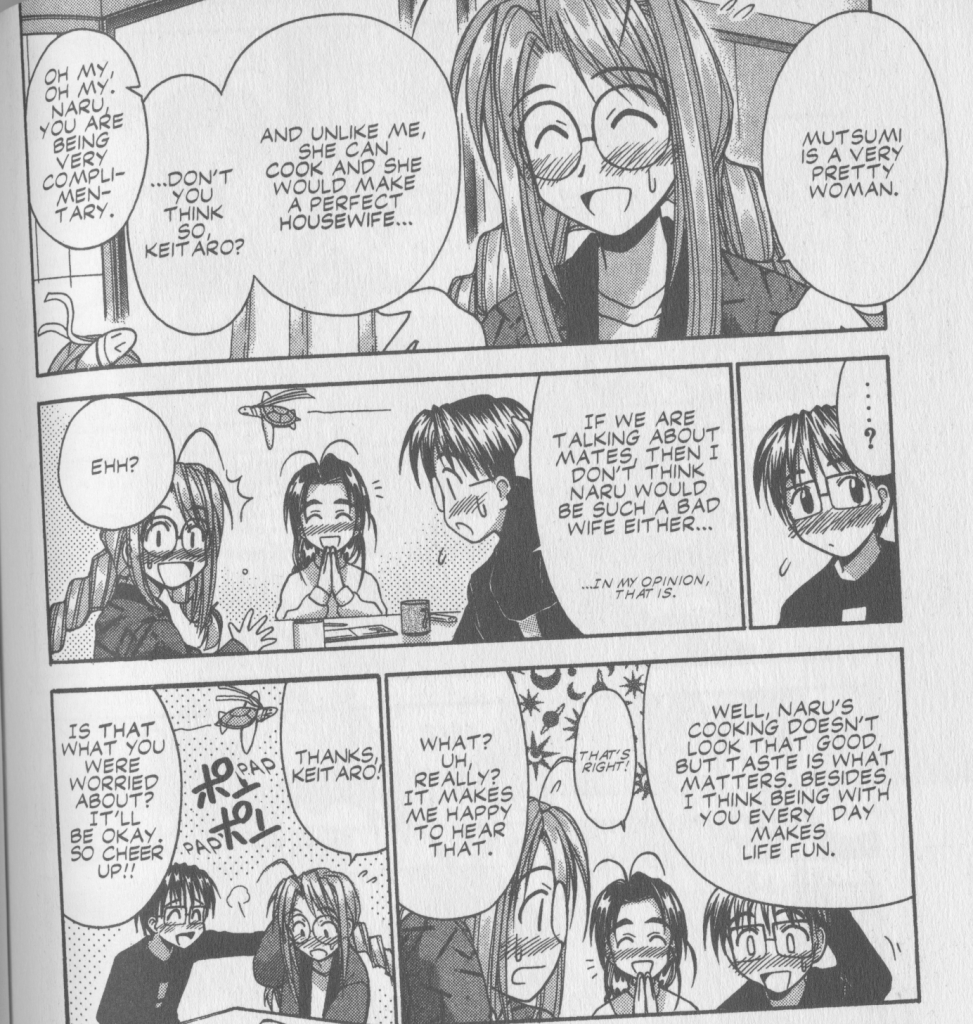 We’ve had this come up before, but this series of panels illustrates once again that Japanese women should not only make tasty food, but it should also look presentable. 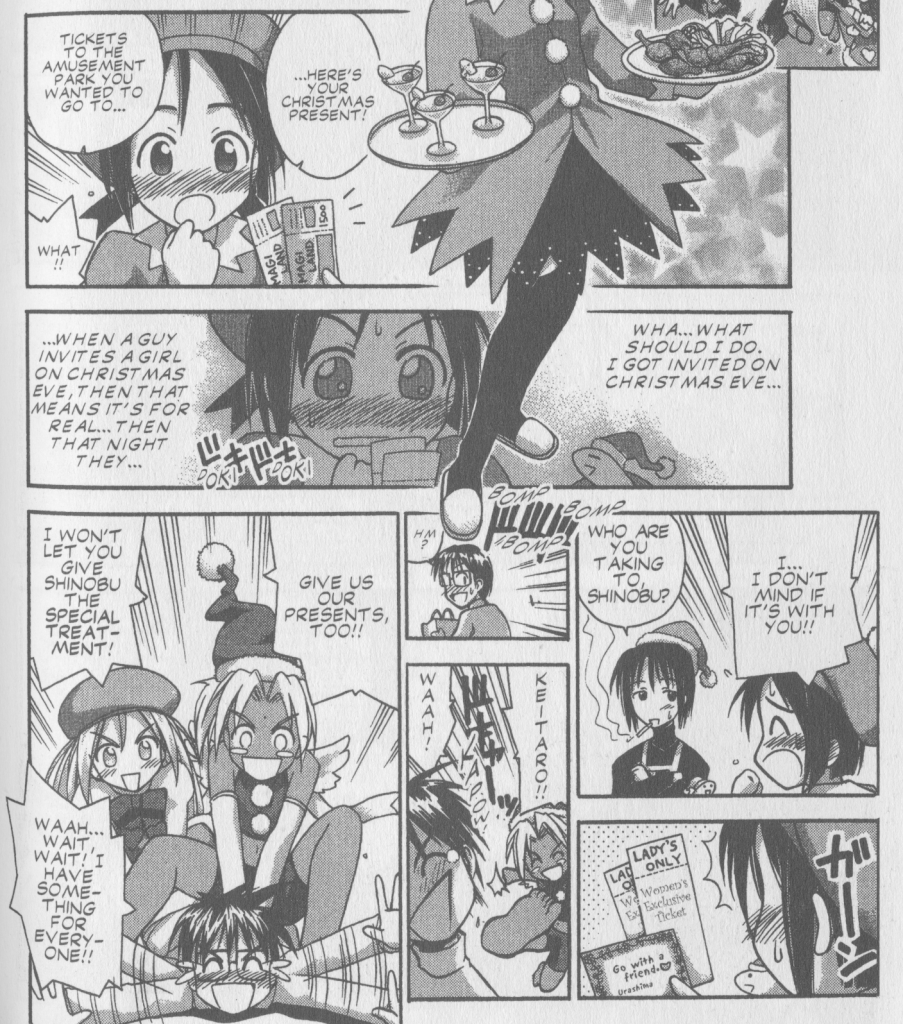 I know that Ken Akamatsu was setting up a joke here, but are there really women’s tickets to amusement parks in Japan? I couldn’t find anything online about this. I’m curious if this would mean there was differential pricing between men and women or if there were days that were just for women. I don’t want to overstate the groping problem in Japan, but it does seem to be referenced in nearly every anime or live action movie, so it could be a nice, safe day where women could stand in long lines at the park without fear of being groped. I’d love any information on this.

One thought on “Understanding Japanese Culture, Humor, and Gender Through Love Hina Part 6”