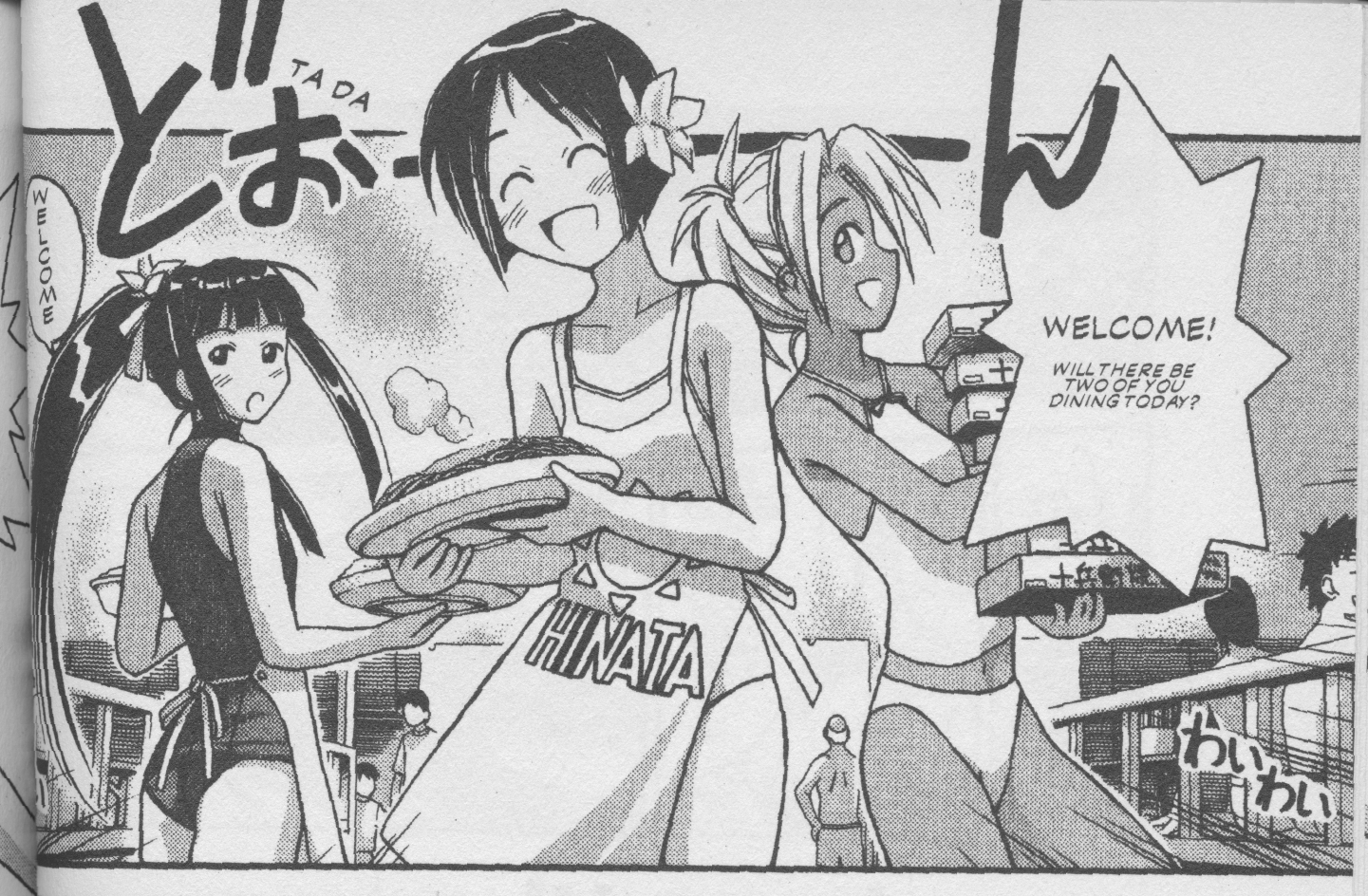 The main characters all go to help run Haruka’s Cafe at the beach. Ah yes, it’s time for the Beach Episode. While at the beach, things are more awkward than usual between Naru and Keitaro because of Seta’s reappearance in Japan.  Keitaro’s best friends show up at the beach and cause Keitaro all manner of trouble by giving him another accidental pervert moment. I’m not sure what’s so funny about Keitaro not being able to remember his best friends’ names that it continues to be a running gag, but maybe it’ll circle back around to funny. There’s then a Summer Festival chapter followed by all the characters putting on a play of Journey to the West (which most Americans know as the story from which Dragon Ball is loosely based) for a bunch of kids staying at the hotel at the beach. Keitaro is metaphorically up against his rival for Naru’s affections, Seta, until Naru decides she no longer wants to do the play correctly.

I’m not sure, but it appears that the implication here is that Haruka’s acquaintances are Yakuza. I’m not really sure what to make of that. After that, Seta decides it would be best for Sarah to have a more structured life and leaves her in the care of Hinata House. Sarah tries to pull a huge prank to piss everyone off and get herself kicked out, but it backfires and she ends up stranded with Keitaro and Naru on an island. And things end up working out for our unlucky protagonist – Sarah kicks Naru while Sarah is asleep causing Naru and Keitaro finally share their first kiss.

At this point it seemed as though Akamatsu wanted us to know that Kitsune works for a big outfit for her writing job – perhaps as a reason for why she always seemed to have money for alcohol despite never being seen doing any work. She returns from a writing assignment in South America. This also makes it seem she may work for a newspaper or news magazine.

The book then shifts into slice of life filler for a while as we get Shinobu wondering about kisses and what they’re like. Motoko is said to have softened since Keitaro arrived – she’s cuter and less of a fighter than she used to be. There’s a weird chapter with Kaolla Su and some kind of werewolf ability to essentially age under a full moon. Finally, we return to plot as Kitsune tries to accelerate things between Keitaro and Naru because, as a reader avatar, she’s sick of the sexual tension.

Having seen Azumanga Daioh recently, revisiting this book, and remembering the Ranma ½ movie, Nihao my Concubine, I was left wondering – do the Japanese really tend to go to the beach for vacation or is it just, as the TV Tropes page suggests, a chance for fan service? As we all know, Yahoo Answers needs to be taken with a huge grain of salt, but it appears – based on this page – that the Japanese do indeed enjoy going to the beach. One of the answers has the person mentioning the beach was essentially standing room only. Of course, manga/anime, like any narrative doesn’t have to include the beach – there are always tons of things excluded from narratives. The number of times I’ve seen a comic book character go to the bathroom are nearly infinitely outnumbered by the times they’ve gone months or years in story without so much as mentioning the bathroom. So, there is definitely an element of fan service to the depiction of going go the beach. Using manga/anime as a source, as this series is about, it appears that it is expensive to go to the beach. There is mention that the perpetually poor characters in Ranma ½ can just barely afford to go to the beach. In Nihao My Concubine they’re traveling on Kuno’s yacht. In Azumanga Daioh they’re going to Chiyo’s beach home. Even in Love Hina it’s sensed that part of the reason they’re able to stay at the beach for so long is because they’re helping Haruka run the cafe.

I feel as though nearly every manga/anime needs to reference Journey to the West. I’ve seen it referenced in quite a few and it’s, as mentioned above, the starting point for Dragon Ball. I thought maybe it was just the anime/manga I’ve experienced, but the linked TV Tropes page mentions, “Many anime series have at least one Shout Out, and some go for outright plunder.” That’s pretty interesting considering the story is a Chinese one and the Japanese and Chinese have a checkered past. The reference in Love Hina, being a play, was the most complete version I’ve seen of it outside of Dragon Ball.

As I mentioned to Dan in Part 2 of this series, perhaps there’s a bit more to Keitaro’s excitement at the girls wearing kimonos than just seeing them in cultural clothing. Apparently, it’s traditional to be naked under a kimono – which I would interpret as going commando since everyone is naked under their clothes, by definition. And, although it’s not universal, some in the West do seem to find allure in the knowledge that someone is going commando. Note the various times in movies and other media where someone has mentioned not wearing underwear. I have seen signs in media and commercials that some women are excited at the idea of a man going commando, but media tends to depict more titillation coming from the idea of women going commando.

Twice in this chapter there is a reference to kisses tasting like lemons. I’ve never heard of that and everyone outside Japan seems to be baffled. However, it’s not something Akamatsu made up, two sites I found online (here and here) mention a survey where Japanese people were surprised/disappointed that kisses didn’t taste like lemons. I wonder if that is told to kids to discourage kissing since lemons are sour? If any readers know what’s up with this, let me know.

This is sort of a continuation from when Keitaro made Motoko act like a girl since she lost the bet. It turns out that she has softened since being at Hinata House and is less of the rigid sword lady she was when she first arrived. Again, we have the theme of cuteness = feminine in Japan as well as being less aggressive.

For the first time in this series we get a glimpse of what is considered to be stereo-typical for an old man – in this case drinking and gambling on a Sunday morning. Frankly those traits in the USA would be trashy – even for an old man, much less for a woman of Kitsune’s age.

Yet another book completed. Join me next time when the plot picks up a bit and we learn a bit more about Japanese culture and sexual norms.