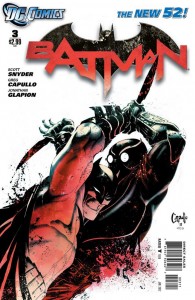 A look at the competition for for my POW! selection this week.  (Links go out to my reviews on Comic Vine)