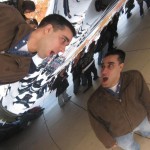 While I spend a lot of time re-reading Scott Pilgrim books, this was still a pretty good week for quality books. As always, whenever you see a link, it leads to a Comic Vine review.

X-23 – Marjorie Liu and Phil Noto are a fantastic creative team for this book, but I hear we’re losing Phil Noto next issue. It’ll be a bummer, but I’ll definitely stick around. The story is pretty neat and I like that she’s hanging around with the FF.

Moon Knight – Perhaps not the most exciting arc-ending story, but I’m down for the great art by Alex Maleev. Unfortunately the night scenes weren’t as pronounced as they usually are (maybe dusk or dawn?) and my favorite part of the art is seeing the all-white Moon Knight contrasting with the dark.

Animal Man – Animal Man and his daughter Max are deep within the Red as agents of the Rot are attacking Cliff and Ellen. It’s got super gross art, but I love it, especially how Buddy couldn’t control his form within the overwhelming influence of the Red.

Mystic – The four-issue mini-series ends with this one. A satisfying conclusion, but I felt like some of the big ideas they introduced early didn’t get a chance to play out. Maybe they’re just sowing the seeds for another series? Still, the art was fantastic. Reminiscent of a Disney movie.

Irredeemable – The story here has been mostly stagnant for an issue or two, but then Mark Waid goes and blows up the status quo yet again. Tons of huge changes for Tony, Bette, Cary, Gil…it’s getting crazy yet again. My only complaint is that I miss Qubit, but I’m sure we’ll see his return sometime soon considering the other returns in this issue…