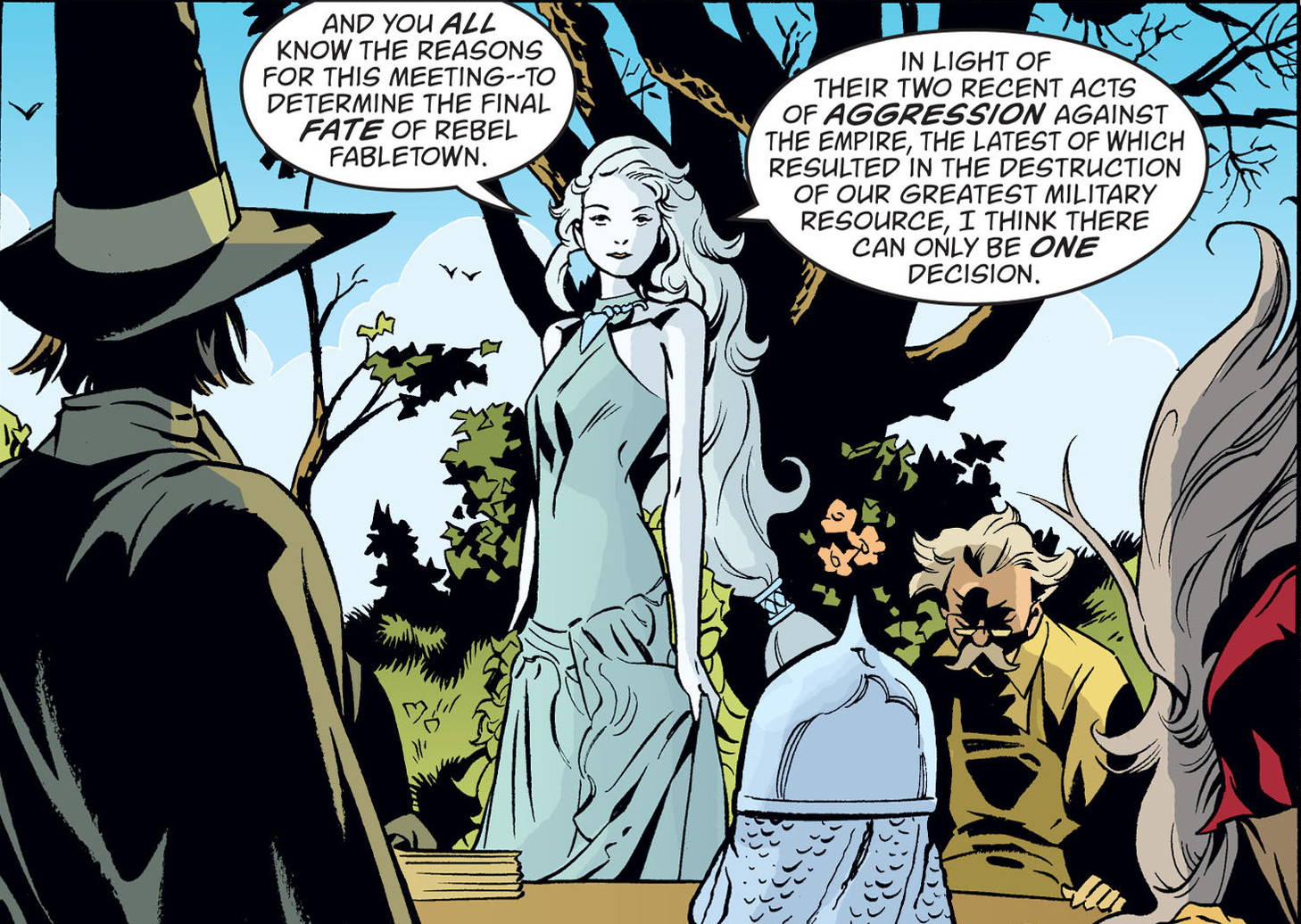 This volume is all over the place. There is a Christmas interlude, we learn of Rapunzel’s plight, and a series of reader questions answered as 1-2 page comics. But the bulk of the volume is about the eye of the storm in the Fabletown and Adversary relations. Each has wreaked devastations upon the other and now Fabletown must see if their Israel Gambit will succeed.

The volume is also about how warfare is also a battle about information. As far as Fabletown knows, Gepetto is OK with peace as he’s sent a diplomatic envoy. The reader, on the other hand, has seen Gepetto’s war council and that he prepares for total war. While Pinocchio is correct that the Fables and the Mundys would be swift with their retribution, the first punch will have already been thrown and the Mundy world would be worse off for it.

Gepetto’s plans for total war are in stark contrast with the way wars have been fought since World War II. For the most part, countries attempt to inflict minimal damage on non-combatants and on infrastructure. This is partly due to most countries now being democratic and having a population weary of total destruction on other humans. Perhaps it is meant to show just how far gone Gepetto is from his origins of assassination for the good of the realm that he is now planning for a complete destruction of a world he knows little about. Yet, while it might make him the bad guy, it truly is the only way for him to succeed against the Mundys. It is all or nothing, especially when it comes to technology vs magic.

Hansel’s story certainly runs parallel to Gepetto’s origins as The Adversary. His cause begins with righteousness – he wants to rid the world of witches like the one who tried to eat he and his sister. However, his inability to forgive (as is required as part of the Fabletown compact) leads to an exile in which he falsely accuses others of being witches. Yes, he is feeding his desire to rid the world of evil witches, but the witches he’s killing are neither real nor evil. Yet, he is so committed to his cause that he kills his own sister when she mentions dabbling in witchcraft.

Well, it’s a short article this time around, perhaps the next volume will delve into more numerous or deeper themes.

Never Bring a Witch to a Djinn Fight: Fables Vol 7 and 8