Friendship to the Max: Lumberjanes #1-20 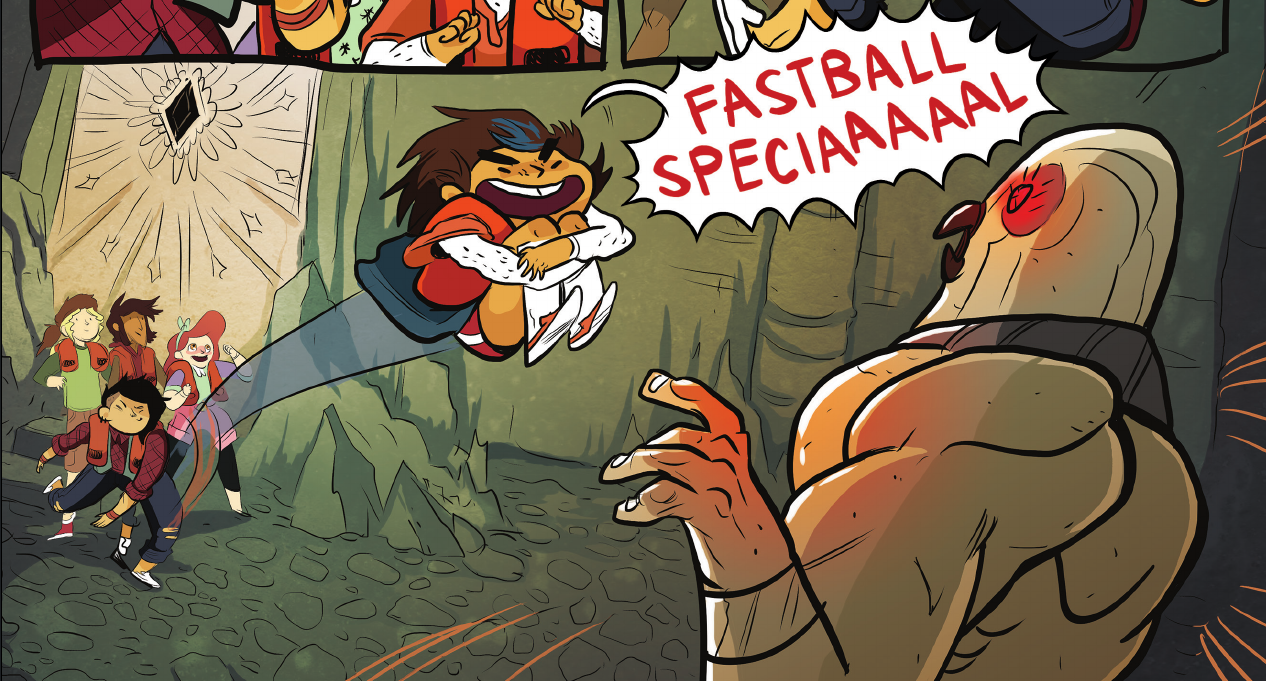 Almost two years ago Kari Woodrow wrote about Lumberjanes #1 here on this site. Her conclusion was that everyone needed to be reading this comic. Having read issues #1-20, I must agree. When I relaunched Comic POW!, I set a focus for the site that it would examine this story-telling medium that we love and focus on how these stories are influenced by the authors and the time and place in which they were written. Lumberjanes is, without a doubt, about being a girl in America in the 2000s. No matter what kind of girl you see yourself as, you will no doubt find a counterpart in the main characters.

Unlike traditional female characters in male-dominated media, the girls are not just one-dimensional characters defined by one character trait. (eg The Flirt, The Bitch, The Clueless one) Instead, the girls seem like the girls and women I know. Take Ripley, for example, she is very similar to my oldest daughter. She is a ball of energy who we first meet with with close-cropped hair who is often wearing male-coded clothing and is the first one to jump in to kick ass. Her energy reminds me of Ed from Cowboy Bebop. But in the last story arc that ends in issue #20, she is dying to get back to the cabin before the big dance to douse her dress in glitter to look pretty for the dance.  That is my oldest daughter to a tee. She is rough and tumble, but also loves nothing more than to get into a super glittery dress when she’s not doing stuff better done in jeans.

Then there are Mal and Molly. As is typical both in real life and in stories for kids, each thinks that the other has everything figured out. Eventually they realize that they each have strengths the other does have that are brought out by being at camp instead of their usual environments where it’s so easy to fall into a routine. They’re always seen as very close and I spent a good portion of these 20 issues trying to figure out if they were really good friends or more. As you know, in American culture, women can do things like holding hands and being physically close without being lesbian while our culture generally does not accept that of men. (While other countries in the Middle East and parts of Asia have no problem with men holding hands) By the time we get to the end of issue 20 I think it’s pretty clear they’re meant to be dating. While I’m sure at least part of the reason for keeping it ambiguous has to do with keeping the book All Ages, I think it also works well within the narrative of the book because it can be nerve-wracking to work up the nerve to force the issue when you’re dating at camp. Even outside of camp, when I was first reaching dating age, there were plenty of times where I kept things vague for fear of the girl saying that, “No, we’re not dating!” It’s easier to just snuggle and be close without worrying about kissing for fear of rejection.

But what makes this book about being a kid, specifically a girl, in the 2000s is the way that the other girls in Roanoke cabin don’t say anything positive or negative about the relationship. It’s not something that has to be supported, it just is. And that seems to jive with everything I’ve heard about the my generation and the ones below me: racism and anti-gay feelings just aren’t a concern outside of those raised to be racist or anti-gay. If you have friends, you just support your friends. And it’s not because they don’t know what’s going on – one of the story arcs involves Mal and Molly going on a date, but euphemistically calling it a picnic. None of the other girls are fooled. There’s also a great clue on the last page of Abigail’s story arc about the kind of relationship she had with Rosie, the current camp director.

Of course, gay issues are so 1990s. Deep into the book, around issue 17, we discover for the first time that Jo is transgender. My favorite thing about the book is that it seems that Noelle Stevenson and Grace Ellis are writing a layered book with lots of clues there for the reader who’s ready to find them. (Similar to jokes for adults in Disney movies) No one ever says that she’s transgender or draws any attention to it. Instead, when she’s having a moment with Barney (from the boys’ camp nearby – another great camp trope that’s subverted nicely in this book) about fitting in, she mentions never having been able to fit in at his camp. That’s it. If you’re too young to get what that means, it just goes over your head. But I was like….”did that just happen?” I had to go do some research to confirm that’s what the reveal was about. But, again, the great thing about this book is that we don’t have any “special issues” where all the girls learn it’s OK to be trans. That’s just a given. These girls were thrown together in Roanoke and they grow to love each other like friends. Trans people just exist and there’s no need to treat them specially because they’re just people.

In a final, brief word about the characters, I do also like that the authors have avoided invoking the catty fight trope. I know that catty-type fights are a reality for girls and for women. But they tend to be the norm in media while they tend to be much less common in the real world. At least among the girls and women I’ve known, it tends to be much less prevalent than you’d think from a diet of American media. The disagreements and trying moments among the girls tend to be of the types often seen among male characters and that’s refreshing to see as well as providing a reference for the girls reading the book.

Storywise, the plot seems similar to what I’ve seen of the show Gravity Falls. (Also, if you’re old enough to remember this show: Eerie Indiana) To be most precise, it’s a take on Girl Scout Summer Camp tropes meets science fiction and fantasy. So you’ll find warped little takes on merit badges – complete with great pun-tastic names for the badges. There is the aforementioned all-boys’ camp across the lake. The issue that’s campfire scary stories. But throw into that mix yetis in the woods and jackalopes nearby and you’ll have an idea of what you’re in for. The story is low on plot dumps to the point of near non-existence. It’s refreshing, especially in a book geared for younger readers, to just let the story flow. We learn who the characters are and how they relate to each other as they respond to their situations. It’s not until late in these 20 issues that we see the flashback issue that explains how the girls came to be friends and a little about their families. (Again gaining us great points for showcasing, but not drawing attention to gay parents, mixed families, and varying levels of parental involvement). It’s a light read that rewards a repeat reading.

The art is fantastic, both in the individuality of the characters (even in crowd scenes, everyone seems like an individual), but also in how it conveys plot to the reader in conjunction with the dialogue. Early on it impressed me with a series of panels that depicts the relationships between the characters without having to say a word.

There are a few guest artists who put their own spin on the characters. None of them are bad and many of them are wonderful, but they all show how the book would have such a different character without Brooke Allen’s designs. I had a chance to meet Brooke at Baltimore Comic-Con 2015 and she was so great to speak to. (Also, check out Comic POW!’s coverage of the BOOM! panel she was on) She really deserved the Harvey she won at that Comic-Con.

In the end, what’s important about this book is that it showcases real girls and women from many backgrounds without drawing attention to it and making it a “special book”. Girls see that friendships can exist among girls who have different points of view and also see that there is value to being self-reliant and smart. The girls get out of their various predicaments through knowledge of logic, astronomy, and mythology – to name a few of the skills they use. It also has a minor sub-plot showing that it’s OK for boys to be outside of traditional roles and that they can do so without teasing from girls. In short, it is a book I would be giving to every pre-teen girl, but it’s also a book that a man in his 30s can enjoy. It’s a true all-ages book, but it begs to be given to the young female comic reader in your life.

Lumberjanes written by Noelle Stevenson and Grace Ellis with art primarily by Brooke Allen and colors by Maarta Laiho. Letters by Aubrey Aiese.