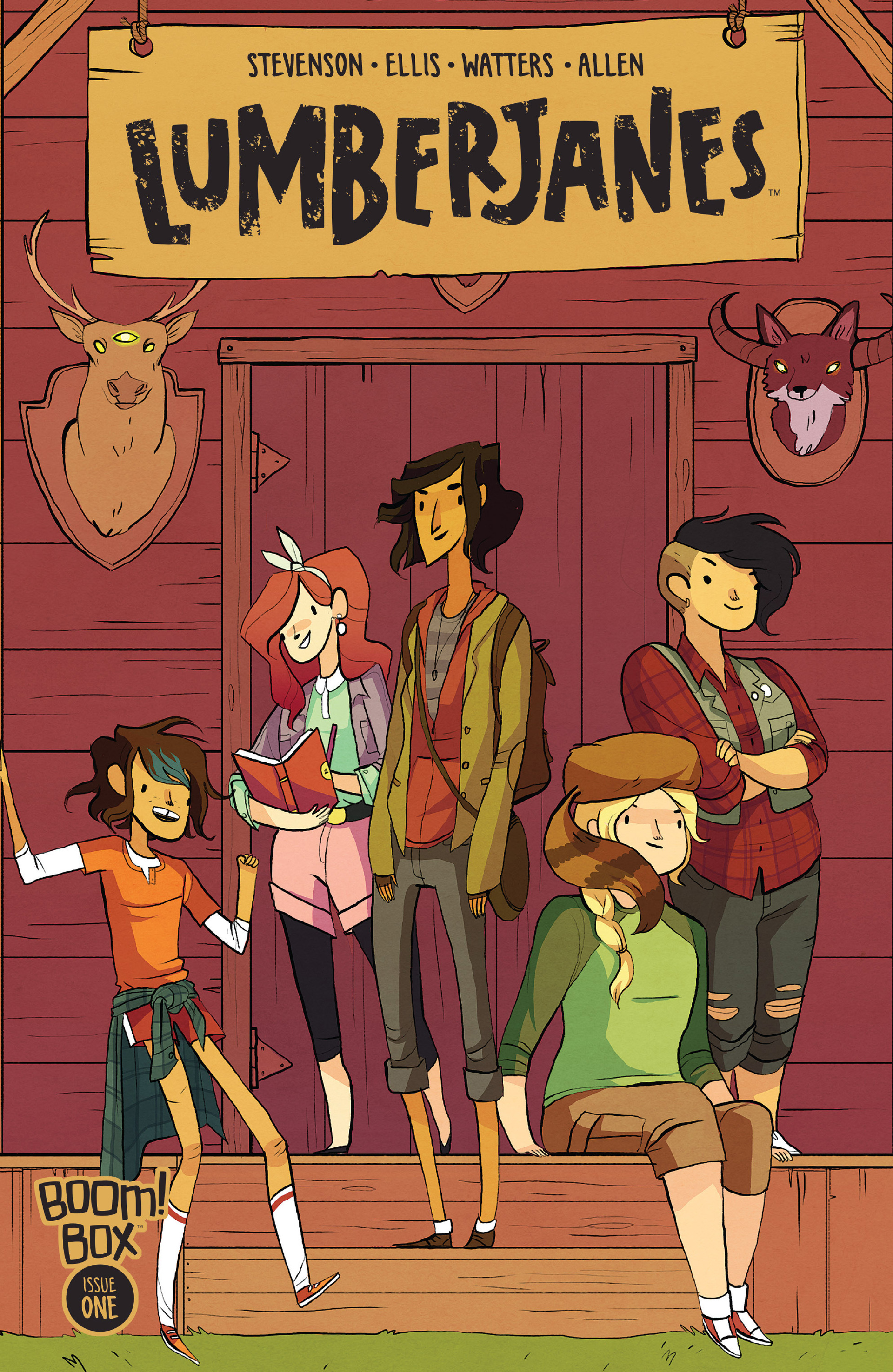 I’m going to say this flat out: You should be reading Lumberjanes.

I know that everyone’s got things they like to read and things that they don’t. Some people really love superhero comics; others are into the horror genre. Most people aren’t going to look at a piece like Lumberjanes, because it looks like it’s aimed at young girls.

I’m here to tell you that you should pick it up anyway.

Yes, Lumberjanes is primarily aimed at children. There’s a big difference, however, between this book and something like Tiny Titans or the My Little Pony series; those books see their target audience as kids and don’t really try to reach beyond that. It’s absolutely fine that they do it that way, because they do a great job at reaching the kids they’re aimed at. Lumberjanes goes beyond that, though – it really does earn the all-ages tag it gets in ways that other kids’ books don’t always achieve.

Lumberjanes is published by BOOM! Studios, and it’s an 8-issue limited series. It features five teenaged girls at a summer camp who have to fight weird supernatural creatures that show up and threaten the other campers and, maybe, the world. From BOOM!’s website:

Jo, April, Mal, Molly and Ripley are five best pals determined to have an awesome summer together… and they’re not gonna let any insane quest or an array of supernatural critters get in their way! Not only is it the second title launching in our new BOOM! Box imprint but LUMBERJANES is one of those punk rock, love-everything-about-it stories that appeals to fans of basically all excellent things.

It sounds like something aimed at young girls – and don’t get me wrong, that’s the intended audience. The thing is, though that Lumberjanes is more than that. It’s the difference between a book being kid-friendly and a book truly being all-ages. The story stars kids, and it’s written in a way that’s easy for kids to access, but it’s interesting, well-paced, and set up like any sci-fi adventure story that an adult would dive eagerly into. It’s got things that appeal widely to kids, but it’s also got things that appeal widely to adults – good storytelling and engaging subject matter are at the forefront.

Brooke Allen’s art style is a lot of fun, and it lends a lot to the book. The girls are all very much individuals; there’s definitely no cut-and-paste face to be seen here. There’s also diversity in the book’s characters, and even though we’re introduced to seven brand-new characters in this issue, by the end of the book I could name each one of the seven female characters on sight.

Grace Ellis and Noelle Stevenson do an excellent job with the story, like I’ve already said. We jump right into the action, and they do a good job of revealing things to the readers as they reveal them to the characters. There’s no huge dump of information; it really does read like the setup of any camp adventure story that’s been published in prose form, with the girls encountering something weird, trying to fight it and get back to their cabin before the counselor notices they’re missing, the inevitable “oh no we’re in trouble” sequence, and the mysterious camp director, who knows more about what’s going on than she’s telling, but isn’t letting everyone in on all the secrets yet.

The book is great. It’s a lot of fun; I thoroughly enjoyed it, have shared my copy with friends, and am planning on giving it to the kids I read comics with (who are both boys, ages ten and thirteen). It’s a good, fun read, but it’s more important than it appears at first glance.

See, Lumberjanes is a rarity among comics. It’s a book created by women, who make up a very small percentage of the comics industry. It stars teenage girls whose mentor is a middle-aged woman; take a look around the next time you’re in your local comic shop and you can see how uncommon that is. There are characters of color. The girls are portrayed positively; it’s made very clear that it’s a group of girls on this adventure, but it’s just a part of the story, rather than something that feels like a gimmick on the publisher’s part to attract a new audience.

Most of all, though, Lumberjanes is a book that’s marketed towards girls. Making it about girls is one thing; titles like Ms. Marvel or Batgirl have shown that books featuring girls will sell. Lumberjanes isn’t unique in that respect. Ms. Marvel and Batgirl, though, are part of a larger story; they’re not guaranteed successes, but given the popularity of Big Two comics and the roles that the titular characters play in the stories told in those universes, those books have a good chance of being picked up based on prior readership. They’re side stories in a larger story, and though they’re both excellent books, they’re not standalone adventures. Lumberjanes was created to be exactly what it is, and it’s not being supported by any other BOOM! Studios projects or larger storylines. It’s not a niche for girls in a larger story. It’s the whole story, which is very, very rare.

It also doesn’t get too juvenile; it’s obvious that the My Little Pony books are specifically marketed towards girls, but they tend to be for a younger audience. What makes Lumberjanes great is that it’s a book that’s more geared towards girls than pretty much any other book out there, but it’s not trying to shove sparkles and makeup at the reader. These are girls in a fantasy story; the first few pages show them battling three-eyed magic foxes, and they don’t need to be saved.

I can’t stress enough how important this book is. I really can’t. It’s a well-written book by women for girls, but it’s approachable for adults, and it’s something that isn’t so feminine that young boys would be put off by the cover. It’s an action-adventure story first and foremost, and it’s filled with female characters. They support the story and move it forward, and they do it by supporting each other and working together (more or less). It’s positive representation in comics for a group that doesn’t often get treated in a positive way.

Lumberjanes. Written by Grace Ellis and Noelle Stevenson; art by Brooke A. Allen. Published 2014. Find it on comixology.

One thought on “Read This Book: Lumberjanes #1”