Who is The Green Hornet? Part 3: Kevin Smith vs Mark Waid 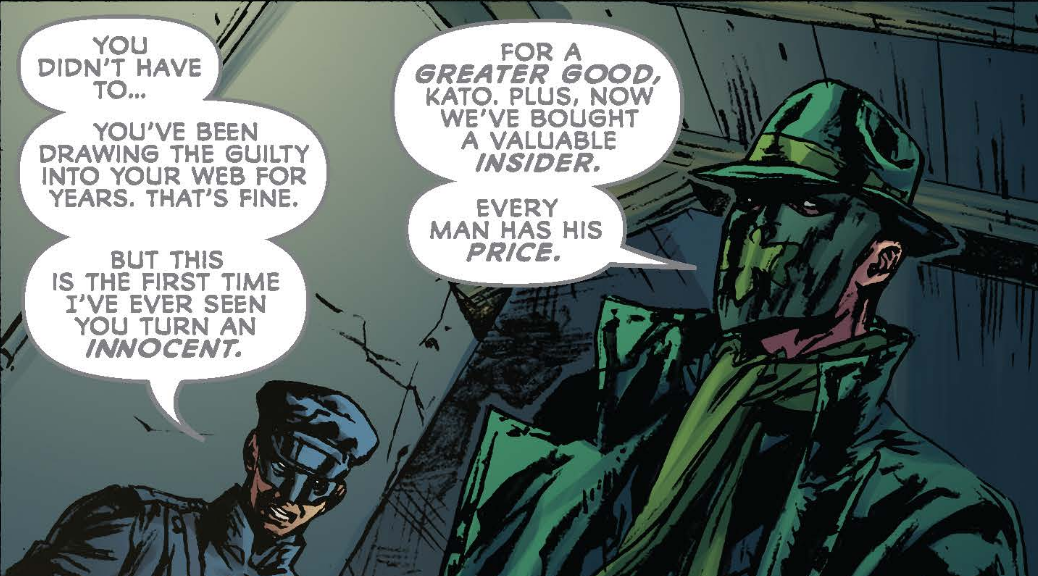 Back in January I wrote about Kevin Smith’s take on The Green Hornet. In February I wrote about Mark Waid’s first two Green Hornet volumes. Although it’s not unheard of with the Big Two, it’s certainly much more rare to have the freedom to interpret characters as you wish. Take a character as iconic as Spider-Man. Until Miles Morales (nearly 50 years into the character’s history), Spider-Man was always Peter Parker. Nearly every aspect of his character is immutable. In fact, that’s one of the reasons his marriage was dissolved – he didn’t have the old Parker luck with women. Yet, because Dynamite is working with licensed properties a few volumes at a time, each writer gets a lot more leeway in how they can interpret the character (with only the licensor typically making any objections).

As I mentioned in the introductions to the previous two articles, while The Green Hornet is a classic character going back to the days of radio dramas, I’d never had any exposure to The Green Hornet until reading these two versions. It was also interesting in that the first one I read was Kevin Smith’s version, which is more of a reimagining. Mark Waid’s Green Hornet seems to be much closer to the source material. There were six major differences I identified, so let’s get to the differences and how I feel they affected the narrative and interpretation of the character.

First off is the difference in Britt Reid’s marital status. Kevin Smith has Britt Reid married while Mark Waid has him single. In modern super hero comics there are very few heroes who are married. There are many reasons for this – some are in-world reasons and some are story-decision reasons. The story decision reasons vary, but one benefit of unmarried characters is variety in their partners. This can help keep the story fresh as it introduces characters that can come and go without affecting the main narrative. Additionally, in the hands of a good writer, it can shed light on the characters themselves, each partner can bring out or exacerbate a trait of the hero. Additionally, the partner can be in more peril because we tend to fear more for transitory characters than permanent ones. The most common in-world reason for the heroes to go without a partner is fear of the partner being harmed to get to the hero. This is, obviously, a rational fear given the mindsets of many of the enemies and also if the character were to look around at what happened to other hero’s partners (including fridging), they’d conclude a partner would be a weakness.

Of course, Smith’s reason for Reid’s marriage is for story convenience. The story is actually about the son’s journey and there needs to be a relationship for a son to exist. An out of wedlock story complicates the narrative Smith is trying to get across – estranged son who’s kind of a jerk for hating his rich father who’s given him everything. To me, a married Green Hornet is a Green Hornet who has both a goal (make the world safe for his family) and a pressure to retire (to be there for his family). I think it’s a dichotomy that makes him a much more interesting hero than those who are just doing it out of a sense of good. While heroes can be inspirational in their selflessness, I think their unrelatable motivations are a big part of what led to the rise in the anti-hero in the 80s as well as the cynical deconstructions and reconstructions (Watchmen being the classic example). Smith’s Hornet, however, is just an empowered version of what any of us want for our community – an safe place where corruption has no place.

Waid’s Green Hornet is more impulsive. I’ll explore this more later, but certainly at least part of this stems from his non-marriage. I also compared Green Hornet to Batman in both articles and I think Waid’s Hornet is more Batman-like. He’s dedicated to a fault. He’s about as much of a jerk to Kato as Batman typically is to his Robins (especially when they’re older). No one will get in his way, even if it means ending up alone because he drove everyone away. Like Batman, this Green Hornet can often be seen as operating in the way he does because he’s rich and somewhat thrill-seeking.

Unsurprisingly, each version of the Green Hornet hews to its tropes, leading to different storytelling and different visual styles. Smith’s Hornet was supposed to be a movie script. It certainly reads that way. It has lots of one-liners and big set pieces. It has a more breakneck speed and it conveys the message that young is cool. Waid’s Hornet takes more cues from its pulp roots. The story is pure pulp. I could certainly have seen such a story – Nazi sympathizers try to sabotage the US from the inside – as having been a popular war trope. The pace is also more deliberate. But, of course, the biggest difference is in the ending. At the end of Kevin Smith’s Green Hornet, the good guys have won and the bad guys have lost. We know Reid Jr and Mulan are going to have great kick-ass adventures together. But at the end of Waid’s run, it’s a pyrrhic victory. Innocents have died. A good cop went mad. Reid’s secretary is in jail. He’s been forced to return to an identity he was trying to retire. Like any pulp hero he’s almost lost as much in his win.

Continuing on from this theme is the role the Katos play. In Smith’s writing, Kato is more of a Mist Miyagi character. He’s the older asian guy who can kick everyone’s butt at the bar as well as the enemy’s goons. He’s somewhat cryptic in how he trains Reid Jr. It’s all very Hollywood. In Waid’s Hornet, Kato is much more of his conscience. Just as waid has made him the more Batman-like of the two, Kato serves the Robin role. Traditionally, that’s the role of keeping the hero grounded emotionally and mentally. I like Waid’s version as it’s a more nuanced asian role, but it doesn’t take away from the pleasure of enjoying Smith’s more stereotypical depiction. This is also an interesting place to mention that Kato is Japanese in one version and Chinese in the other.

None of the Green Hornets involved in these two stories are at the same place in their careers. Smith has an experienced Hornet at the beginning and a neophyte Hornet afterwards. Waid has a Hornet who’s been working at this idea of Hornet for a while, but is still new enough at it that he’s still learning new tricks and ideas. This, naturally, leads to different crime fighting styles for the different Hornets. Smith’s Old Man Hornet is confident in his skills – his witty phrases are well-earned. The series opens with him taking out the last gang left. Smith’s Reid Jr has a young man’s brashness. First he ignores Kato’s warnings to get out of town, then he thinks he can take of things on his own. Finally, he understands that he needs the help of all three Katos: Elder Kato as a mentor, female Kato as a partner, and mechanic Kato to keep the Black Beauty running. Waid’s Reid is somewhere in the middle. He’s far enough along in his career to stay away from rookie mistakes. But he’s still a bit brash without, as I said above, a family to depend on him. He also has the confidence of youth to walk away from the newspaper board room and simply start up with a radio company. This, coupled with his Batman-like focus ends up complicating things for him as chaos takes the reigns and things don’t always go as planned.

Of course, the time periods are different. Smith’s Reid Jr is essentially operating in the present – hounded by paparazzi and the like. Waid’s story takes place in the 40s. As I mentioned in the previous articles, different technology levels lead to different challenges for the characters. Waid explores these differences more fully with Reid using his newspaper to turn public opinion in his favor (to convict or to give Green Hornet noteriety). He also uses the radio station and various news sources of the time (like ticker machines) to ensure he has the latest information. Smith doesn’t actually make as much use of the technology in his story. In fact, to see one of the comics that’s doing this best right now, check out Waid’s Insufferable.

Finally, the last major difference I noticed was the reason each Green Hornet has for retiring. Smith’s original Hornet retires because he’s accomplished his task. He has eliminated all the gangs in the city, making it safe for all. To be perfectly accurate, he’s simply taken control of all the gangs as The Green Hornet, but by doing so he’s able to alert the police to what’s going on so they can end up jailed. Waid’s Green Hornet is less about removing all the crime, than controlling it for his own purposes.  This leads to things becoming too complex for him. As everything becomes more chaotic, he engineers the Green Hornet’s death so he can retire. He’d rather do this than have to constantly make decisions that don’t have a clear right and wrong answer. It is a more realistic idea of what it’d be like to be The Green Hornet, but Waid’s also working in a more realistic framework – pulp vs Hollywood. Additionally, by working with Dynamite, Waid has the freedom to be more risky with his character. It doesn’t have to remain mostly unchainged like a comic from the Big Two.

So, did you notice anything else major that I missed? Comment here on Comic POW! and let’s have a discussion!