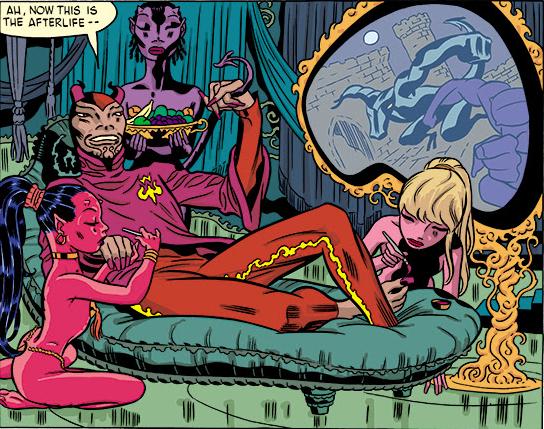 Time once again for a roundup of upcoming Images series so we can find out how Image Comics will get all our money.

The subject-line for the press release for Wayward claimed, “The perfect new series for wayward Buffy fans.” I’m currently working my way through Buffy Season 9 (article forthcoming), but after the insanity of Season 8 (which did have lots of high points), there are many Buffy fans that have become disillusioned. My wife is one of these – she loved the TV show and gave Season 8 a chance, but refuses to read Season 9 after what happened last time. The fact that Buffy was on UPN/WB/The CW kept me from watching it at the time. However, I did really enjoy it on DVD, so I’m excited to see another story in the same vein. I’m not really familiar with the output of the creatives, but I definitely want to give it a chance, especially since it mentions Japanese mythological monsters. My time with manga as well as some recent Japanese sci-fi short stories has left me wanting to explore that part of Japanese culture a bit more. Here’s what the press release says:

Writer Jim Zub (SKULLKICKERS, Samurai Jack) teams up with penciler Steve Cummings (Legends of the Dark Knight, Deadshot) and color artist John Rauch (INVINCIBLE) to create a Buffy the Vampire Slayer for a new generation in WAYWARD, coming from Image Comics in August.

Rori Lane is an outsider by nature, but moving to Tokyo to live with her single Mom has only exacerbated her weirdness. She’s feeling out of sorts, worried about fitting in and, as if that wasn’t enough, strange things are beginning to happen. Glowing symbols and patterns are starting to appear before her eyes… and she’s the only one who seems to notice.

“Wayward is a coming-of-age story filled with mystery and emotion. It’s also an ass-kicking joy ride with teenagers beating the hell out of Japanese mythological monsters,” said Zub. “Steve and I built this series from the ground up to play to both our strengths. I can’t wait for people to see what we have planned.”

In WAYWARD a group of teens living in Tokyo find a common bond in manifesting strange, supernatural abilities. As they begin to unravel the mystery behind their powers and their common source they’re drawn into a war with the vestiges of Japan’s monstrous mythic past.

WAYWARD #1 arrives in stores on 8/27, and will be available for $3.50 with special variant covers by Alina Urusov (Birds of Prey), Jeff “Chamba” Cruz (Street Fighter), and Adam Warren (Empowered).

I’m cautiously optimistic about this title. First of all, I’m excited that it’s going to be a 5 issue mini-series. Image Comics excels at mini-series (I loved Harvest which I read while working for Player Affinity) and it affords the ability to tell a nice, tight story without worrying about keeping the characters around forever. The stakes are so much higher when you know the main character might not make it. However, the premise gives me pause. I’m not familiar with Marc Bernadin and Adam Freeman, but it’s going to be tough to do this story without being accused (rightly or wrongly) of perpetuating negative stereotypes of people from lower income neighborhoods and potentially race issues. Join me on the other side of the press release for some of my anxieties:

From writers Marc Bernardin and Adam Freeman (Alphas, X-Men Origins: Nightcrawler, The Authority, The Highwaymen), rising-star artist Afua Richardson, and Top Cow’s Minotaur Press comes GENIUS. A harrowing, action-packed tale of a city that declares war on a brilliant young woman pushed to the edge. Complete in five parts, every issue of GENIUS will ship weekly in August.

What if the greatest military mind of our generation was born to a people who are already supremely conditioned to wage war, who know nothing but violence since birth, and must continually adapt to new predators in order to survive? What if the second coming of Alexander the Great, of Genghis Khan, of Napoleon, of Patton…what if it was a teenaged girl from South Central, L.A. named Destiny? And what if she decides to secede three blocks of the ‘hood from the Union? Who is going to take it back from her and her army of gangbangers? Who CAN?

“We’re thrilled to be part of Image’s roster of the new and different,” said Bernardin. “This story—about an urban revolutionary’s war on systemic injustice—is one Adam and I have been wanting to tell for a very long time.”

All five issues of GENIUS will be available weekly, throughout August. GENIUS #1 arrives in stores on 8/6 for $3.99.

Phrases and words that make me think these guys are going to have to either not give a darn about those who misinterpret the story (or just read the press release and pass judgement without reading the story) or just work hard to prove everyone wrong include: “a people …conditioned to war”, “three blocks from the ‘hood”, “gangbangers”.

As for the cover submitted with the press release, definitely sexual objectification, but I do love the strategic use of the caution tape (and the symbolism within the story) as well as the random gamecube controller next to her shoulder.

Every once in a while the commercials (or press release in this case) can end up projecting the wrong image (no pun intended) for the work in question. For example, both the Tangled and Frozen trailers were extremely misleading about the main characters and plots of those movies. I don’t think they intended to do that, they just figured that was the best way to sell those movies. I feel somewhat the same with Imperial. The press release doesn’t really seem like something I’d enjoy. However, Image also included three pages and those make me feel like I would enjoy it. See for yourself:

Mark is a couple of weeks out from the biggest day of his life—his wedding day—but then fate steps in and pulls the rug out from under him. He is faced with an impossible choice: Marry the woman who loves, understands, and puts up with his (many) human failings? Or, leave her at the altar in order to take up the helm of the world’s one and only superhero, Imperial? Up until now, there was nothing in Mark’s life to suggest that he was the least bit remarkable, so why would the retiring Imperial choose him to be the protector of all mankind? Why now? And how will learning to shoot laser beams from his eyes impact Mark’s rehearsal dinner schedule? If the choice is superhero cred vs. true love—does Mark disappoint the world… or the woman of his dreams?

Just because I don’t like something doesn’t mean you shouldn’t check it out. Case in point – Nightworld. The preview doesn’t speak to me, but I can still see the artwork behind both the story-telling and the art itself in Nightworld. There’s a poetry to the narration and a throwback to the visuals that certainly shows that Paolo Leandri is definitely talented enough to create an homage that still feels new and dynamic.  Check out the press release and preview:

Cult-hit creators Adam McGovern and Paolo Leandri (THE NEXT ISSUE PROJECT, Project: Romantic) team up for an all-new series that brings humor, horror, tragic romance, and blockbuster monster fights together in NIGHTWORLD, coming this August from Image Comics.

Sad demon Plenilunio rules a haunted castle with his sleepwalking lover Lidia, and unwisely bargains with the evil Empyre to wake her. He’s in a race for the mystic Soul Key with teen-from-Hades Hotspot and the ruthless Hellena—agents of the Empyre with secret agendas. A four-part thrill ride to hell starts here.

“We couldn’t be happier that our pop-art horror-show saga is at home with Image,” said McGovern. “It’s grindhouse humor and blockbuster visuals like you always wanted comics to be!”

In describing the feel of the art in NIGHTWORLD, Leandri said, “we tried to mix (in real authentic brushstrokes) a cocktail of gothic-horror mood, adrenalized action and personal drama, then garnish with a bit of humor; hope it tastes good!”

NIGHTWORLD #1 arrives in stores on 8/6

See you next time we find out about how Image Comics Wants All Your Money!