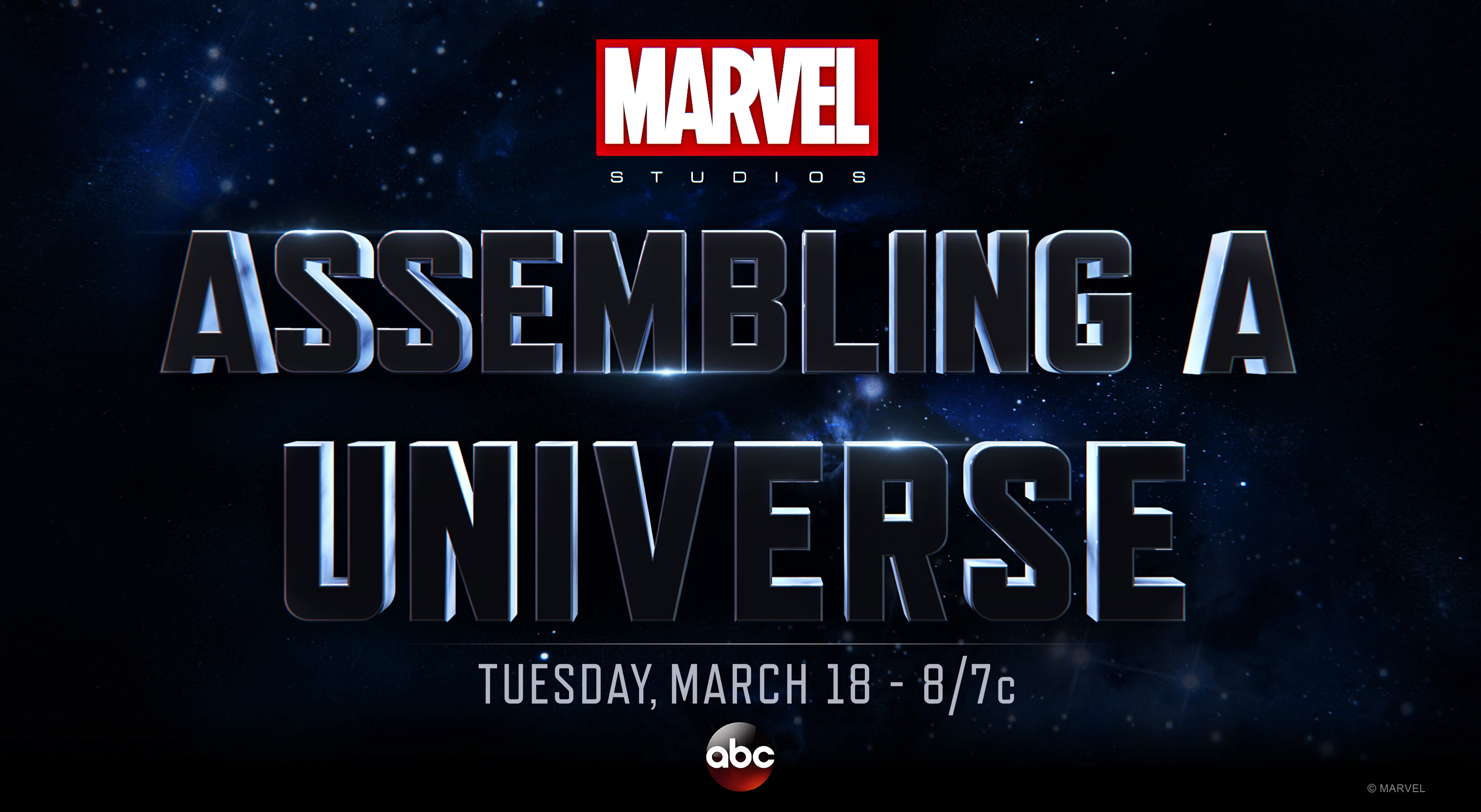 This week instead of an episode of Marvel’s Agents of S.H.I.E.L.D. ABC aired a special about the Marvel Cinematic Universe. Marvel Studios: Assembling a Universe was basically a documentary discussing the process that Marvel Studios went through to create their series of interconnected movies and at the end gave a few teases for upcoming projects. My friends and I, and according to the website Television by the Numbers more than four million other people all tuned in to watch.

Four million viewers isn’t going to win any time slots but it was still good enough to give ABC third place for the hour and drew significantly more viewers than the rerun of S.H.I.E.L.D. they aired on February 20th. More interesting to me was the fact that ABC was willing to air it at all. They have enough faith in the popularity of comic book entertainment that they were willing to air a documentary primarily about movies that people have already seen during primetime. If that isn’t a sign that we are living in a new golden age for comic fans I don’t know what is. However, unlike the Golden Age of Comic Books this new golden age is on the big and small screen. In honor of this new era of superhero entertainment I thought I’d take a look at the current and upcoming live action superhero movies and tv shows from both Marvel and DC.

Amazing Spider-Man 2: The second movie in the rebooted Spider-Man franchise, this film is set to delve deeper into Spider-Man’s world. The villain this time around is Electro and the film is also bringing in Harry Osborne and a deeper involvement from OsCorp. Release Date: 5/2/14

X-Men: Days of Future Past: The continuation of the X-Men movie franchise, this film is an attempt to merge the original X-Men trilogy with X-Men: First Class. Characters and actors from all the films will be back (including both young and old Magneto and Xavier) as well as a whole slew of new mutants. Based on the after credits scene in The Wolverine Magneto and Xavier have teamed up and are seeking Wolverine’s help. This movie will feature time travel and it’s assumed it will try to streamline and fix the continuity lapses from the previous movie. The title comes from a famous X-Men story in the comics and I assume it draws from that storyline. Release Date: 5/23/14

Guardians of the Galaxy: The ragtag team of space heroes that includes Starlord, Gamora, Drax, Groot, and Rocket Raccoon are set to debut this summer. The first trailer sets the tone as a comedic space adventure. This movie is part of the Marvel Cinematic Universe and should connect in some way to the other films. We’ve already been teased in previous movies that the Collector and the Infinity Gems are probably going to be at least tangentally involved. The primary villain this time around, however, is Ronan the Accuser which introduces the Kree to the shared Marvel Cinematic Universe. Release Date: 8/1/14

The Avengers: Age of Ultron: The sequel to The Avengers this film is set to gather all of Marvel Studios heroes together again to face Ultron. There are also new comic characters set to debut in this film including Scarlet Witch, Quicksilver, and Vision. Marvel released new concept art for the movie this week which you can see here. Release Date: 5/1/15

Ant-Man: Two different Ant-Men are set to debut in this film that is being written and directed by the same team that Scott Pilgrim to life. Both Hank Pym and Scott Lang have been cast and based on the early information it looks like Scott Lang will be the primary focus of the film and the most likely character to join up with the Avengers in the future. This film will be part of the Marvel Cinematic Universe, but it’s too early to tell what impact it will have on the universe. Release Date: 7/17/15

Fantastic Four: Fox is rebooting the Fantastic Four franchise. Currently the only real information out is the cast which has caused quite a stir online. This film is currently scheduled for release on 6/19/15 and if it does well Fox has already penciled in a sequel for 7/14/17.

Batman vs Superman: This film is a sequel to Man of Steel and is DC Comics and Warner Bros. attempt to launch their own shared movie universe to compete with Marvel’s. It’s still early in the process but the movie is set to include Batman, Superman, Wonder Woman and Lex Luthor. Release Date: 5/6/16

Fox has been setting tentative dates for sequels to The Wolverine as well as future movies in the X-Men franchise. The Wolverine movie should be out in 2017 but any future X-Men movies are likely dependent on the success or failure of X-Men: Days of Future Past.

Warner Bros. is hoping to launch their own shared universe based on DC Comics so fans can expect more films to spin out of Batman vs Superman with the hope of eventually bringing the Justice League to the big screen.

Marvel Studios has plans to continue the Captain America, Thor, and Avengers trilogies as well as introduce new characters to the big screen. Early rumors hint at a Doctor Strange movie, but it’s too early to know for sure.

Marvel’s Agents of S.H.I.E.L.D.: Currently in its first season this show follows fan favorite Agent Coulson and his team of S.H.I.E.L.D. agents as they take on missions. This show is part of the Marvel Cinematic Universe and often crosses over with the movies, most recently when they helped Sif track down an Asgardian fugitive. The show is also bringing new comic characters to live action such as Victoria Hand, John Garrett, and Deathlock. ABC, Tuesdays, 8:00 PM EST

Arrow: Currently in its second season this show follows Oliver Queen AKA Green Arrow as he tries to right wrongs in Starling City. This has introduced a slew of DC Comic characters including Black Canary, Deathstroke, Roy Harper, and Barry Allen’s Flash. In fact the show has featured so many DC characters that it is futile to try to list them all here. The show has been a real success for the CW and has been renewed for a third season. CW, Wednesdays, 8:00 PM EST

The Flash: The CW has greenlit a pilot for a Flash television show that is intended to be a spin-off of Arrow. If it gets produced it will exist in the same world as Arrow and feature Barry Allen as the Flash.

Gotham: Fox has bypassed its usual pilot process and directly ordered this series for its 2014-2015 TV season. The show is intended to focus on Gotham’s early years following new detective Jim Gordon and along the way is planning to introduce a wide array of Batman villains such as the Penguin, the Riddler, Two-Face, Joker, and Catwoman. They have also cast a young Bruce Wayne.

Daredevil: Marvel Studios is teaming with Netflix to create a series based on Daredevil. The series will be a Netflix excusive and premiere in 2015. The series will then lead into series for other heroes and eventually a Defenders miniseries.

Luke Cage: Marvel Studios is teaming with Netflix to create a series based on Luke Cage. The series will be a Netflix excusive. The series will then lead into series for other heroes and eventually a Defenders miniseries.

Iron Fist: Marvel Studios is teaming with Netflix to create a series based on Iron Fist. The series will be a Netflix excusive. The series will then lead into series for other heroes and eventually a Defenders miniseries.

The Defenders: Marvel Studios is teaming with Netflix to create a miniseries about the Defenders. In this iteration the Defenders will be made up of Daredevil, Jessica Jones, Luke Cage, and Iron Fist and will be a part of a shared story with the previous Netflix shows.

Have I forgotten anything? Which movie/show are you most excited about? What do you think about this new golden age of superheroes? Let me know in the comments!