Mr. Chivalry: One Piece’s Sanji and the Downside of Chivalry 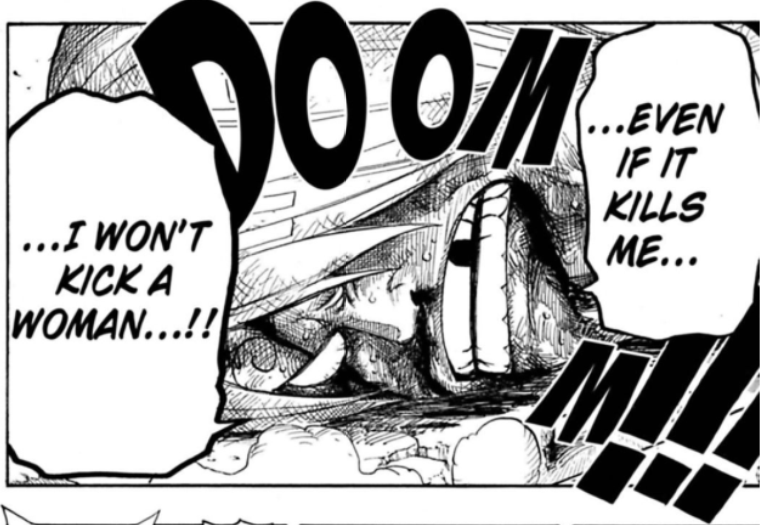 Never hit a woman. Treat women with respect. Protect women in need. These are all common things taught to men from a young age and at first glance they seem to be a straightforward and respectful guide to the interaction between genders. However, ask any girl who was refused a place on a school wrestling team or football team because the boys refused to engage her as the sport demanded and you’ll see where the flaws lie. Of course a boy shouldn’t hit a girl for no reason, but if he refuses to tackle her on a football team then he is extinguishing her opportunity to be treated as an equal and live out her dreams.

I’ve recently had an anime binge and watched the entire series to date of One Piece. The series is about a pirate crew and is based on the manga by Eiichiro Oda. While watching I became particularly interested in the approach the series takes to women and the idea of chivalry. After watching the anime my curiosity was piqued and I went back to look at certain sections of the manga.

In One Piece the character of Sanji is defined by his desire to treat women chivalrously. He doesn’t seem to think of women as less capable than men, often praising and relying on his female crewmates’ abilities, but he is determined to treat women in a way that he deems appropriate. This means that he protects them when possible and absolutely refuses to harm a woman for any reason. In chapter 403 of the manga, pointedly titled “Mr. Chivalry,” that determination nearly got him killed and could have led to the deaths of both Nami and Robin, his two female crewmates that he had vowed to protect.

The entire crew was racing against the clock to save Robin from imprisonment and potential execution when Sanji came face to face with Kalifa. Kalifa is a highly capable assassin who Sanji engaged in a fight. Unfortunately for him, he couldn’t bring himself to do more than block her strikes and kept pulling his own before they connected. He was trying to show her that he could beat her if he did connect, hoping that she would back down, but when it comes to real life or death fights that isn’t good enough. She made quick work of him, totally beating him and removing him from action for quite a while.

After his complete beating, he was found by Nami. When she realized why he lost, she was frustrated and pointed out that if he couldn’t fight a woman, but his honor wouldn’t let him run away from a fight either, then he was in trouble. His inability to do his part meant that she had to step forward to fight an opponent who was much stronger than her in order to get the key they were searching for and also to protect Sanji. For quite a while the anime cut to shots of Sanji sitting alone, with his head hanging as Nami fought in his place which really drove home the position he had gotten himself into.

His situation was a real catch-22 because there was a very real possibility that Nami, would die because he couldn’t protect her against another woman. That put him between a rock and a hard place as far as his ideals. By the end of the arc, Sanji seemed to have come to a decision. He is still categorically opposed to striking a woman–even if it kills him–but in the future he purposely avoids fights with women. He is still proud of his chivalrous nature but acknowledges its flaws as well. He takes Nami’s words to heart and is willing to leave female antagonists to his other crewmates such as Zoro.

Zoro provides an interesting contrast to Sanji in that he does not seem to treat people differently based on their gender. He finds Sanji’s chivalrous behavior (doting on the women, getting them extra treats, etc.) annoying which may stem from his own history with women. Rivalries are an important aspect of many shonen (aimed at pre-teen and teenage boys) manga series and usually involve two boys competing against each other or two girls doing the same, but in Zoro’s case his rival was a girl. As a child he wanted to be a great swordsman, but kept losing fight after fight to Kuina, his sensei’s daughter. Eventually, after beating him 2001 times, she expressed frustration that no matter how good she was the world was stacked against female swordsmen and someday he would surpass her because he was male.

Zoro grew angry at her for saying that he would beat her just because of her sex and told her that she was his goal. He wanted to be as good as her and if she denigrated her own abilities because of her gender then she denigrated his goals as well. He then made her promise that someday one of them would be the best swordsman in the world. Shortly after the promise, she died and he took up her sword to carry on her dream alongside his own. I don’t know if I can stress how impressed I was that a male hero in a shonen series holds a female character up as the person he wants to be most like.

I found the portrayal of the downside of chivalry to be a refreshing change of pace in a series aimed at teenage boys. Of course men shouldn’t hit women or disrespect women, but they shouldn’t hit or disrespect each other either. Chivalry while not necessarily a bad thing, can often repress women with kindness instead of acknowledging them as equals. Both Sanji and Zoro are good men that mean well, but their contrasting approach to women provides food for thought for manga and anime fans.

One Piece, Vol. 1: Romance Dawn. Written and illustrated by Eiichiro Oda. Published 2003; collects One Piece chapters #1-8. Find it on Amazon.

Or check out the chapter “Mr. Chivalry” here:

What do you think about One Piece ? I’d love to discuss it with you in the comments!