The Marketability of Batman 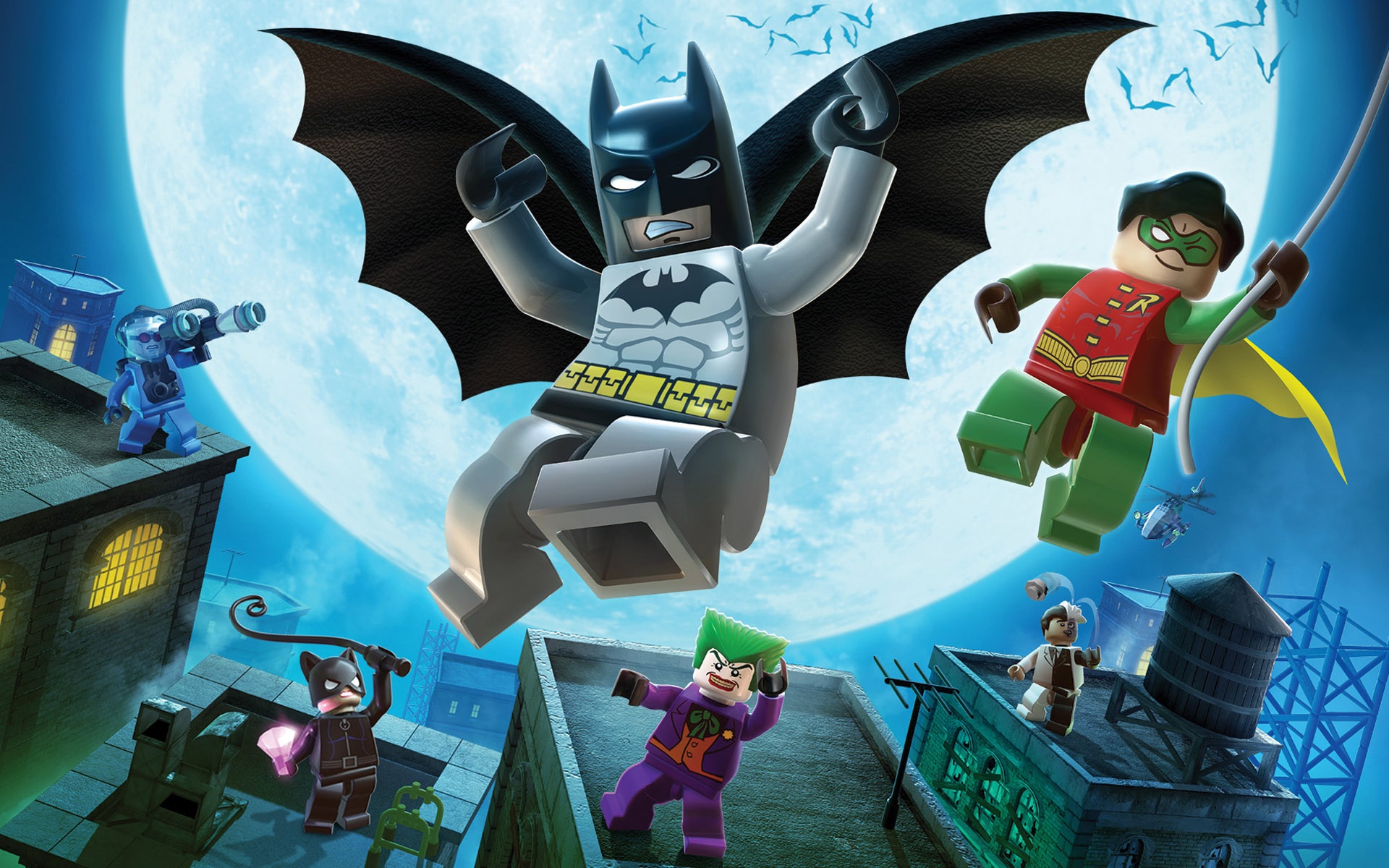 My family celebrates Christmas, so for the last couple of weeks, we’ve been big into the holiday shopping mindset. Items on Christmas wish lists range from small to large, from new socks (thanks for being easy to shop for, Grandma) to new Xbox One games (thanks for being impossible to shop for, nephews). The one thing that caught my eye was on my youngest cousin’s list: he wants Batman pajamas.

Looking at the list got me thinking. My cousin will be ten on Christmas Day; the only comics he’s ever read are ones that my uncle and I have carefully vetted for him. He’s a good reader, and he loves the medium, but there’s no way a kid his age is ready for full-fledged Batman comics. If I saw him reading any of the current main continuity Bat titles, in fact, I’d immediately switch it out for something a lot more kid-friendly. My ten-year-old cousin doesn’t need to be seeing the violence and sexuality that’s in a lot of those comics. A lot of parents agree with me; the Dark Knight is too dark for kids. It’s not appropriate for people under a certain age, which is really strange when you think about how popular characters like Batman and Robin or Superman are with little kids. The recent Marvel Avengers movies have lightened the tone of superheroics lately, but still, the grim and gritty DC heroes are some of the most popular ones in terms of merchandise.

It’s strange to me, as someone who enjoys the Batman comics, that he’s become such a popular character for licensed merchandise. I personally have a few Batman shirts, a mug, some lounge pants, and Batman socks with capes on them; that doesn’t even scratch the surface of the amount of Batman-themed merchandise I’ve seen in person, and there’s tons more on the Internet that I’m sure I haven’t come across yet. Both of the Lego-themed DC video games have been called “Lego Batman,” even though the second one features a lot of other heroes from the DC universe at large. While there are games like the Arkham trilogy, which are definitely not meant for the younger set, there are also games like Scribblenauts Unmasked, which features characters and locations from the DCU in an imagination-based game that’s geared towards kids.

Those are the everyday things. Occasionally, Batman pops up in ways you wouldn’t expect; take Batkid, for example. Last month, a five-year-old boy battling leukemia asked the Make-A-Wish Foundation if he could be Batman for a day. The Foundation responded in a big way, pulling together volunteers from all over the city to stage crimes by the Riddler and the Penguin; Batkid accompanied Batman around the city, aided by San Francisco police, until the crimes were solved. It was a great day for the kid, and an amazing human interest story, but one of the things that stuck out to me while it was happening was a repeat of the thought of my cousin reading Batman: there’s no way that Batman is age-appropriate for that kid.

So how did Batman go from being the crusading Dark Knight to being the idol of children everywhere?

It’s an interesting question, and there’s no one real answer. The easy solution would be to blame marketing: anything that can be done to make a buck will be done, or so it seems. (There’s no other explanation for things like the Uglydoll Ice Bat Plush.) Though they’re beloved by many, many people, comics don’t have a huge market share when it comes to reading materials as a whole; companies like DC and Marvel (and the smaller publishing houses as well) are left trying to find ways to keep their creators paid and their brands out there, and tie-in marketing is one of the easiest ways to do that. Things like action figures have appeal to both the serious collector and the kid who wants something fun to play with, so it’s an obvious choice.

Another possible explanation is that when people think Batman, they’re not thinking of the current run of comics. No, they’re thinking back to the days of the Adam West and Burt Ward Dynamic Duo; the show was fun, campy, and definitely kid-friendly. Though it’s nothing like what we read in the comics today, that cheerful version of Batman is still what a lot of people think of when it comes to the Dark Knight. It could also be that the kids in question have caught reruns of the Bruce Timm-created Batman: The Animated Series, which originally aired in the 90s but is still incredibly popular with kids and adults alike. The Timmverse cartoons are an interesting blend of Batman’s dark nature and a lighter approach, making it accessible to kids without removing the essential things that make it Batman.

There’s also the thought that it could be a combination of the two; a kid who sees a Batman shirt in Walmart might go home and find out about the cartoon, and after watching that, might be interested in merchandise related to it. Having the merchandise gives the kid more reason to watch the cartoon – hey, I’m holding a Batman action figure, I can make him fight my Riddler action figure, just like the TV shows! – and so the cycle is born. DC sees that there’s an increase in people buying Batman: The Animated Series DVDs along with an uptick in action figures flying off of the toy shelves, interprets that as “kids love Batman,” and starts churning out the coloring books and Halloween costumes. Batman’s edges are sanded down, and he becomes the grumpy hero that we laugh at, instead of the darker figure that comics readers are more familiar with.

There’s nothing wrong with this, in my opinion. Sure, most of the kids who grow up with the watered-down version of Batman aren’t going to become lifelong fans of Gotham City and its vigilante crew, but they don’t have to do that. DC is publishing Li’l Gotham and a Scribblenauts Unmasked tie-in comic for kids who want to start reading about their favorite characters as well as interacting with them in other forms of media; Tiny Titans is set to make a comeback in 2014. There are comic book options out there for kids, and they don’t have to be reading things that are too mature for them to be getting their Batman fix. When they’re old enough to read those comics, they may decide they don’t even want to. That’s not their Batman, after all, just like their Batman isn’t the one that most comics fans are used to. They may never read a comic again after aging out of the younger ones (or, like me, they may decide that they’re never going to age out of Li’l Gotham).

That’s fine. That’s more than fine, because Batman has never been a cohesive, coherent character with only one possible interpretation. All interpretations of his character keep the most basic things in play, but think about how much Batman changes from writer to writer. Sure, the writers on titles like Batman or Detective Comics tend to change less often than they do on less popular titles, but they do change eventually. Think about how different Snyder’s Batman is from Morrison’s or Tomasi’s – and they’re all writers who have written Batman in the past few years. There have been tons of writers who have worked with the character since his inception, and each one of them has had their own interpretation. If all of those interpretations are valid, then why shouldn’t the kid-friendly version be, too?

Personally, I’m happy to see Batman wherever I go – the movies, the video game store, Walmart, even theme parks – and I’m happy that people are finding ways to enjoy the character, even if they’re not the ways I tend to prefer for myself. Those people might get into the comics; they might not. They might just play Lego Batman 2: DC Super Heroes until their Xbox 360 stops working. They might go see the movies, or watch reruns of the cartoons, or treasure their DVD collections of the show from the 60s. Whatever form their appreciation takes, I’m thrilled about it, because it’s more love for a character that I enjoy.