Thor 2: Appealing to a Female Audience 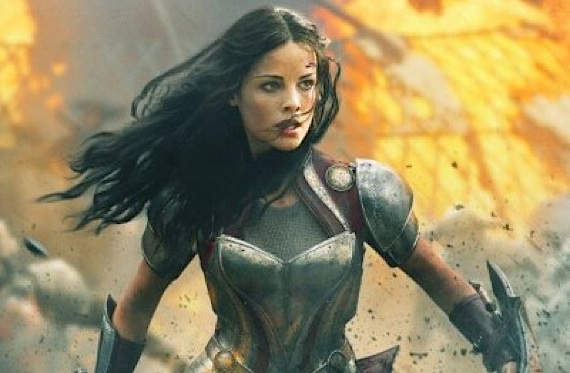 As a lifelong fan of science fiction and fantasy media I’ve grown used to seeing female characters in skimpy clothing and impractical armor. In fact I’ve grown so used to seeing women’s bodies on display that it rarely even registers until it reaches Starfire levels of ridiculous. Fan service aimed at pleasing the male gaze is such an ingrained part of the genre that female fans are expected to just deal with it. After all, sex sells. That’s why, as a woman, I find the Thor franchise to be such a breath of fresh air.

Warning, this article contains spoilers for Thor: The Dark World.

Thor: The Dark World has been in theaters for a couple of weeks now and because I tend to be obsessive, I’ve already seen it four times. During my fourth viewing, I realized something that I hadn’t noticed before and it made me look at the movie in a new way. Not only did Sif’s armor seem practical, but it included a chain mail undershirt which completely covered any hint of cleavage.

I can’t speak to the actual viability of Sif’s armor in a real fight, but I can say that she looks like her vitals are actually protected unlike the many women in armored bikinis or skin tight body suits that populate other movies. More important to me, she looks powerful in a way that doesn’t relate to her sensuality. Most male superheroes are intended to play into a male power fantasy, while the women are usually portrayed in a way that plays into a male sexual fantasy. Very few comic characters are portrayed with a female audience in mind, but I feel that Sif in the Thor movie franchise is playing into a female power fantasy. The above promo poster even features her head on and in battle instead of the all too common pose that has a woman looking over her shoulder in order to show both her breasts and butt.

The smart and respectful costuming doesn’t end with Sif. There are four significant women characters in the movie and none of them are portrayed in an overtly sexual manner. The romantic lead of the film is Jane Foster and she spends the majority of the movie in a long dress with extra loose robes. There is not a hint of cleavage or leg shown. When she returns to earth she immediately changes into a practical outfit that includes jeans, boots, and a flannel shirt.

In fact the only character in the movie that is shown in an overtly sexual way is Thor himself. The only gratuitous fan-service is a scene where he is shirtless, washing his arms. It’s clear that that scene was intended to appeal to the female audience. Instead of giving the audience the equivalent of Princess Leia in a chain mail bikini, both Thor movies have given us one mostly unnecessary scene of Thor without his shirt.

As far as portraying characters in a way that appeals to the female audience, the Thor franchise has also given us Loki. He may not be portrayed in the overtly sexual way that Thor is, but he’s become extremely popular with female fans—if you’re feeling bold you can do a quick Tumblr search to see just how popular. Marvel seems to have noticed and not only did they add more Loki scenes to the movie at the last minute, but they’re putting out a new ongoing comic series featuring him titled Loki: Agent of Asgard. It starts in February, but the first solicitations are out and proudly proclaim that “the God of Mischief is stronger, smarter, sexier and just plain sneakier than ever before.” The word “sexier” caught my eye because I doubt they would be very concerned with advertising his sex appeal prior to the movies.

The Thor franchise is unique in other ways. It’s one of the few superhero franchises with enough significant female characters that it passes the Bechdel test. The Bechdel test analyzes gender in media by looking at whether two or more female characters talk to each other about something other than a man. Despite being a romance movie at its core, in Thor: The Dark World the women talk about the actual plot with each other not just whether or not Thor is dreamy.

The advantage of having several female characters in the movie also means that they’re portrayed with more diverse characterizations. When you only have one woman in a movie she becomes the token representative of all women, but with four you get to have a lot more variety. Jane is a smart scientist who can’t really fight, but can contribute with her mind. Darcy provides the comedic relief with her sarcastic wit and also manages to bring a more down to earth, practical perspective. Frigga is the mother figure, but is also cunning and an amazing fighter. And finally, Sif is the tough warrior that no one wants to cross.

Of course, no movie is perfect, and there are always aspects that could be handled better. For example, Frigga’s death is yet another case of a woman dying to motivate the male characters, in this instance all three of her male family members. I was pleased that at least she died heroically in order to protect another female character, but at the end of the day her death was primarily a way to bring Thor and Loki together and unhinge Odin. Similarly, Jane often fulfilled the role of damsel in distress, but thankfully the trope was partially subverted by having both Frigga and Sif participate in her protection and rescue. She was also able to contribute to the final fight in her own way.

The movie also contained hints of tension and animosity between Jane and Sif because of Jane’s relationship with Thor. Thankfully the movie didn’t go into all out triangle territory and set the women against each other—in fact it did the opposite by having Sif help rescue Jane—but it still concerns me for the future of the franchise. Both women have a romantic history with Thor in the comics, so it makes sense for them to both be interested in him in the movies, I’d just rather not have yet another story about women fighting over a man. Maybe we’ll be lucky and any future movies will avoid making that a plot point.

The Thor franchise may not be perfect, but it’s nice to have superhero movies that don’t neglect their female audience. By providing diverse female characters that aren’t objectified, Marvel is giving the female audience heroes they can relate to and providing a little eye candy for the women along the way doesn’t hurt either. The Thor franchise is one step closer to evening the playing field for women geeks. Now if only we could get an entire movie about Sif.