I’m just going to jump out in front of this and call it a rant. It’s inspired by Kari’s entry last week: So What’s With Batwoman?: Why This Is Important.   I’d passively read about the Batwoman controversy and shook my head. Batwoman was the subject of a few early articles here at Comic POW! (Dan’s 2012 DC Runner Up, vs Wolverine and the X-Men, and vs  SHIELD) and we’ve always praised the art and the storytelling that set it apart from the rest of the Bat Family. However, being apart from the Bat Family was a double-edged sword. When financial constraints hit, Batwoman hit the chomping block for me. I always intended to collect it as an omnibus trade but I didn’t bother supporting it monthly since it didn’t fit in with the other comics I was reading. Since I didn’t read it monthly, I only followed the departure of JH Williams III from the periphery. At first I thought it was an anti-gay stance which I thought was weird after the whole Alan Scott thing. But when Kari brought word that it was an anti-marriage stance coming from Dan Didio himself, it was the straw that broke the camel’s back for me. 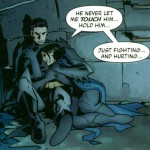 DC had been piling on in ways we have discussed here on Comic POW! both in articles and in the comments. We are only piling on with nearly everyone else in being angered at DC’s handling of the women in the Bat Family, especially Cassandra Cain and Stephanie Brown. I’d also add that their treatment of Batgirl, with apologies to Gail Simone, is pretty messed up. I’ll freely admit (as I have before) that I haven’t read too much of Simone’s run on Birds of Prey, but it does seem to have near universal acclaim. So my best guess is that a lot of what we hate about the New 52 Batgirl has to do with DC Editorial’s edicts. I think there was also a confidence, resiliency, and kick-assedness that came from Barbara Gordon as Oracle. I think it’s short-sighted to say she was limited in a wheelchair. I think it made her more resourceful and made it sting even more if you were a bad guy caught by her. It showed that when Joker shot her that what made her feel better wasn’t some magical surgery that I’m sure makes real-life mobility impaired people pissed (for the same reason that most comic writers don’t have Superman cure world hunger), it was overcoming and it was a great life-lesson in taking the evils of life and making do.

But it’s the more subtle things that got to me. And, from what I know about the average comic book reader – the ones that truly keep the series going by buying issues week in and week out – is that we get most bothered by the subtle things. It’s why we care about continuity and retcons and so on. So Big DC’s insistence that there be a ridiculous 6 year timeline rather than using Marvel’s usual convention of “Then” (which works for all but a few characters that are strongly defined by their time period/events – Captain America, Punisher, and Karma (a Vietnamese X-Man who’s part of the Vietnam War diaspora)) while the Bat Family editors allowed for the suggestions, lies (truths at the time), and/or retcons that Batman’s history was unchanged have just led to confusion, annoyance, and weird retcons just a few months after the New 52 started. The editors have but one job – to make sure that all the books they manage tell a coherent story of their corner of the universe. In the New 52 the Bat Family has failed miserably. We had Peter J Tomasi telling a story about Talia’s cruelty in raising Damian that would have been quite touching had it not been impossible within the six year timeline. While Big DC erased all previous Crises Events, we had Nightwing and, as Kari mentions, Batman Incorporated, referencing Batman’s death and Dick’s time as Batman. Of course, the weirdest thing was the Robin problem. We still had all the male Robins, but it seemed extremely weird for Batman to cycle through so many Robins in just six years. So, in order to make his grieving of Jason Todd make sense, they had to retcon Teen Titans from just a few months before so that Tim was ALWAYS Red Robin, rather than taking that mantle after Damian shows up (if I remember correctly).

We also have had a disgraceful handling of a love story that’s been 20 or so years in the making in its modern form. Batman and Catwoman had a mutually respectful relationship. It was balanced in that they each knew the other’s identity. Catwoman was also in a much more fun grey area – an almost ally of the Bat Family although still prone to stealing things here and there. I touched on this a bit when I went through DC’s latest scandal in which they said they don’t make comics for kids.

I’ve focused so much on the Bat Family during this rant because that’s where my main interests in the DC Universe lie. However, it’s not the only place where I felt DC was losing the point in the New 52. Although I’d never been a Superman fan (comics-wise; I loved The Adventures of Lois and Clark), I started following Action Comics Vol 2 and Superman. I picked up the former based on my enjoyment of Grant Morrison’s pre-New 52 work on Batman and the latter for a complete picture of the Blue Boy Scout. However, it seems that the New 52 was the documentation of Grant Morrison’s implosion at DC. While I did enjoy the return to Superman’s roots as a defender of the underprivileged, I felt that Action Comics soon went off the rails. Just like Batman Incorporated I felt that Morrison started taking Action Comics on weird, random one-issue tangents that didn’t tie into anything. While I thoroughly enjoyed the Barack Obama expy Superman of Earth 23, it didn’t seem to have any point within the larger storytelling. I felt that happened quite a bit in both his books. Then, after saying he was in Action Comics for the long haul, he abruptly quit (or was pushed out?). I only followed Superman for a few issues because it didn’t seem to have a point other than to have a mopey Superman fight a series of unconnected and weird bad guys. I could be misremembering, but at least one team that was on that book quick because of DC Meddling. Of course, as we’ve mentioned and as the Internet has argued ad nauseum, there was no reason to dissolve Lois and Clark’s marriage. I mean they had DECADES of will they/won’t they. I had come to accept the status quo until hearing that DC’s position is that neither they nor ANYONE else ever get married – which is absurd!

If you’re still with me after all this, you may be thinking the same thing many people think after hearing a rant towards creatives. “So, what are you going to do about it?” Well, as the title of this post declares, I’m no longer looking to DC Comics to entertain me. Everyone always says, “The fanboys complain and then they keep buying the books. They don’t know what they really want – they just hate change”. Well, not me. I’d been saving a list of back issues to buy (about 140 issues at this point) on Comixology when I came across some extra money – birthday, Christmas, bonus, promotion, etc. Today I went in and took them all off the list. I think DC is really mismanaging things to the detriment of its storytelling (the ONE thing it needs to get right) and the only way I have of communicating that in a way for them to understand is financially. There is a small footnote to this and that is that I’ll continue with Batman for as long as Scott Snyder is on the book. He and Greg Capullo have developed a well-deserved following and so far DC seems to be staying out of his way. Of course, if that changes or he leaves the book, I think I’m completely out of DC as it is run today. I am also strongly considering buying Azerello’s run on Wonder Woman because DC seems to strangely be leaving him alone and allowing him to take Diana on an adventure through Greek Mythology without tying the book up in their nonsense. And that is that.

I’m still OK with Marvel for now, but unfortunately, because of the financial commitment to their books and all their constant events (I remember when those were just a summer thing) I will have to either buy trades or back issues on Comixology for now. I guess it’s the best advertisement for the independent publishing method either through Image, DC’s Vertigo, or self-publishing. When you’re in charge of everything, there’s no one to blame for your story but yourself. My current favorite writers, Brian K Vaughan, John Layman, and Brandon Graham, seem to really be taking the responsibility that comes with the power of indie publishing and using it for good. They really care about their fans and producing the best story possible. We’ve learned over the past couple years that while the creative teams at DC also love the fans and want to make the best stories possible, that Big DC is standing in their way. The Big Two have a lot of inertia, but in tight financial times such as these, I have to wonder if more people won’t soon be making the decision to leave DC.