Batman and the Batgirls (or, Bat Family Matters Redux) 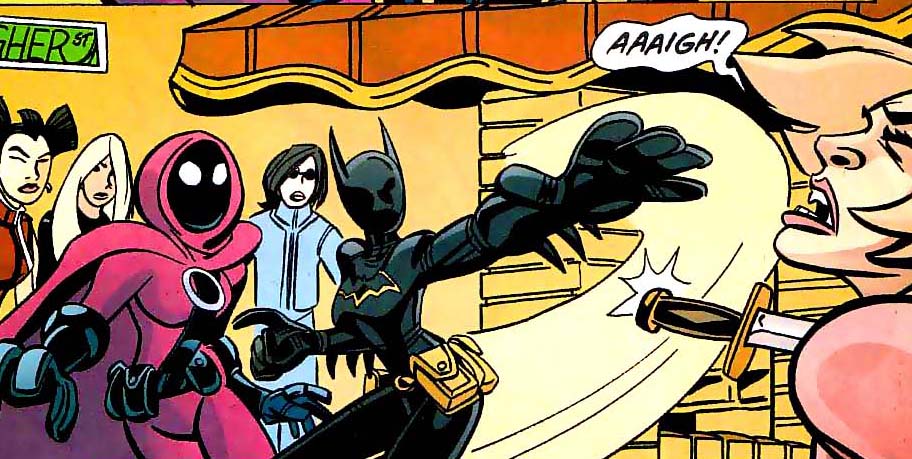 Earlier this week, Eric took a look at how Bruce Wayne interacts with his sons and with Barbara Gordon. Today I’m going to do a similar thing, but instead of focusing on Dick, Jason, Tim, and Damian, I’m going to take a look at the other two ladies of the main continuity Bat family – namely, Cassandra Cain and Stephanie Brown. Since neither woman has yet made an appearance in the New 52, this article will focus on the pre-reboot continuity.

Though she’s introduced to us later in continuity, I’m going to start by talking about Cassandra, because hers is the more straightforward story. (That’s saying something. You’ll see.)

Cass first turns up in Detective Comics #567 in 1999, which is right in the middle of No Man’s Land (the time period where Gotham has suffered from several earthquakes and has been disowned by the US). We find out that Cass was raised by her father, David Cain, to be the perfect living weapon. Cain purposely avoided teaching Cass language – not just reading and writing, but spoken language as well. Instead, Cain and other notable bad guys taught Cass different forms of martial arts and methods of killing. Her training and lack of verbal skills gave Cass the ability to read body language perfectly. After her father forced her to kill a man as a test when she was eight, Cass ran away and spent the next decade or so drifting around the world, eventually ending up in Gotham.

That’s all back-story for the main point, though, which is Cass’ entry into the Bat family. It’s important to understand what the Batgirl mantle meant at this time. Barbara had been Batgirl for years, but Oracle for longer; though Huntress used the Batgirl costume during No Man’s Land to try to inspire hope in a battered Gotham, she operated without the blessing of Batman or Oracle, and was forced to give the costume up. The fact that Batman and Oracle gave Cass their blessing was a huge deal. She was officially accepted as a part of the Bat family, and though she was more of Barbara’s ward than Bruce’s, Cass still interacted with the rest of the family fairly often.

Cass’ contentious relationship with her biological father causes her a lot of pain over the years. She works against Cain in pretty much everything he does, from her first appearance on, but the years of abuse and neglect that she suffered at his hands affect her interactions with others and her view of herself. Bruce is one of the people who is able to help her through that. In Batgirl #50, he manipulates events in order to start a no-holds-barred fight with Cass, realizing that she was best able to communicate through physicality; at the end of the issue, he and Cass have made amends, and are back on good terms.

After the original Batgirl series was cancelled, Cass appeared in a six-issue miniseries in 2008. It focused on her fighting her biological father as well as her personal demons, and the series ends with Cass facing off against Cain. After the big climactic fight, we get a great scene with Bruce telling Cass that he’d like to adopt her so she’s officially part of the family.

So Bruce’s relationship with Cass is, overall, good. They definitely have their ups and downs – he fires her for a bit, and that goes about as well as you’d expect – but in the end, he really does come through for her. She even gets a Bat-hug, and those are given out incredibly sparingly.

Our first encounter with Stephanie is in Detective Comics #647 in 1992. She’s the daughter of Arthur Brown, somewhat better known as Batman C-list bad guy Cluemaster, and his wife Crystal, who is addicted to pain pills. Steph knows that her dad is bad news, and so creates the mantle of the Spoiler to foil his plots. Every time her dad breaks out of jail and goes back to his criminal activities, Steph dons her Spoiler costume and does her best to help bring him in.

For a long time, Steph is a minor character in the Robin title. Bruce doesn’t trust Steph at all, and refuses to let Tim reveal his identity to her. Even though Tim knows her identity from the start – and isn’t subtle about reminding her that he knows it – she doesn’t find out his name until much, much later. They date for quite a while, still with her only knowing him as Robin. Tim wears sunglasses when he meets with her out of costume, and uses assumed identities to take her out on dates, all because Bruce doesn’t trust Steph.

It isn’t until 2004 that Steph finds out who Tim really is. If you do the math, yeah, it’s twelve years between them meeting and Steph finding out. That is, of course, twelve real-world years, not in-universe years, but it’s still a significant amount of time. We know that it’s at least a few years for them, a lot of which they spend dating. Bruce still refuses to trust her… until it suits his needs., at which point he reveals Tim’s identity to her, thus taking the option out of Tim’s hands entirely. What follows is generally regarded as poor storytelling and some kind of awful decisions: Tim quits as Robin, Steph takes up the mantle, Bruce once again decides not to trust her with pertinent information even though she’s now his partner, and Steph ends up getting tortured and killed.

…except not really. After the uproar that it caused with the fans, DC later retconned it so Steph’s death was faked, and she was whisked out of Gotham to recover overseas. Dr. Leslie Thompkins, Bat family doctor extraordinaire, pretty much decided that Bruce couldn’t be trusted with his own kids, and so took Steph away from him so he couldn’t hurt her anymore.

Steph makes her way back to Gotham, surprising pretty much everyone by not being dead. After Batman “dies”, Steph ends up taking the Batgirl mantle from Cass (who goes to Hong Kong and assumes another identity). She goes though a lot of testing from both Oracle and Bruce after he returns, though he doesn’t give her a Bat-hug.

We can immediately see the difference between Bruce’s relationship with Cass and his relationship with Steph. He’s more of a father to Cass, and not just in name – he offers her the Batgirl mantle, helps her when she needs it, and even adopts her into his family. Steph, on the other hand, is treated as an outsider far past the time where that sort of thing is really acceptable. Paranoia is one thing, and there’s no denying that Bruce has that in spades, but Bruce’s blatant distrust of Steph very nearly cost her her life. Bruce trusts Cass almost instantly, but it takes years upon years, test after test, for him to extend the same sort of trust to Steph. We can’t attribute it to him identifying more with one girl than the other; neither one had a great home life, and neither one had experiences similar to Bruce’s when he was young. There isn’t a discernible reason for the difference, which makes it really strange.

So what is Bruce’s deal with parenting?

It’s no secret that I love the Bat family. What’s probably slightly less well known is that Batman himself is one of my least favorite Bat family members, and it’s because of the way he treats the others. You can see just from the examples that I’ve talked about how inconsistent Bruce is in his treatment of various members of his family, and if you’ve also read Eric’s article, you know that it isn’t just the girls that he’s awkward with. It’s my belief that he cares for all of his kids – really, truly, honestly cares – but has no idea how to convey that to them. It isn’t really a stretch when you think about it; Bruce grew up without his own parents, and while Alfred and/or Leslie (pick your retcon) was certainly there for Bruce, they never tried to parent him. Without that kind of influence, and with the added weight of years spent training himself to be the Dark Knight, it’s easy to see how emotional involvement could be difficult for Bruce.

Sometimes it’s easy to see how much Bruce cares. There are several hugs that Bruce gives various kids through the years; for the most part, he does his best to protect them; even when he screws up and really hurts them, it’s generally coming from a good place in him, whether that’s immediately apparent or not. It’s just that Bruce is, though someone who loves his kids dearly, not all that great at parenting. He has his good moments, yes, but in the long run he’s never going to win Gotham Dad of the Year.

Sorry, Bruce. Jim Gordon has that one in the bag.

3 thoughts on “Batman and the Batgirls (or, Bat Family Matters Redux)”