Revisiting the meaning of Asylum 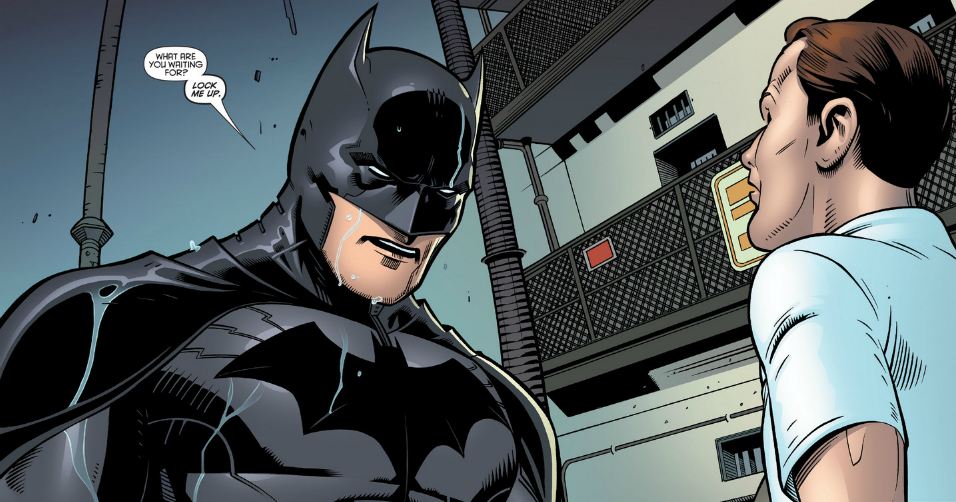 Batman Annual Vol 2 #2 tackles two very interesting and interrelated topics concerning the DC Universe. The main premise of the issue is that Batman is testing security at Arkham Asylum, a Cardboard Prison. I understand the problem the writers of the many Batman books have. On the one hand, they need Batman to succeed in stopping the criminals. Given how amazing Batman is supposed to be in both mental and physical abilities no one would believe that the criminals would always get away – Batman would plan for that eventuality after the first of such encounters. So the villains need to be able to break out of Arkham or else the Batman writers would constantly need to create new enemies for Batman. The most acceptable method, and one that has, therefore, seen a lot more use in recent times involves the inmates bribing or corrupting the guards. This method would not, of course, be caught by the incredible anti-escape measures put in place in the wing Batman is testing. Just as in Jurassic Park, an insider threat is almost impossible to counter. Additionally, one must consider the way in which Harley Quinn became an enemy: Joker’s cunninMany of the the villains at Arkham have incredible mental faculties including Joker, The Mad Hatter, and The Riddler. Any one of them (and possibly others) could trick the guards into putting them into an escapable situation. Also, many of the female villains have used their bodies to give them an edge to escape. Regardless, it would be irresponsible of the asylum not to have safeguards against their escape and it would also be irresponsible not to have Batman test them. At the very least it would imply a seal of approval.

The more important aspect of this issue involved the question of what an asylum is for. It is true that in times past they were very much like prisons at their worst and places to keep the mad from harming themselves at best. We’ve come a long way from those days (not that there aren’t reports here and there of abuses) and modern thought is that asylums should seek to cure their patients as much as possible so that they could either eventually be discharged or would at least not be a danger to themselves or other patients. But the problem is that Arkham has become the canon prison for all of Batman’s villains. This enrages The Anchoress who had checked herself into Arkham many decades ago and was trying to become cured. However, once Arkham became a prison for Batman’s mentally disturbed rogue’s gallery, regular patients like here were left to languish. This makes sense in a realistic(-ish) world in which Batman and his villains could exist. What psychiatrist or psychologist wouldn’t want the fame that came with curing one of Batman’s villains?

Part of the problem, as I see it, is that Batman’s villains are not all crazy and don’t all belong at Arkham. The girls of Gotham City Sirens, for example, were able to have a relatively normal existence during that story’s run although external forces led them to eventually return to their lives of crime. Catwoman and Poison Ivy, in particular, are not crazy. Sure, Catwoman might be diagnosed with some thrillseaking behavior that leads her to act irrationally, but certainly not asylum levels of crazy. Although I haven’t truly kept up with Poison Ivy in the New 52 (other than that she was a good character as part of the Birds of Prey), but she’s traditionally been seen as more of an eco terrorist than a mad person. Harley is the most disturbed of the trio, but her biggest neurosis appears to be her irrational love for Joker and the abuse he’s heaped on her. However, pre-New 52 she’s had multiple streaks of normalcy mixed with some anti-hero behavior. If kept away from Joker she can be kept out of Arkham. Edward Nygma has also often been portrayed in a fashion that suggests he isn’t crazy either. I think this is the biggest reasons that modern depictions of The Penguin do not have him imprisoned at Arkham – he’s just a gangster with a nose like a beak.

Of course Joker, Clayface, The Mad Hatter, Scar Face, and Victor Zsasz are all crazy and should be locked up. Whether or not they should be in Arkham depends on whether people like the Anchoress should truly be there. (OK, that’s a bit tricky because she does have super powers) Is there an asylum for regular people to go to or are they forced to share Arkham with the super villains? Well, it also depends on one more thing – what is the purpose of being in an asylum? As I mentioned above, modern thinking holds that the asylum should strive to help cure the patients or make them less of a danger. I think it seems clear to me that the villains I listed in this paragraph, Joker chief among them, are incapable of being cured. I know we’re treading into a bit of meta here, but although such a statement might be controversial in the real world, the psychologists of Gotham should realize by now that these villains cannot be cured. They do not need to be at an asylum, they need to be in a maximum security prison. By definition, by being at Arkham they should have psychologist visits and checkups to try and assess them, but as I mentioned above that only opens the door for manipulation. They need to be locked up and then automated systems need to care for their needs like eating and hygiene. No one should ever interact with them and they should have no contact with the outside world. Otherwise Arkham Asylum will be asylum in name only.

One thought on “Revisiting the meaning of Asylum”