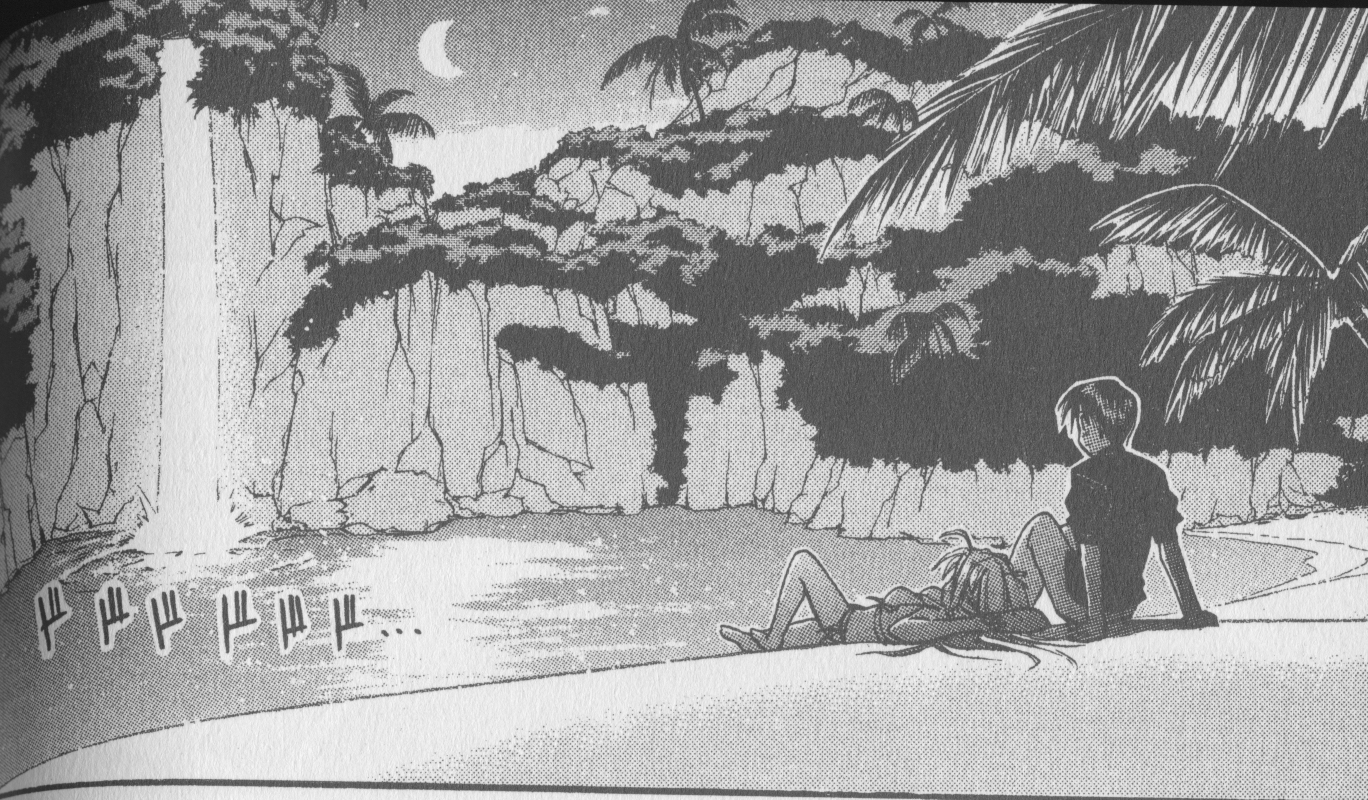 At first this book seems like a repeat of the third book, where Keitaro and Naru went on a trip after failing (where they meet Mutsumi). Keitaro is embarrassed at his perception that he is once again a ronin so he takes a boat ride to get away. He falls overboard and ends up on an island with Galapagos-size turtles. Luckily for him, Seta (his off-again/on-again employer and Naru’s former crush) is on the island doing a dig. He sends a fax to Hinata House so that the girls will know he’s ok. Naru is angry at him for once again running away and sets off to find him. The other girls go to find out the test results and we find out that our ronin have FINALLY passed. Akamatsu will now be able to tell us a difference story than we’ve had in the past seven books. Except we find out that there’s a deadline for filing acceptance into the school. Mutsumi and Naru have given their tickets to the other Hinata House residents, so their applications can be sent in. But Keitaro has his ticket so now the rest of Hinata House has to go find him at the turtle island.

Naru and Keitaro find evidence of a turtle worshiping civilization and end up getting lost in the desert. What keeps this from just being a fan service (see Sex/Gender Norms section) and time-wasting book is that Naru has a chance to see Keitaro as a man for the first time. He seems to have a real knack for excavation (continuing the idea that he is just like Seta – who was also a ronin – and therefore should be Naru’s crush) and it’s in this environment that Naru can tuly see herself with him for the first time. We also learn that Keitaro is better at English than Naru – something that may indicate that, like Mutsumi, he can do well when circumstances don’t conspire against him.

The rest of Hinata House arrives and attempts to save Keitaro, but end up in dire straits themselves.

It turns out they only needed the package post-marked by a certain date so everything was OK in the end after lots of back and forth about whether Keitaro would be able to apply on time. Mr Akamatsu is definitely “mean” here with a huge emotional roller coaster in the last chapter. Both Keitaro and Naru try to confess their love to each other, but fail and the book ends. So while the characters are no longer ronin and the dynamic between Naru and Keitaro has definitely changed during this book, their relationship remains the same.

As part of learning that Keitaro isn’t as much of a dunce as we’ve always thought, we learn he’s better at English than Naru. Also, as in Azumanga Daioh, it is meant to show his mastery of a very difficult subject. From what I’ve seen between Love Hina, Azumanga Daioh, and a few other slice of life anime – mastery of English appears to be shorthand for smarts or at least dedication to learning. This seems to jive with what I’ve often heard about Japan. Everyone from my generation has learned English and we could probably have a basic conversation, at the very least. But the Japanese tend to be very reticent about speaking in English for fear of having an accent. Or so I’ve read. It seems to go together with the fact that character who think they’re smarter than they are (such as the English teacher in Azumanga Daioh) tend to try and speak English when everyone else is too nervous to do it and then they fail horribly.

While Keitaro, Naru, and Nyamo are stranded, Naru fashions a pair of leaf bikinis. When Keitaro sees this he remarks “Oh Man, Naru shaves her bikini line …. This is Heaven” as you can see above. I was unsure of what to make of this when I first read it. After all, nearly all of the cultures I’ve come across would shave the bikini line (although a few I have come across don’t). The only thing that made sense to me with Keitaro pointing it out is that Naru would have had to have already had her bikini line shaved -given that the leaf bikini thing was spur of the moment and she wouldn’t have had a shaving kit handy. So perhaps Keitaro is filling in the blanks and assuming that she is completely bare?

Part of the way that Ken Akamatsu creates the tension of whether Keitaro will be able to turn in his ticket on time is by giving Naru diarrhea. Kitsune gives the quote above about fracturing Keitaro’s image of the female body. This is, of course, not a uniquely Japanese sentiment. American shows like Seinfeld and Sex in the City have devoted episodes about which bodily functions are allowed in front of lovers or even if we’re allowed to “know” they exist. That is, of course, the entire point of the facade here. As the famous book says, everyone poops, but we like to pretend that women don’t even pass gas, much less get intestinal issues. At any rate, it’s another example of how, despite our differences in culture, some ideas are universal.

Join me again in the next installment as we reach the last chunk of the story.