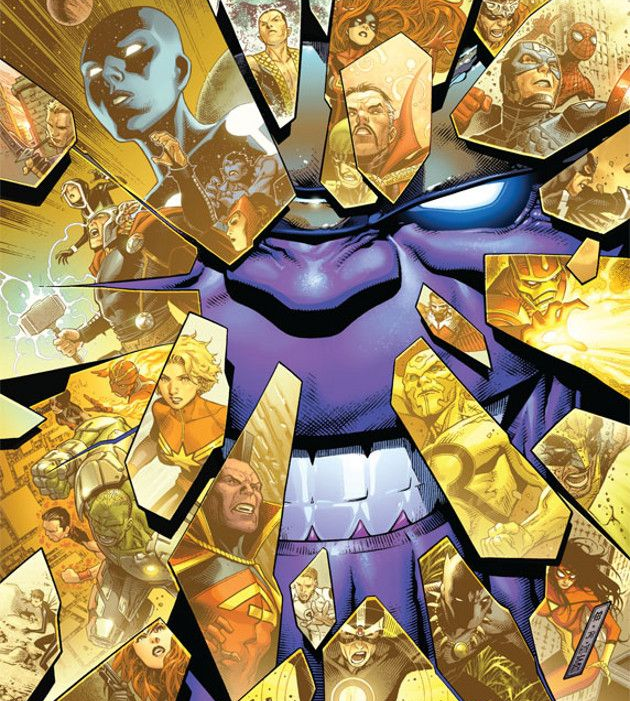 Age of Ultron is barely over, but Marvel is already rolling out Infinity, which is the latest major event from the publisher. Events can be a divisive topic for a lot of comic fans, but I tend to enjoy them as long as they’re telling stories that have been properly set up and they don’t derail other stories in progress. That was my biggest issue with Age of Ultron–it felt like it didn’t matter and was an unnecessary hiatus from other, better stories. There were a lot of other issues, but Kari has already covered most of them in her article Comic Events and Consumer Affairs: Age of Ultron, so I’ll move on to discuss Infinity, which I actually have high hopes for.

The first issue of Infinity came out last week and reaffirmed that it is a natural extension of the stories that have been developing over the last year in Avengers and New Avengers. Jonathan Hickman took over both titles during the Marvel Now re-launch, and he has been working toward Infinity since the start.

This is not an event for a casual comic fan with no knowledge of what has been happening in Avengers or New Avengers. If you have a vast knowledge of the Marvel Universe, or are willing to do your homework before picking it up, you may be able to get by without reading either of the other titles, but I don’t recommend it. This story is definitely about the two titles that spawned it, even if it may affect other titles before it’s over.

Reading a Hickman story can be frustrating at times because he has a tendency to expect a lot of his readers. He takes a long time to slowly set up larger than life sci-fi stories, and sometimes the details can be overwhelming or confusing at first. I read his run on Fantastic Four and FF, and am not ashamed to admit that a lot of it went over my head at first, but by the time I’d reached the climax it all made sense. All of the little plot threads had been woven together in ways I never expected, making for a truly enjoyable read.

I’ve had a similar experience with Avengers because he’s introduced so many new concepts and new characters. His story is full of complex science fiction, philosophical questions, and mythic storytelling, but it also spins its wheels a bit as he gets all of the pieces into place. New Avengers has been an easier read because it’s more character focused and has a smaller cast. Both of them combined have set the stage for Infinity, and I have faith that now that the pieces are on the board, everything will begin to fall into place.

The two books have been written to complement each other, with each telling the same story from different perspectives. Avengers is the lighter of the two, and is the heroic team book you would expect from the title. It has a huge cast of heroes all working together and is told from a more hopeful perspective. New Avengers is the opposite. It features the Illuminati—a secret organization of powerful heroes—and shows them working in the shadows, attempting to save the world in morally questionable ways.

Avengers is told in a very mythic style with narration like: “it was the spark that started the fire—a legend that grew in the telling” as it tells the story of the Avengers. It sets up the Avengers as god-like heroes (or in Thor and Hyperion’s case, actual gods) who have expanded their ranks to defend the Earth. Their might is so impressive that Earth is known as an “Avengers World.”

Avengers has a huge cast, but it establishes early on that Captain America and Iron Man are the core of the team. The idea for the expansion came from them, and the narration manages to turn them into larger than life figures, as you can see in the picture below.

Let’s just say that as a huge Iron Man fan, I’m a little concerned that they seem to be equating him with death. I hope we see some resolution as to why that is during Infinity

New Avengers is a very different book, from Avengers. It’s focused on the Illuminati and delves into each of the characters, asking them to make extremely difficult choices—choices that most of them find morally wrong—for the greater good. In order to save the Earth, each character has to decide if they are willing to destroy other worlds to save their own. Hickman has written the characters into a no-win situation where the Earth is in immediate danger and there are only bad answers. Of course, Captain America was uniformly against any actions that he considered morally wrong—which were all the options on the table—so they mind-wiped him and kicked him out.

The mind wipe occurred near the beginning of the New Avengers run and was echoed in Avengers. Cap was later seen having nightmares that indicated he was starting to remember, but we haven’t been given any resolution. I hope that this is dealt with in Infinity because I’m more than ready to see what happens when Steve remembers.

On the whole, New Avengers is a book about people with their backs against the wall fighting evil with well-intentioned evil, and for that reason I fear those characters won’t fare well in this event. Namor and Black Panther are already at odds, culminating in Atlantis and Wakanda going to war in New Avengers #8, and because of his choices, Black Bolt’s marriage is on the rocks (well, the one he cares about—the guy has five wives).

I wouldn’t be surprised if they all lose a lot more by the end of the event. I just hope it’s handled with care, because too often recent events have pitted heroes against heroes by setting up a clear “right” side and a clear “wrong” side, losing the shades of gray. Events like Civil War and Avengers vs. X-Men lost nuance and ended up villainizing characters like Iron Man and Cyclops before they were over. It would be a shame to set up such complex moral quandries in New Avengers only to negate them in Infinity.

It’s too early to tell whether Infinity will be a success or failure, but the groundwork for the story has been laid over the last year. No matter what happens, the event will at least matter to the stories being told in Avengers and New Avengers going forward, and ultimately that’s all I can ask for out of an event.

And if it doesn’t work? Well, Marvel is starting a huge X-Men crossover event, The Battle of the Atom, next month. The odds are that if they put out enough events, at least some of them will be winners.

Find Infinity at your local comic shop or digital retailer and check out Avengers and New Avengers starting here:

What do you think about Infinity, Avengers, and/or New Avengers? I’d love to discuss them with you in the comments!

One thought on “Pregaming Infinity”