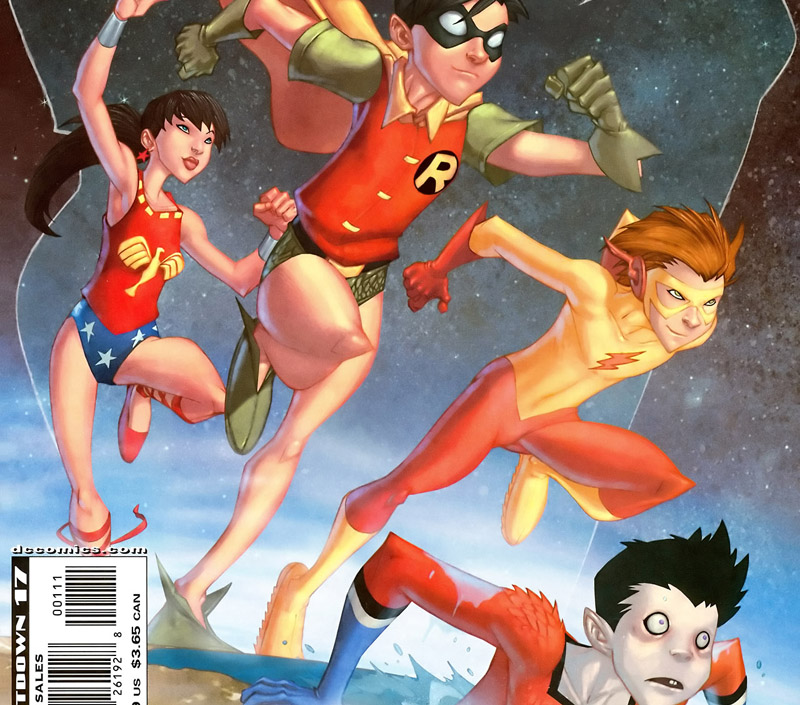 I tend to read comics backwards.

Well, not entirely, but usually I don’t start at the beginning and go on from there. For one, that’s a really intimidating number of comics for a lot of series, and for another, the comics from the silver and golden ages are fun to glance at, but the racism and sexism inherent to media of the time can get a little (or a lot) grating if I try to read too much of it at once. I started reading comics again by trying to read the Iron Man comics from Tales of Suspense, and if I hadn’t switched to reading some more recent miniseries instead of plugging my way through that, I might have given up on comics altogether. Luckily, I picked up Red Hood: Lost Days, and realized that grounding myself in current canon was probably going to be more my style than starting from the beginning.

With that in mind, I read the 90s run of Young Justice and part of the Teen Titans run that followed it before going back and reading some of the earlier stuff. I got a decent handle on the chronology of the Teen Titans (which I consider a personal victory, given that the timelines there look more like a tumbleweed than any sort of straight line), even though I skipped around a lot in the various runs and storylines. Eventually, I picked up Teen Titans: Year One, which was published in 2008, and updated the origin of the group.

The Teen Titans made their debut in 1964, starring in Brave and the Bold #54. Robin, Kid Flash, and Aqualad face off against a villain named Mr. Twister, soundly kick his behind, and decide that they kind of like working together. Their next adventure is in Brave and the Bold #60, where Wonder Girl joins them as they battle The Separated Man. They got their own ongoing series in 1966, and barring a few hiatuses, have been incredibly popular since.

Teen Titans: Year One is a retelling of the origin of the Teen Titans. It was a six-issue miniseries published in 2008, well after the Teen Titans became popular, yet it does a great job of updating the origin without changing it drastically. It begins with Robin contacting his friends, trying to get some information about a case that he and Batman are working. Batman makes him leave for patrol before he gets a response, but we see Kid Flash reply as Robin is walking away from the computer terminal.

The younger set of heroes – Robin (Dick Grayson), Kid Flash (Wally West), Aqualad (Garth), Wonder Girl (Donna Troy), and Speedy (Roy Harper) – all notice that their mentors are acting strangely. The older heroes are going way overboard in their methods, and in some cases, are becoming worse than the criminals that they had always striven to put away. They’re downright cruel to their sidekicks, which causes the kids to band together to put a stop to their mentors’ strange behavior.

Robin comes up with the idea for the Teen Titans to take on their mentors – but to switch up who attacks who, as the mentors know their own sidekicks too well for those attacks to be successful. They split into teams to take down Flash, Wonder Woman, Aquaman, and Green Arrow, and then team back up to take down Batman.

As it turns out, the adults are being mind controlled by a mist creature called The Antithesis (that thing that’s leaking out of Batman). Once it leaves Batman, it also leaves the other adults, who all congratulate their sidekicks. The young heroes talk amongst themselves and decide that they work pretty well as a team, and decide to give themselves a name.

The second half of the story starts with half of the Teen Titans getting ready to do a live interview on television. Robin and Speedy are absent, so Kid Flash volunteers to be the spokesperson for the group during the interview. Before the interview can really get going, though, the team is attacked by The Ant. He mocks the team before taking them out one by one, taunting Robin into joining the fight. Robin leaves the post that Batman had assigned him to in order to save his friends. The entire fight is broadcast live, and when Robin takes The Ant out, the audience and crew go wild.

We then go along with Wonder Girl as she gets ready for a date with Speedy. It goes smoothly at first; Speedy borrows the Arrow Car from Green Arrow, and drives Wonder Girl around to some of his favorite places in the city. Wonder Girl is appropriately charmed when Speedy takes her to a picturesque cliff overlooking the ocean. They get out and make their way down to the beach… and when they return, the Arrow Car is gone.

Wonder Girl offers to call the other Titans for help in searching for the car, but Speedy won’t let her, saying that he already knows who took the car. After refusing to let Wonder Girl carry him, they end up taking the public bus across town to where Ding Dong Daddy’s chop shop is located. Speedy once again tries to do it on his own, and when Wonder Girl intervenes to save his life, the Arrow Car is destroyed. Speedy yells at her, and Wonder Girl returns to Teen Titans headquarters on her own.

The final issue focuses on Robin. It begins with Dick asleep in bed, clearly having a nightmare. In his dream, he’s walking around in a graveyard, where he stumbles upon the graves of his teammates. When he bows his head and touches Wonder Girl’s tombstone, he phases through it and sees her in her bedroom at the Teen Titans headquarters, upset after her failed date with Speedy. He tries to talk to her, but she can’t hear him, which proves to be a real problem when Robin sees The Antithesis (the enemy who had taken over the adults earlier in the arc) stealing up behind Wonder Girl. She disappears before his eyes. Robin goes around the rest of the base, watching as first Aqualad and then Kid Flash are taken as well.

Back in the graveyard, Robin is pushed into his own empty grave, which is then filled in. He finds himself trapped in a void, where The Antithesis tells him he’ll be kept for eternity. Robin breaks out of the mind-prison, pulling the other Teen Titans out with him, and they realize that they’ll have to beat The Antithesis once and for all. We end with the first utterance of the Teen Titans’ battle cry:

One of the things that I love about this story is how true it stays to the original origin. Sure, they’ve brought in things like instant messaging and the Bat Computer, but Dick is wearing the original Robin costume instead of one of the updated versions that I was honestly expecting, and the Arrow Car still looks like something out of the 60s. It’s a modern art style, there’s no doubt, but at the same time it’s very reminiscent of what came before it.

There are story references to the original series as well; in issue 5, Roy and Donna’s date calls back to the relationship that they had back in the day. The Ant, the villain in issue 4, first showed up in Teen Titans #5. Similarly, Ding Dong Daddy from issue 5 showed up way back in Teen Titans #3. The Antithesis is a villain first mentioned in Teen Titans #53, which is a flashback to the first case that the Teen Titans ever solved together… fighting an enemy that turned their mentors evil.

One of the most prominent examples of how true Teen Titans: Year One stays to its roots is in issue 2, where Wolfram does a great job of establishing the time frame without forcing it. The first three Teen Titans to team up are Robin, Kid Flash, and Aqualad, and we get this scene:

It’s a great reference, and it clearly grounds the story within the established continuity.

Updating origin stories is definitely a challenge, and it’s something that needs to be done every once in a while, both to keep the origin somewhat relevant and to give new readers a place to jump in (that is, if they read in some sot of order, like I clearly don’t). It’s been done across a lot of titles, some with more success than others, but Teen Titans: Year One updates its origin story almost effortlessly, giving a new generation of readers a great introduction to one of the most iconic, interesting, and varied teams in DC’s history.