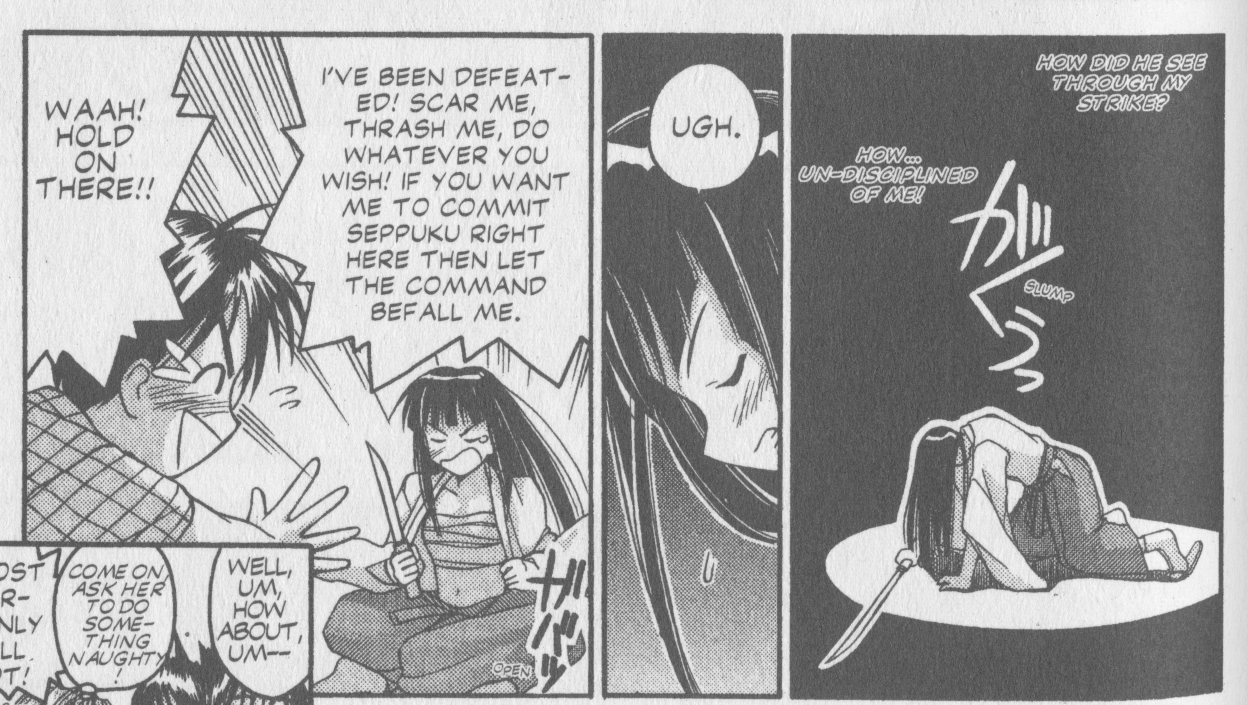 The book begins with Naru’s graduation from High School. The middle of the book seems to take a break from advancing the story. Love Hina becomes Seinfeld-like as we just follow the characters around for a while. For example, following Naru’s graduation we get the obligatory Cherry Blossom festival story. After that there’s a story in which the characters chase the turtle Mutsumi gave them all around the house. While there are no major plot developments we learn about Motoko’s weird turtle phobia. Well, it’s not that weird – of course the toughest character would be afraid of something so silly. We also learn that Kaolla Su is an electronics expert. We then have a story focused mostly on Motoko when Keitaro accidentally sees her changing. That leads to a challenge which Keitaro wins and he gets to dictate the terms. (We’ll look into that a little more in the gender section)

Keitaro then decides he needs a part time job to get discretionary money since his payment for running Hinata House is room and board. His inability to get a job is a bit of a commentary by Akamatsu on the Japanese recession. Ever since the 1990s they’ve had a pretty bad recession. Eventually Keitaro DOES get a job as a cook. He’s good at it, but Kitsune has to show up and ruin things for him, getting him fired. At this point we get some story advancement as Kitsune reveals to Keitaro that it was her tutor that she promised to get into Tokyo University.

Things then pick up when Keitaro starts working for a university professor named Seta. He’s clueless to almost everything going on around him and a bit clumsy when it comes to his driving. Somehow he ends up deciding that part of Keitaro’s duties should be to babysit his daughter, Sarah. Sarah sees this as limiting her time with her father so she decides to try and be a brat to force Keitaro to quit or be fired. Seta shows up at Hinata House and Kitsune tries to keep Seta and Naru from seeing each other in an attempt to keep Naru from swooning over him and losing her growing affection for Keitaro. (Seta was the tutor Naru fell for) We get a great bit of slapstick out of this situation. Seta gives Keitaro a pep talk when he’s thinking about no longer trying for Tokyo University. It turns out that Seta was also a third year ronin. The book doesn’t come out and spell things out, but I think the implication is that Keitaro isn’t actually all that different from her crush, Seta. They’re both clumsy and both took a long time to get into the university. She just met him under different circumstances. As we saw last week, context is key as Naru sans glasses was ok with Keitaro.

Seta and Naru finally meet and she completely loses her mind and gets all clumsy and silly. Keitaro is finally caught up to what we know – that Seta is her long-standing crush and reason for getting into Tokyo University. Naru vacillates between swooning and knowing that it was a crush and it’s a silly idea to still go after Seta. Sensing that his window for getting Naru to date him is closing, Keitaro declares that he “really likes” her. She almost confesses that she also likes him, but by that point events have conspired to make Keitaro think the noble thing to do would be to help Seta and Naru get back together. All the rest of the Hinata girls join in despite Naru’s protests. However, he misunderstands and thinks they’re declaring friendship. Also, ever since Seta showed up, there are constant references that he and Haruka might have been an item back when he was tutoring Naru.

The Cherry Blossom Festival is a pretty big deal in Japan. It’s exactly what it sounds like: a festival that revolves around the blossoming of cherry trees. We celebrate this in Washington DC with a set a Cherry Trees that Japan gave to the US as a symbol of friendship a long time ago. The cherry tree is a very delicate plant. The bloom period only lasts a few days and any rain or heavy wind during this period can destroy the blossoms. I can certainly imagine someone viewing this as a metaphor for the fragility of life and deciding it should be a time of celebration. Nearly every anime or manga I’ve come across that takes place in modern times and follows the protagonists over the course of a year will have a Cherry Blossom Festival issue or episode. The festival seems to consist of walking among the trees and doing carnival games.

I think it’s interesting that Kaolla is a hacker and a genki girl and Ed from Cowboy Bebop is a ditzy computer genius. This is an almost universal type of protagonist – I’m pretty sure I’ve seen similar characters in American media, but it certainly seems to have a special place in Japanese media. Again, I’m not sure what stereotypes Japanese have about Indians and whether or not this has to do with selecting Kaolla as the computer genius and genki girl.

Once again we have the sepukku joke when Motoko offers to do it after Keitaro defeats her. Since we discussed it last week I’m not going to elaborate here. However, we’ll discuss the consequences of Motoko losing the fight in the Gender section.

Both of the above are examples of the sexual assault double comedy double standard. Of course, because Naru is Naru, she beats up Keitaro even though it’s her fault that she sees him changing. Of course, a role reversal wouldn’t have been funny – him treating her the way she treats him when he messes up, but that doesn’t make the double standard any less weird when you step back and think about it. Kitsune is definitely more in the actual realm of sexual assault, but of course it’s funny because it’s girl on guy. The opposite would be quite loathsome. Outside of the double standard, I wonder what a real life Keitaro would do. While he’s mostly resolutely after Naru, he does seem to occasionally waiver in his thoughts to Kitsune, Mutsumi, or (shudder) Shinobu. Although, thankfully, he never considers the latter too seriously. So would he give up on Naru in favor of getting SOMETHING from Kitsune. (I mean he JUST had his first kiss and he’s 19 and he isn’t staying pure for religious reasons) I know there were a few times in high school where I abandoned my Quixotic quest for the unobtainable in order to have a girlfriend with someone I knew would say yes. I know as a romantic comedy character, Keitaro must stay true (although BKV was able to play around with that in Y: The Last Man while still keeping Yorrick pretty pure), but I wonder if a Japanese male would have different cultural expectations than we do in the West. Would he give up on Naru (in that way – it’s clear they’re becoming friends) for a willing tryst or relationship from Kitsune? Although, that does ignore the fact that Kitsune seems to always (or almost always) be drunk when she assaults Keiatro and that presents its own ethical issues.

Of course it makes sense that Motoko would bind her breasts. In addition to symbolizing her rejection of the feminine, it just makes perfect sense for a warrior. As women have told me time and again – physical activity and breasts are enemies. While anime loves to depict breasts bouncing all over the place, bouncing breasts can be anything from annoying to painful for anything more strenuous than a walk. Additionally, given the comical precision of Motoko’s martial arts, I would imagine that one would want a consistent center of gravity that did not have breast inertia in the way.

After the scene from the previous paragraph, when Keitaro walks in on Motoko unbinding her breasts, she challenges him to a duel. The winner picks the punishment. Keitaro wins and chooses that Motoko must be more feminine and we get an instant look into what Japanese culture considers feminine. A large part of it is similar to the West in that it revolves around clothes and what those say about you. Obviously, warrior clothes aren’t feminine, but what is? In Japan it’s more of an emphasis in cuteness than sexiness, although there is definitely sexiness involved.

Being feminine, of course, includes cooking, but it’s a little more than that – there’s the presentation of the food. That’s represented here by the vegetable carving. And she also has to go shopping with Keitaro. On the metro she’s subject to gawking by many of the male passengers.

If it’s unclear, at the end of this page, she’s practicing smiling. This isn’t the first time in manga or anime that I’ve seen smiling associated with being feminine. It hasn’t really been my experience that in the West we expect women to smile that much more than men.

I love that this ends by Motoko rationalizing her lack of feminine traits as a balance with Keitaro’s lack of manly traits. Which is a great way to transition to:

Of course, this applies to both Japanese and American culture – a man who is not forceful or decisive about whether he likes a girl is not manly. Of course, a girl who does this is coy, playing hard to get, and/or cute.

And that concludes this look into Japanese Culture using Love Hina.