Is the Era of the Short Batman Story Over?

May 29, 2013 Batman, Batman Beyond, Batman: The Animated Series, Clayface, Court of Owls, Death in the Family, Night of the Owls, Scott Snyder 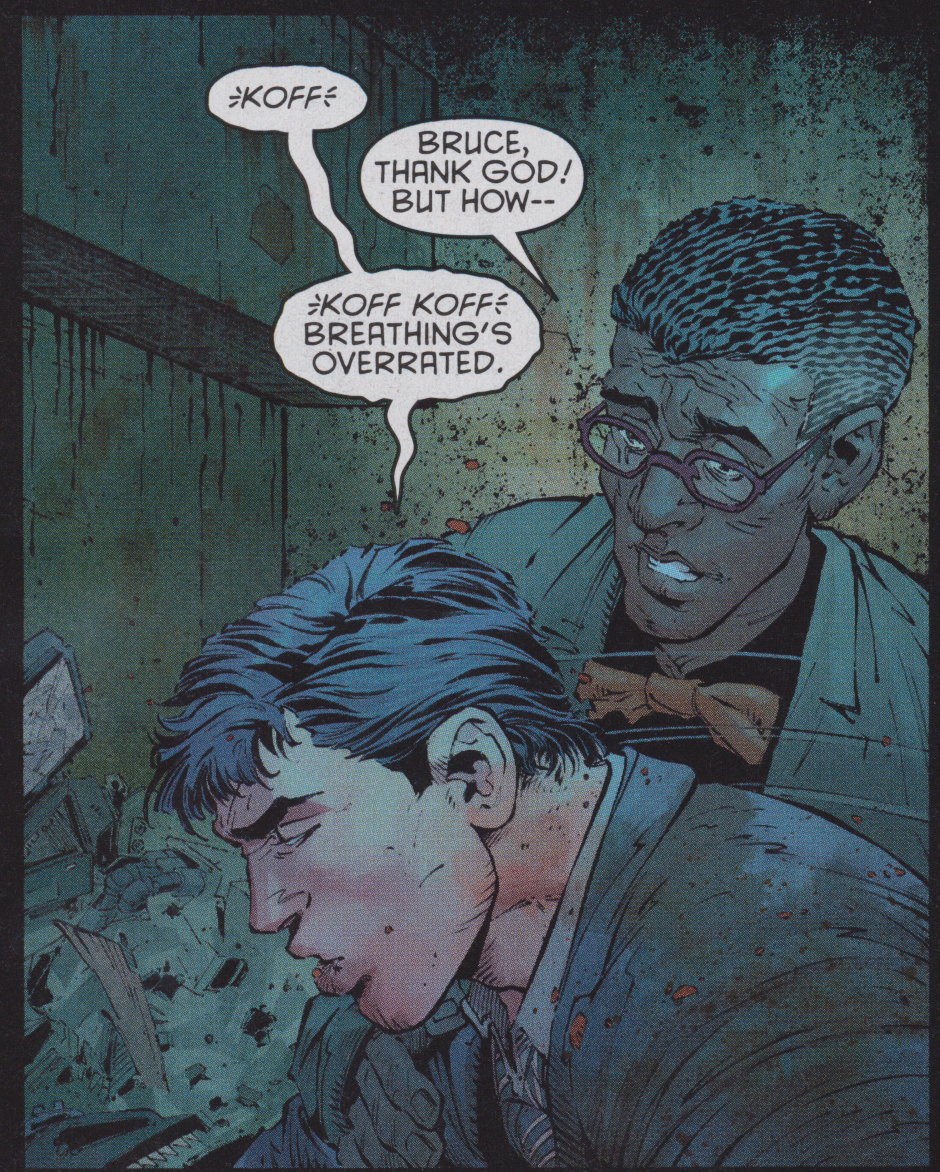 It used to be the case that there were eight page Batman stories and one issue would contain a few stories. Marvel was the pioneer of having long story arcs. But for a few decades now both DC and Marvel have been story-telling via decompressed story arcs. (Best illustrated by Brian Michael Bendis stretching the Spider-Man origin story in Ultimate Spider-Man from 11 pages into 180 pages over seven issues) For those who have followed my thoughts here, on Comic Vine, or when I wrote for Player Affinity – it’s no secret that the one DC Comics title I have stuck with in the New 52. Scott Snyder has been knocking it out of the park pretty consistently on Batman Vol 2. Twenty issues in we’ve only really had four stories.

There’s nothing wrong with this because two first two stories really needed a lot of room to breathe. With the Court of Owls storyline, Scott Snyder was trying to shatter Batman’s belief in his skills. In order to do this, he first had to have a few issues where Batman is getting clues that don’t seem to add up. Then we needed to see his constant denials that the Court of Owls could be real. After all, he knows Gotham inside-and-out and he even investigated the Court of Owls. Then we have one of the most important issues in the arc – the one where Batman is trapped in their labyrinth, slowly going mad. We see that the Court of Owls has done this time and again to the Waynes. And there was the Night of the Owls in which Batman ultimately suffers a lot of failure. It’s easy to get caught up in the fact that he ultimately defeats the Owls and saves Gordon. But in doing so, you forget that there’s actually a lot of death that has happened by the time the Bat Family gets the call to help. Interestingly enough, and something I didn’t truly appreciate at the time I was reading Court of Owls – it’s actually Alfred Pennyworth who puts out the call to the Bat Family. It’s not that Bruce is opposed to it, but in his zeal to solve the problem on his own (he shares that fault with the Fantastic Four’s Reed Richards) he hasn’t really involved them early enough. (Other than Nightwing who ends up involved because of Haley’s Circus and its role in the Court of the Owls) Alfred is always the voice of reason – the one trying to get Bruce to include the others. Finally, there’s the reveal that the main villain believes he’s the lost Wayne sibling. It’s a quite tragic story when juxtaposed with Death in the Family. After all, Bruce is confronted with the possibility that he has more biological family than he thought (something Grant Morrison played with in The Black Hand – another reason I’m sad DC wiped the continuity last year) while neglecting the adopted family he has.
So while one could quibble whether Court of Owls needed exactly the number of issues it used or whether it could have had one more or one less, it clearly needed all the issues involved for the narrative to hit as hard as it did. 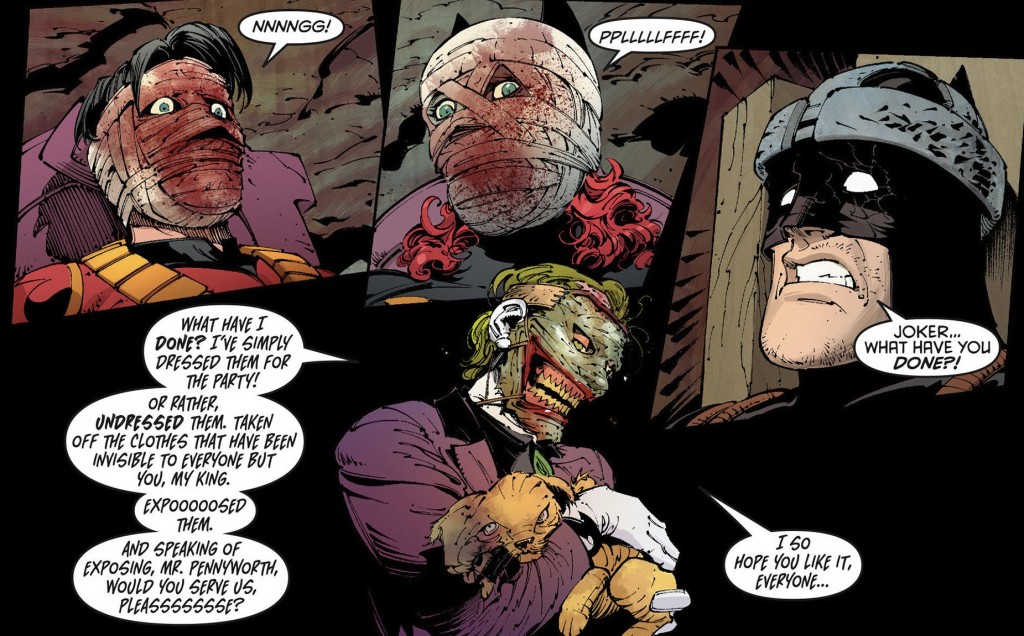 Death in the Family also needed a lot of room to breathe. The Joker may have been a joke as an enemy for a few decades, but he has been a force to reckon with in the most recent decades. It’s a necessary change because there’s something patently absurd about the costumed super hero and super villain in the modern day – especially one disguised as a clown. Scott Snyder has spoken in my places (including my Entertainment Fuse interview with him) that he views Joker as Batman’s court jester and that Joker believes that Batman’s family has made him soft. The family is, of course, a double-edged sword. They are constantly useful to him when they work as a team. But they’re also a liability when they get captured. Again, Snyder needed room to show how much Joker can get into Batman’s head and under his skin. Additionally, he had to plant the seeds of discord so that it really hits home when everyone skips out on meeting Bruce at the end of the story arc. With too few issues it wouldn’t seem believable. But Snyder really made it seem as though the Joker might win (and he did win the battle, if not the war, by making the family doubt each other).

The death of Damian Wayne was a one-shot but it fit in so well with the themes of family that have run though Snyder’s work so far. In fact, it might be the case that he chose to open with those stories because he knew where Morrison was going. After all, what would make more sense than the literal death of a family member after the metaphorical death of his extended Bat Family? And I might also mention at this point that the stories about Harper Row also strongly dealt with family issues.

Finally we arrive at the two part story that led me on the path. The Clayface story is the weakest story Scott Snyder has written on his Batman run. That’s not to say it was a bad Batman story. But it just didn’t feel up to par with the rest of Snyder’s work. The story revolves around an evolved Clayface (why? For the tragic reveal at the end of the second issue?) who now samples the DNA of anyone he touches – allowing him to be a perfect double. He touches Bruce Wayne to try and get to Batman and then wreaks some havok as Bruce. There isn’t any of the detective work that has been the hallmark of Snyder’s run. Eventually Bruce goes to Lucius Fox to get a suit that appears to be a reference to Batman Beyond, which I think Snyder has mentioned to Comic Vine as something he enjoys doing even though it’s part of a different continuity. And he uses technology (not really a Bruce thing, but similar to some of the themes Dan Slott was exploring in Amazing Spider-Man before that ended) to defeat Clayface. Clayface samples under the Bat Suit and declares that Batman is Bruce Wayne, but this has no consequences as Batman tells everyone that he put on a face mask (with DNA) of Bruce. So, unlike everything Snyder has written – there is no consequence to the story. It doesn’t even become a story about Bruce’s brains/brawn vs technology. (Also this is the second time he’s had to don awesome tech to win – he needed it in Court of Owls) Both the story and the maudlin reveal at the end that Clayface no longer retains any of his old self sounds like something out of Batman: The Animated Series. Don’t get me wrong – I love B:TAS, but that’s not why I read Snyder’s Batman.

Snyder’s not the only one who’s been telling longer stories. Most of the other Batman books have had at least three issues if not more for their story arcs. Are shorter Batman stories just no longer compelling in this new age of decompressed storytelling? I know I tend to prefer detective Batman to action Batman for the comics because I don’t find the action to translate quite as well in the comics as it does in the cartoons. Additionally, there already so much action in the other comics, but Batman is one of the few who does puzzle solving. Or maybe it has nothing to do with how short the story is. Maybe Scott has spoiled us with story after story that has consequences and changes our understanding of Bruce so to be presented with a self-contained story just feels like something that should automatically be rejected.

I’d like to know what others think? Ever since I came up with this topic, I’ve been wondering what Comic POW!’s own Batman Expert Kari Woodrow would think. Please comment and let us know what you think. Do modern Batman stories lose their impact if they only span a few issues? Do you think this is an isolated incident? (ie even the great writers don’t always produce amazing work) And I’ll even widen the scope to ask if there are other heroes across any of the comic companies that seem to require long stories.

6 thoughts on “Is the Era of the Short Batman Story Over?”