Demon Knights: Seven Against the Dark (and also against bad representation) 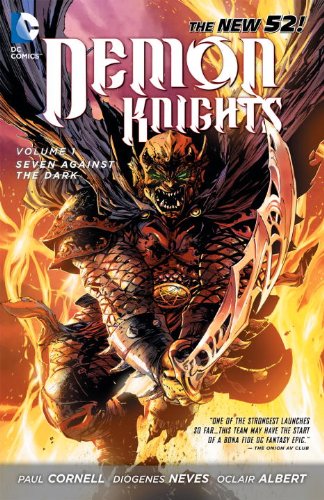 I’m going to admit up front that I’m not reading too many things in the current DC universe. I have tried to get into a lot of things – God, have I tried – but have ended up quitting book after book for various reasons.

I picked up Demon Knights out of frustration more than anything else, and was shocked when I couldn’t put it down. I had grabbed the first arc just to see what was going on, and as soon as I finished it, I bought the rest of the run and sat in to devour it. It’s high fantasy, and it’s incredibly entertaining.

After reading through the eighteen issues that were available when I picked the series up, I started wondering what, exactly, made it so appealing. The stories are good, yes, and the art is fantastic, but after giving it some thought, I realized that most of the reason I enjoyed it so much is because Demon Knights is a very character-driven story… and those characters aren’t what you usually see as the headliners of a comic these days.

Jason Blood: Jason was a completely normal young man… until the fall of Camelot, when he ended up bound to the demon Etrigan when Merlin (who was sort of his boss at the time) decided that one, Etrigan needed a keeper, and two, Jason needed a way to temper his rage. Jason is now immortal, and he spends a lot of his time searching for Merlin so he can force the wizard to release him from his burden.

Etrigan the Demon: Etrigan is a rhyming demon. He is terrible at it, which leads to frustration on his part and amusement on pretty much everyone else’s part, my own included. He doesn’t have to rhyme, but his powers are greatly bolstered when he manages it. He’s incredibly powerful and cares very little for humanity in general, though most of his rage is reserved for Jason and Merlin.

(Though I’ve listed them as separate characters, Jason and Etrigan usually only count for one person at any given time. When Jason is part of the group, Etrigan is imprisoned in Hell; when Etrigan is on Earth, Jason takes his place there. They’re incredibly different characters, but as they can’t be in the same place at the same time, they generally count as one.)

Madame Xanadu: Xan is an extremely powerful immortal sorceress, able to keep some “prepared magic” on hand for emergencies, and to cast larger, more powerful spells at a cost when they are needed. She has a relationship with both Jason and Etrigan; she claims to each man that she loves him and is tricking the other, and though she explains it as a way to keep the demon under control, the sense that I get from the books is that it’s much more complicated than that.

Vandal Savage: Yes, it’s that Vandal Savage. He’s been around pretty much as long as the Earth has; he’s incredibly smart as well as skilled on the battlefield. He also provides a lot of he comic relief in this series, oddly enough; I’ve referred to Demon Knights several times as “Vandal Savage’s search for new and interesting things to eat.” He’s endearing right up until the point where he becomes the villain that we’re more used to, and he fills both sets of shoes in interesting ways.

Sir Ystin: Ystin is the Shining Knight, charged by Merlin to find the Holy Grail so Camelot can be rebuilt. Ystin is a trans* character, which is handled with more or less care depending on which of the other characters is talking about him. He flies on a winged horse called Vanguard, to whom he can speak, and is very passionate about what he believes is his only purpose in life: completing his quest and finding the grail.

(Please note that I read Ystin’s character as trans*; I have also seen people interpret the character as genderqueer or genderfluid, among other things. I may be right; I may be wrong. Without the character coming out and stating for the audience what hir gender orientation is, though, all we have to rely on are interpretations; this is mine, and you’re 100% free to disagree with me.)

Al Jabr: Al Jabr has the dubious distinction of being the only non-immortal on the team. He’s a Middle Eastern scholar who tends to think that magic is simply science that he can’t understand yet (though his mind is changed along the journey). He’s also a devout Muslim, an intensely fair person, and someone who is extremely protective of innocents.

Exoristos: Ex is an Amazon who has, for reasons that have yet to be revealed, been banished from Themyscira. A lot of her character is built around wanting to return to her homeland, and all of the things she is and isn’t willing to do to get that chance. She has an interesting relationship with Ystin, whom she views as a woman, and it leads to some interesting character development for both of them down the road.

Horsewoman: Horsewoman is a talented rider and an extremely skilled archer. She has the ability to communicate with horses, as well as to bind her life to a horse’s – as far as I can tell, her own life energy isn’t depleted as long as she’s bound to a horse. If something happens to that horse, she has to find a new one quickly so nothing happens to her. She also happens to have a disability; her legs were crushed in a stampede when she was younger.

So what is it that makes this group so interesting? For me, the diversity is a big part of it. The main cast of characters is split nearly evenly between men and women. There are people of vastly different backgrounds, faiths, and morals. There’s a character with a disability who isn’t excluded because of it; there’s a trans* character who isn’t shunned outright, even if it does take him a bit to make his identity clear. There’s a character of color; there’s a woman who is interested in other women. Demon Knights has something that everyone can identify with in some way.

You probably aren’t going to identify solely with one character in this book – which is part of what makes it so great. You might, and more power to you if you do, but it’s more than that – it’s that there’s such a broad cast here that there’s probably going to be an element that grabs you. It might be finding a character that resonates with you. It could be the way it weaves history and mythology into the fantasy. It’s possible that you’ll find the allure of having actual dragons in the first story arc to be too much to resist.

The allure is a combination of a lot of different aspects for me, which is another thing I find interesting. A lot of media resonates with me on some level, but it’s rare for me to find something that grabs and keeps my attention for more than one of its elements. I think part of the reason that I like Demon Knights so much is because the characters are different – not just from each other, but also from what you normally see in a Big Two team comic. There are a lot of minorities represented and treated fairly, which I’m sad to say I wasn’t expecting. It’s not perfect, but it’s a definite step in the right direction, and it’s a fun one at that.

There’s also the fact that the comic subverts a lot of my expectations. I wasn’t thrilled to see that Ex wears an outfit that bares her stomach and leaves her vulnerable; instead of magically never getting attacked in a way that would draw attention to the ridiculousness of that type of costume, she gets shot in the stomach. There’s a love triangle between Jason, Etrigan, and Xanadu, but it’s set up and carried out in a way that both keeps the reader guessing and makes sense in-story – and Xan is called out on it, rather than the other characters just letting it slide. Vandal Savage is always walking the line between friend and foe, and when he dips to one side or the other, it’s backed up with good reasons (at least, reasons that make sense in the context of Vandal Savage). The characters all have flaws that make them interesting, and they’re constantly in positions to show that off.

Not only that, but the series is extremely amusing. The constant tension between the characters on such a large team could easily get overwhelming, but it’s often broken up with humor at just the right moment.

Demon Knights is a book that knows its characters, knows how they tick and what will set them off, and isn’t afraid to throw them into situations that might make them go boom. In fact, it seems to relish in that at times, sometimes in ways that make your heart jump into your throat. It’s surprising and it’s fresh, and its characters are incredibly diverse and realistically flawed. It’s a thrilling medieval fantasy ride, and though it isn’t connected to the present in DC by more than a few threads (at this point), it still sits comfortably within the canon.

Also, there are dinosaurs. Who can resist dinosaurs?

Finding a comic with positive representations of so many different kinds of characters is rare, which is why it breaks my heart that this series was recently cancelled. August 2013 will bring the last issue of <i>Demon Knights</i>; I can only hope that trade sales will somehow be strong enough to get a message through to DC. It can’t hurt the chances of a revival in the future if there’s interest shown, right?

Demon Knights: Seven Against the Dark. Written by Paul Cornell; art by Diogenes Neves, Mike Choi, and Robson Rocha. Published 2012; collects Demon Knights #1-7. Find it on Amazon or buy it from comixology.

2 thoughts on “Demon Knights: Seven Against the Dark (and also against bad representation)”