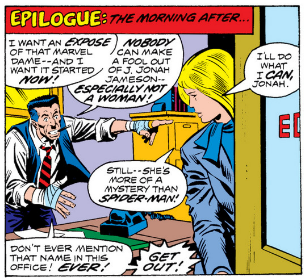 As you may remember Christina Blanch is running a class on Canvas.net about gender in comic books. This week we were assigned to read three different interpretations of Carol Danvers. Last week we read three interpretations of Superman, but one key difference is that Marvel Comics tends to (with few exceptions) stick to the same origins for their characters. Unlike DC, resetting their universe every 15-20 years, Marvel characters tend to just get more things tacked onto their origins, but the basics don’t change. We read the following three Carol Danvers books: (technically we had a lot of issues to read for the final one, but I thought it’d be interesting to limit the comparison to #1 issues)

I thought I’d compare the issues in the following categories: costume, hair, job, reactions to Carol, and plot.

When it comes to the costume I was a bit surprised that the 1970s costume was so revealing. Her midriff is exposed and her legs are also bare. In fact, the bottom of her suit essentially resembles a pair of high cut panties. (Even though they’re really connected to the top of her suit)  She wears a domino mask and regular size boots.  There is no cleavage to her costume which is not surprising given the time period, but surprising to me as a comics reader in the 2010s.

The 2006 costume is more like what I [sadly] expect in modern comics. Her costume is the one-piece bathing suit design that many female supers in the Marvel universe wear (see Storm and some incarnations of Psylocke). It seems to have traded baring the midriff for such a high rising bottom to her costume that it seems to almost reach navel-level height. Her boots go to thigh length and, combined with gloves that end at the elbows – seems to be a much more sexualized costume. She still sports the domino mask; even that has been made sexier and covering less of her face. And while there is no cleavage aspect to this suit, in many of the interiors you can see “side-boob” – so Jimmy Palmiotti is not drawing it as enclosed as Frank Cho is doing on the cover.  Speaking of Ms Marvel’s breasts, they appear to have grown 1-2 cup sizes in the 30 years since the previous cover.

Finally, we arrive at Captain Marvel #1. Finally, a costume we can be proud of. It looks more military like Captain America’s.  It’s almost Victorian in the sense that it even goes up to her neck. Perfect for those who have been calling for an end to sexism in comic book illustration. However, it gets a bit subverted within the issue – we’ll get to that soon. Also, there is less emphasis on her breasts.

I know that hair can be intensely personal to a woman. It’s the reason behind Storm’s mohawk (90s and now). However, I only know this second-hand for I am a man. So perhaps I’m wrong in my interpretation, but I feel like Ms Marvel from 2006 is the least sexist. In the 70s, she has a haircut from that era that makes her a cute or attractive woman. In 2012 Captain Marvel has a mannish haircut. (At least it appears that way when she’s fighting and on the cover. Near the end of the book it appears it’s long and she just had it tied up or something?) I feel like the 2006 hair is just natural flowing hair. Carol Danvers doesn’t seem to care what others think about her hair while the 70s one is trying to look pretty and the 2012 one is trying to be taken seriously by males.

Because, as I mentioned above, Marvel takes things on to characters rather than rebooting them, Carol’s resume grows through the decades.  So in the 1970s comic she has worked for NASA (a manly job) and when she lost her ability to work there she went to be the editor of a woman’s magazine (a womanly job somewhat akin to Lois Lane’s place gender-wise). In 2006 she’s worked as a test pilot in the military (manly) , NASA (manly) , Homeland Security (manly), and as an Avenger (male/female).  The latest one doesn’t make mention of all that, but it’s probably still true.

It’s interesting to see how everyone reacts to Carol/[Ms|Captain] Marvel. I was surprised to see that despite being a woman, the criminals in the first comic take her threat seriously.  Sure, they use sexist works like “dame” and all that, but they aren’t saying things like “she’s a woman, I can take her.” One of the criminals is even genre savvy – knowing he lives in a world of superheroes, he knows that women supers can be just as dangerous to criminals. (As I am adding the images to this post, I just realized that both Ms Marvel Vol 1 and Ms Marvel Vol 2 start with her throwing a car. Is the second an homage to the first?)

In direct contrast to that is the 2012 Captain Marvel where the villain routinely mocks her for being a woman.  He asks if she’s Captain America’s secretary and whether Captain America feels like less of a man for taking order from a woman. I love the witty response – she outranks him military-wise. I know what writer Kelley Deconnick is going for here – showing what a hard time it can be as a woman. But it feels anachronistic and out of place. I felt like I would have accepted that in the 1970s comic, but it seems a bit forced in 2012. I know women still live in challenging times (making 70-90% of what men make depending on the study you read), but it’s not the butt-slapping time of Don Draper.

Strangely, compared to those two issues, the 2006 issue deals with the fact that Ms Marvel is a has-been and doesn’t really deal with gender issues at all.  I mean Stilt Man is a B or C-list villain and he doesn’t even know who she is.

In her civilian life, Carol is dealt a series of sexist assaults by J Jonah Jameson, but it’s more in line with his character than anything else. He’s supposed to be a colossal jerk – he hates Spidey despite Spidey saving the city and his life multiple times.

Ms Marvel Vol 1 #1 is definitely a product of its time. The plot (other than Carol Danvers figuring out that she’s also Ms Marvel) involves Ms Marvel taking on Spidey-villain Scorpion when he tries to kill J Jonah Jameson for being responsible for his miserable life. Being written during the women power time period – it’s important that she save Jameson and for him to absolutely feel emasculated by being saved by a woman super.

It’s somewhat sexist that Carol Danvers suffers from fainting spells which happen before she becomes Ms Marvel. I really doubt a male super hero would be written as fainting before becoming his super self.

Other than that, the issue if full of unintentional funny due to being so old. There’s too much talking instead of just showing what’s going on.  Narrration boxes telling us things we can see with our own eyes. And a really weird fight in which she figures out that she got her powers from Captain Marvel and narrates all of this to Scorpion.

With the 2006 issue it’s nice that comics evolved to show, not tell.  There’s a lot less of the panels being taken up by pointless talking “I need to use my powers to escape from this bad guy” (no crap!) I love the frame story of her having a conversation with fellow Avenger alumnus Jessica Drew. It allows for one of my favorite story telling jokes – having an unreliable narrator called out on her embellishments.  I also love when super heroes do normal stuff like just eat together at a cafe. (I’ve mentioned this practically everywhere I’ve written about comics)

I took issue with two things gender-wise.  First off, there’s this incredibly annoying tradition in comics to bend females in ways that would break their bodies in real life in order to show off their breasts and butts at all times. It has spawned a Hawkeye meme and once you start to notice this stupid practice, you can’t unsee it.

Then there’s her mention of not being able to call the Fantastic Four because she did something embarrassing with Johnny Storm in Vegas.  I know this serves at least two purposes a) it makes a reference those Las Vegas ads that are still running – albeit less often and b) it makes it so she has to be there by herself. However, other than Spider-Man, I can’t see any male characters giving a crap what they did in Las Vegas – they’d call up a female super they’d hooked up with if it meant getting the job done right.  In the grand scheme of things it’s not too sexist, but it just tweaks me a bit. And, as we learn in the end – it’s a Brood Invasion. The Brood are the Marvel Universe equivalent of the xenomorphs from the Alien movie franchise. She needs all the help she can get.

The final comic, Captain Marvel, is the first one written by a woman.  It’s also the first time she’s called Captain rather than Ms. Now, I know there are in-universe reasons why she’s been Ms Marvel all this time.  And, as the PR scene in the 2006 issue pointed out, she’s gone by other names in the past – perhaps when people realized Ms Marvel was an antiquated name. After all, other women have outgrown their sexist names – Marvel Girl and Invisible Girl, to name two.

So it’s nice to see her go to the more respectful Captain Marvel. It’s nice to see a female in a costume like the ones any man would wear. But I feel like some of that is undone with these panels focusing on her butt:

It’s disappointing considering all the other changes made. It’s like not having those poses was a bridge too far.  “What do you want me to do? I made her costume less sexy! The least we can do is show her ass!”

It’s interesting comparing this issue to both the 2006 and 1970s issue.  First of all, the Ms Marvel Vol 1 looks like the stereotypical comic book.  The 2006 issue looks like a modern comic book. The 2012 issue looks like ART.  The artwork is absolutely beautiful and more painterly than comic book-y. Also, while the 1970s issue is action-packed, and the 2006 issue ends with a Brood invasion, nothing has happened by the end of the 2012 issue. Today’s comics sure can move at a slower pace. And I’m not complaining – I think she has some great character development moments with Captain America and Spidey. Although I do complain from the sense of having a very limited budget due to my daughter being born and when you compare story density for price between a book and a comic – you can be forgiven for wanting comics to get on with it a bit.

I don’t often read comics over so many decades and with the issues that Professor Blanch has picked out we get a very nice glance at how the way we view gender has changed over the years. It’s pretty neat to see how far we’ve come and how far we have yet to go.