Lost Dogs are All Around Us 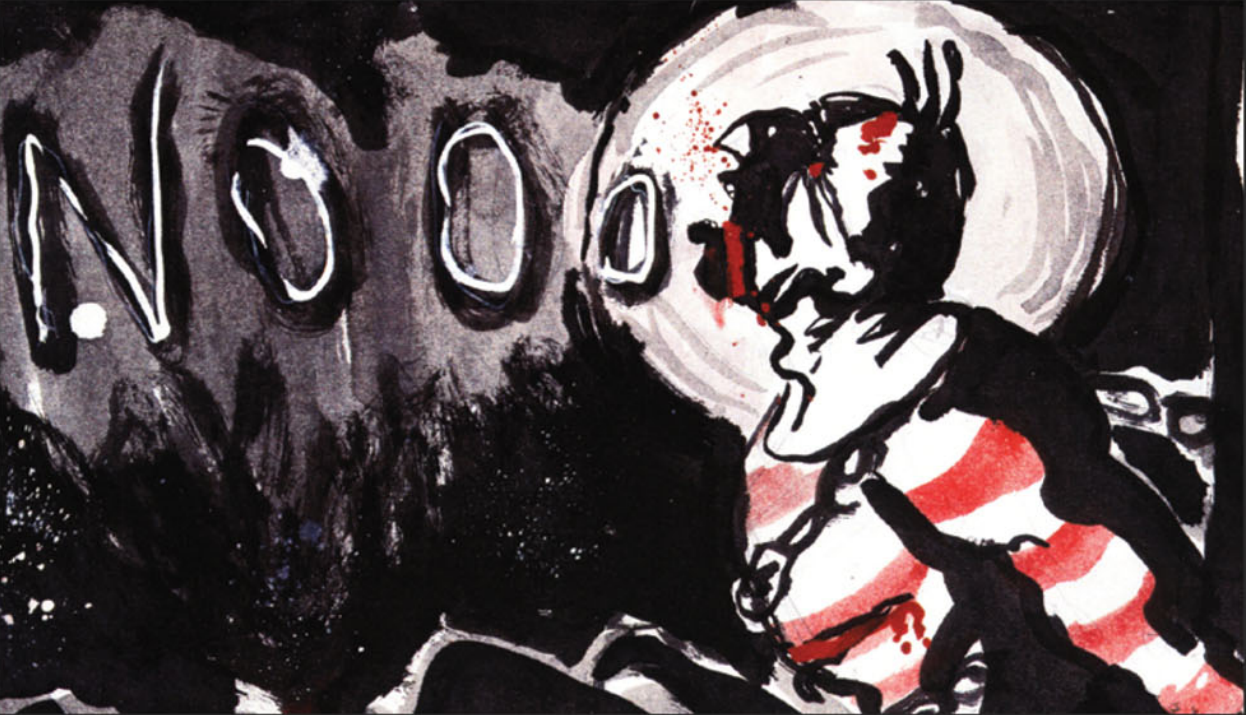 The world can be a pretty tough place and in Lost Dogs we see the worst of it. We know there are bad people out there, but we want to believe in the good of folks or that perhaps bad things won’t happen to us because we’re good people. Lost Dogs shatters all those illusions. Jeff Lemire’s first published comic book is a very fast read, but a very impactful read.

We’re introduced to a simple farmer, his wife, and daughter. He’s a gigantic man of few words – so few that, other than “uh-uh” a couple pages before the major event of the book, he doesn’t speak the entire time, even as his daughter is peppering him with questions. His wife ends up answering nearly all of the questions before he can say anything. The farmer takes his family to the city to go see a puppet show and the boats in the docks. There his family is attacked and he says his first words “Stay away…from my family!”

The darkness and helplessness comes from the fact that he cannot protect his family, despite his enormous size. There are too many against him and they have knives while he only has his bare hands. As the gang takes his wife away to rape and his daughter to kill, he’s tossed into the water to die. I don’t know if I’m alone or rare in this, but even before reading this I have often wondered what I would do if my family or just my wife ended up in a bad situation. On the one hand, we tend not to frequent bars, clubs, and other places where people get rowdy. On the other hand, we do go to Baltimore and Washington DC and there are pretty bad elements there. I’m often at a loss for anything I could do. Someone who’s already in the mindset to mess you up is probably experienced or at least cares not about his own life and safety. Having grown up in a non-chaotic society, I doubt I’d have the instincts necessary to overcome the overthinking in such a situation that could potentially save us.

Continuing the theme of the worst in folks, the sailors that fish him out of the sea agree to sell him to an old man for just 50 pence each. Then, the man who bought him forces him to fight in a bare knuckle boxing match for him in order to learn where his wife is – for she is alive following the ordeal. Although he doesn’t want to fight, he is forced to win the fight in order to find out where she is. He knocks out his opponent in one hit. Although he’s able to find his wife, she is dying from the beatings. As if to underscore the futility of life, the man whose boxer lost murders him in a cell.

Lost Dogs is so hard to read because it goes against what we want to believe – that only the bad are penalized. It’s why we treat the poor so badly – we assume they must have done something to deserve being poor – even if that something is just being lazy. But Lemire reminds us with this gruesome tale that even the purest of heart can have everything go horribly wrong for no reason at all.

Questions? Comments? I love discussion – feel free to comment wherever you read this.