It’s finally time for Ken Akamatsu to deliver on the long delayed sexual tension between Keitaro and Naru. They’ve been inching closer and closer together, but there was the possibility of never fulfilling things – other manga have left things unresolved between love interests, so it’s not without precedent. In fact, this volume starts off with Keitaro and Naru unable to have sex because Keitaro didn’t have a condom. This whole comic started off with Grandma making Keitaro manager and then him remembering that if a couple gets into Tokyo U, they will be together forever. Well, Kei and Naru FINALLY do that. But, even so, when Naru suggests they go to a Love Motel, they’re interrupted by Nyamo delivering a letter. There are a few other shenanigans, but even when Keitaro convinces Naru to give them, one more shot at getting devirginized, things go so wrong that they fall off the bed with a concussion. Still, in the end they get married and are still running the Inn. 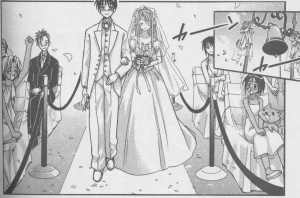 The main bits of culture we see here are that Keitaro and Naru are wearing modern, Western wedding clothes. Additionally, they throw flowers during the wedding. I think this shows at least some Western/American hegemony affects at least some couples in Japan. I have seen some similar trends with other asian cultures, although more common seems to be a wedding in which Western and traditional styles are mixed. 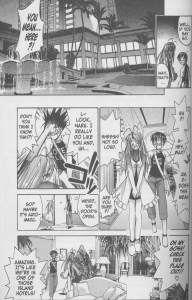 I, like many of us who have a fascination with Japanese culture, have heard of Love Motels. While there are motels in America that charge by the hour, I’ve always heard of them described as sleazy places and I don’t know any other adults who would be ok with the idea of being taken to one for sex. Most liaisons I hear of involve regular hotels, though they may be more expensive. Clearly, they aren’t meant to be sleazy in Japan as Naru hasn’t given any indication of being anything but proper. (Witness her beating of Keitaro for the most innocent of infractions) I think the key to understanding Love Motels comes from urban Japanese living. With small apartments containing thin walls, the only privacy couples might gain would come from the hotels. This is also the reason that net cafes took off in Japan and not in America – it’s a place to be on the net with some privacy.

So, that’s it for the manga. I’d like to take a look at the anime next to see any differences and whether that reveals anything new about culture, humor, and gender as well as to see what changed when it was translated to the small screen.