Love or Lust? Sunstone Volumes 1 and 2 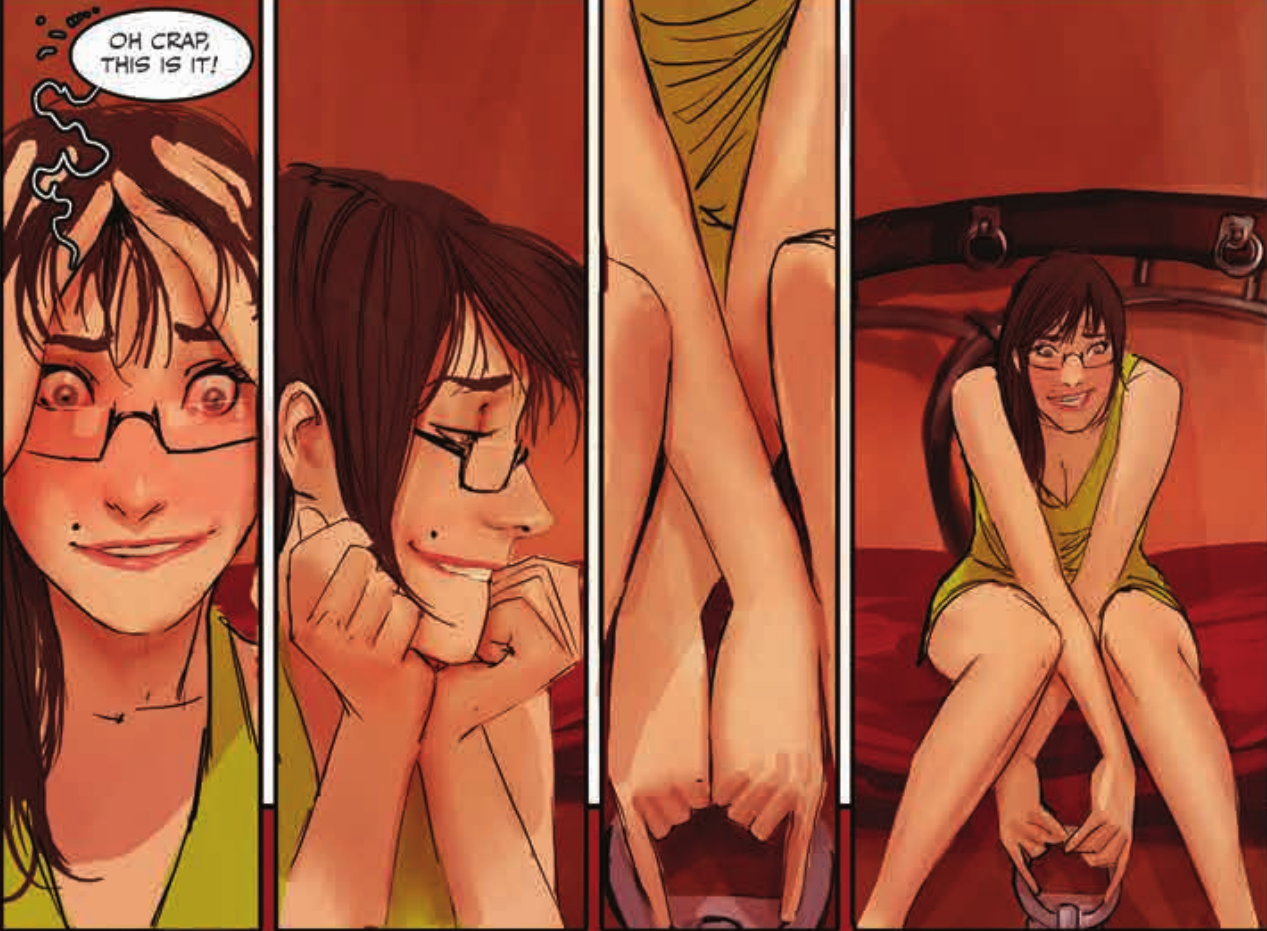 This has been a year of firsts for me when it comes to literature. Earlier this year I read a romance novel for the first time because it was written by Marjorie M Liu, who I loved on X-23 and Astonishing X-Men. Then, I got to Sunstone, the first erotic book I’ve read – comic or regular book form. It was interesting to have read both of those in this year as they serve a pretty interesting contrast in the way things are categorized. Liu’s book, Tiger Eye, is merely a romance and yet the descriptions of sex are extremely graphic. Sunstone is classified as erotic, not romance, and yet there are no graphic depictions of sex. In fact, there are no depictions of sex – both times I remember it happening during the first two Sunstone volumes, the story does the comic equivalent of a movie fading to black and then coming back post-coitus. That’s not to say the book isn’t explicit – there are sexual lingerie outfits and pubic areas are visible at various times – but it doesn’t complain the explicit sex of, say, Black Kiss.
That said, the biggest reason to read this graphic novel is the artwork. Here at Comic POW! we try to make sure to acknowledge the artists as the writers often get all the glory despite being only half the team. (Or ⅓ or more depending on how many people work on a particular issue) However, on this book, what makes it so much better as a comic than a book is Stjepan Šejić’s great work with facial expressions. Longtime readers of comics will know that some artists tend to be better at bodies or faces or action. Rarely is one artist able to do them all. Even those good at faces are often not able to make their characters as expressive as Stjepan Šejić does in Sunstone. Here is a gallery of some of my favorite expressive panels.

In a sense it’s a classic story of people who have had mismatched partners in the past finally finding the right person. As a huge chunk of Volume 2 shows up, a dominant person needs a submissive for things to work out well. Our main characters meet online and discuss their preferences for a while before nervously agreeing to meet in person. Šejić again shows us that this novel is for more than mere titillation by showing how nervous they are about meeting and about making good first impressions. Stjepan Šejić shows a working relationship first (in Volume 1) in order to then contrast relationships that don’t work quite as well.

Throughout the first two volumes we learn about the struggles our main characters went through by growing up with these desires. It reminded me of a reality-based version of what I enjoyed so much about the similar scenes in Sex Criminals. Being young and getting to understand your sexuality is a very terrifying prospect if your desires fall outside the norm. It’s hard enough if you desire completely normally acceptable things. This adds a depth to the characters that again is often missing in pop culture depictions of sexuality that falls outside of culture’s norms.

There are many things that are often omitted from storytelling because they don’t add to the story – showing, peeing, etc. In this graphic novel, many of these things are included because they add to the messiness of relationships. People have to prepare themselves before a date. It can also be embarrassing to have to pee as soon as you arrive at someone’s house. So it shouldn’t be too surprising that part of the plot of Volume 2 involves one of the characters getting her period. This is something that is rarely mentioned in stories at all – even in stories involving long journeys that go beyond a month. I think it rarely needs mention because, as with peeing, etc, storytelling omits anything that does not add to a story. But it is a fact of life for half the human population. As a recent Rocket Talk podcast mentioned, it may have consequences in various stories depending on what the protagonists are intending to to. Obviously, in a story about sex, it’s quite important and so it gets mention.

At the end of the first volume, Stjepan Šejić says that he started working on Sunstone as a webcomic because he’d grown disillusioned working on comic books based on other’s IP. Sunstone was a passion project to regrow his passion for creating comic books. What’s great is that he not only succeeded in regaining his passion, but he also created a great work of art and work of storytelling. I hope it continues to gain popularity so that people can learn about a more positive depiction of BDSM that still retains a high level of sexuality.
Sunstone Volume 1 and Volume 2 created by Stjepan Šejić (Buy it here to help support Comic POW! Sunstone Volume 1 OGN

2 thoughts on “Love or Lust? Sunstone Volumes 1 and 2”