Scott Pilgrim Gets it Together (in color!) 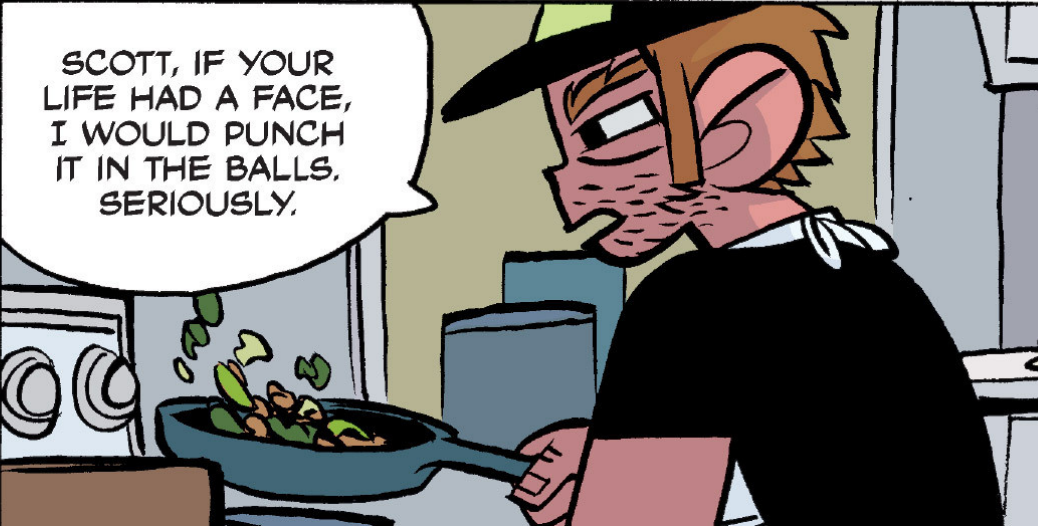 I read Scott Pilgrim in its original manga-sized, black and white form when it first came out. With the final volume of the color version coming out this year, I thought it would be a great time to revisit the story as well as looking at how the addition of color changes things. I’ll be exploring the story and themes volume by volume. This time, volume 4.

As far as their extended adolescence goes, this volume represents a major shift for a lot of the characters. This volume is when we realize that we’re seeing the end of something that’s been going on almost since high school when it comes to friendships and patterns. Perhaps at least partially from getting caught by Scott Pilgrim in the middle of an intimate moment, Wallace suggests it’s time for Scott to find his own apartment – or at least stop sleeping on the floor, sharing a sleeping bag with a gay man (which whom he is not involved). Stephen Stills has a complicated journey in this volume as he outwardly seems transfixed on getting Sex Bob-omb’s album recorded by Joseph. However, he stops holding band practice and has been turning away gigs, perhaps because recording the album has made him realize the futility of his band ever getting anywhere, and wanting to move on. There’s also the reveal about why he’s gotten so close with Joseph which will either happen in the next volume or the last one. Kim finally moves out of the apartment she shares with women she hates and at the very least this represents her refusal to remain in a crappy situation.

Scott had the most growth needed and so, true to the title, he does (eventually) get it together. While the volume starts off with him still unemployed, he eventually get a job with Stephen Stills in the kitchen of a restaurant. He is also confronted with the fact that he doesn’t know anything about Ramona, but he tries to get to know her better and, near the end, he declares his love for her. (Giving him The Power of Love) He also matures in that he’s able to resist Lisa’s advances when he goes to see her at her sister’s place. Even though Roxanne has been stoking Ramona’s fears that Scott is cheating on her with Lisa, he doesn’t take that route of an excuse. (If she’s going to treat me like I’m cheating, I may as well be cheating)

Knives is the character most in stasis, although I think this has partially to do with her age. Unlike the other main characters, she isn’t at the age where she should be starting to mature. She still loves Scott and has broken up with Young Neil, which had been a kind of relationship by proximity to Scott and his “cool” band. Stephen does admit her into their inner circle and she seems to relish getting to hang out with the older kids. Her father stalks Scott throughout the volume in one of the most blatant protective father metaphors ever, but it fits in quite well in this world.

Scott and Ramona once again both have to deal with the consequences of the past this volume. Lisa, who we met a while back, comes back into Scott’s life as she stays with her sister while waiting to go try her luck at being a star in the USA. From what we say in previous volume’s flashbacks, she seems to have had a thing for Scott that he was completely oblivious about. Instead Scott ends up with Kim Pine and Envy Adams. In a move that will no doubt be familiar to other readers who have met up with high school acquaintances (and an early plot point in Zack and Miri Make a Porno) Lisa ends up trying to obtain what she couldn’t when they were younger. This doesn’t do much to Scott (as I mentioned above, he seems to have matured beyond cheating), but it does strain things between him an Ramona. When he tells Ramona he spent the night with her, she assumes the worst at first and sinks to the ground. But after he assures her nothing happened, he’s confronted with her way of dealing with the past. Roxy has been staying at her place and she even mentions they made out. Roxy does accuse her early in the album of being the “Queen of Cheating”. As usual, Scott has to deal with an Evil Ex, although, in this case – he has to face his convictions that he doesn’t fight girls.

Interestingly, the prominent gay relationships in this volume are both lesbian and both conform to the western view that it’s a) sexy (Scott tells Ramona he didn’t know she had a “sexy phase” in college) b) female sexuality is more fluid. Although we are (if my memory serves me well) a volume or two away from a revelation that a male character has gone from straight to gay, up to this point, the only male gay character, Wallace, is portrayed as having always been gay. Meanwhile, in this volume Knives and Kim make out while drunk (with a reprise of “I’ve kissed the lips that have kissed you”) and Ramona experimented in college. While O’Malley’s depictions are consistent with pop culture understandings of female relationships, I always wonder what’s going on in reality? First of all, is it truly more likely for women than men to commit same-sex acts when drunk or when in college? And why is this? Is it a true biological difference or merely a narrative we have become comfortable with? After all, experiments have shown that people will act the way they think they’re supposed to when drunk if they are told they are drinking alcohol even when it’s just colored water. Or does it happen just as often to men, but we don’t talk about it because of some societal reason surrounding masculinity. A bit heady for a comic with ninjas, sure. But between the thinking I do for Comic POW! and other ways I’ve been trying to increase my understanding of the world, I find myself questioning the authenticity of lots of defaults used in stories.

The only Gideon reference in this volume occurred when Scott had to travel through the dreamscape to escape Knives’ dad. He sees Ramona in sexy clothes sitting at his feet. I know it’s explained later, but at this point I can’t remember and I wonder if this is her dream or some way he’s using to control her.

A random point: Scott continually can’t remember his birthday. I remember when I was reading the original black and white versions that at this point I absolutely hated Scott and almost quit reading the books. His continued idiocy was getting on my nerves. But we eventually see NegaScott in this volume (continuing the Sonic references) and that’s the key (as we’ll later learn) to Scott’s dumb nature.

One thought on “Scott Pilgrim Gets it Together (in color!)”