At the Beginning: Island #1 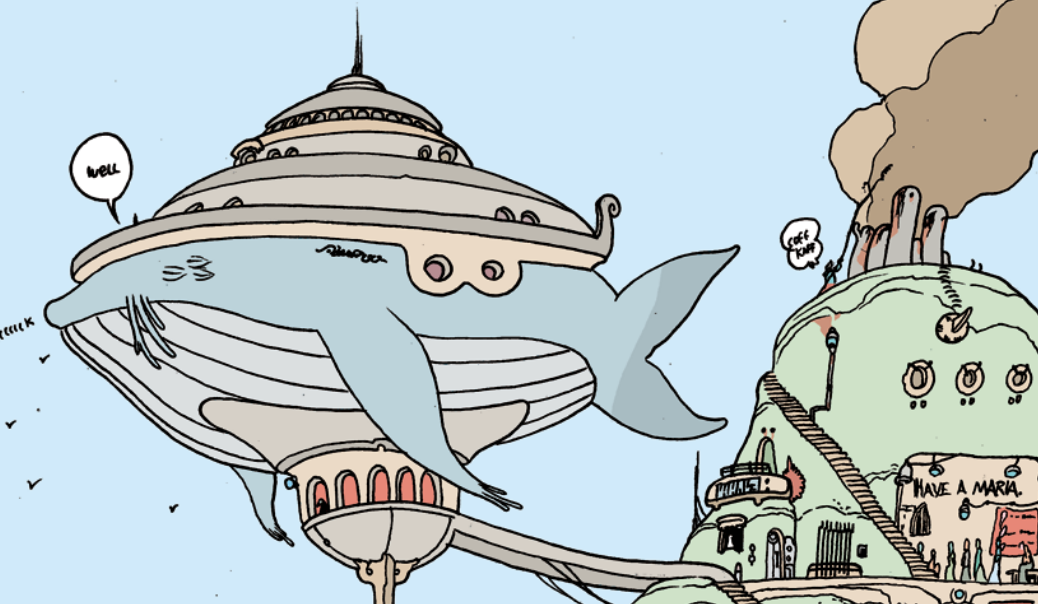 We don’t often consider single issues here at Comic POW! We prefer to look at story arcs and completed series to get a better feel for what the author and artist were trying to accomplish. However, I thought it would be interesting to take a look at some comics’ first issues to predict where we think it might be going and see how that compares with where the series actually goes. This series is called “At the Beginning” and it’ll usually be for series right as they are starting up.

Outside of Shonen Jump in Japan and 2000 AD in England, there aren’t too many ongoing monthly comic anthologies at this point in time. I tend to see one start up every year or so, but very few survive. I got interested in Island because Brandon Graham is heading it up and it’s where Multiple Warheads is slated to debut new issues. It will be interesting to see whether the comics end up being long-running, the contributors are the same every time, or if it’ll be completely different every time. In Island there are certainly quite a few different worlds created in this issue.

The first story is I.D. by Emma Rios with a chapter called “Why don’t you like your body?”. The art is the first thing that stood out to me because, for one thing, while it’s monochrome, it’s not black and white, it’s red and white. It seems to my eyes to be 3D glasses red. At first the premise seems merely intriguing. Three folks are unhappy with their bodies and some science procedure that isn’t revealed yet can change your body. On its own this is interesting given how much transgender is in the zeitgeist (and transhuman in sci-fi – always one step ahead). There are hints that this is some kind of crazy procedure because of the questioning the characters face before beginning the procedure. But then, on top of that Rios has a terrorist attack take place. This story seems as though it is going to channel and help us process the NOW.

That makes it a great contrast to the next story which is focused on the past. Railbirds is an almost completely prose story with a few illustrations. Kelly Sue DeConnick tells about a friend who meant so much to her at a key point in her life. It appears to be autobiographical as she mentions Matt Fraction and other details that make it seem like a deeply personal essay rather than a first person fiction.

This is followed by the story that made me interested in checking out Island, Multiple Warheads. This chapter’s titled Ghost Town. It continues the story from before, but while it continues the pace from before, it feels a bit disappointing that it is so decompressed given the emotional cliff hanger the last issue ended on and how long it’s been. The story begins to tie together the characters as the elephant guy asks Nick to do a favor for him. The main threads of last issue continue – Nick only takes the assignment because he feels somewhat inferior to Sexica. Again, Graham continues his pace and says the next issue appears in Island #4. But, when you have an anthology magazine and one of the stories is periodic, it risks having people not get every issue if they weren’t grabbed by the other stories this time around. Anyway, I don’t fault Graham as he does both story and art on Multiple Warheads, it’s just a reality of anthology magazines.

The final narrative story is Dagger Proof Mummy. Again, an interesting and distinct world from the other stories is created by Ludroe in which there are humanoid, talking dogs and cats. It revolves around a skater who is the reader surrogate discovering the world. It has lots of potential and the story has lots of heart. The main theme of this issue is loss of a friend, but also wondering if friendship is reciprocated. We’ll see where it goes as the series continues.

The issue ends with a meditation by Graham on why he loves comics as a story-telling medium and some of the techniques he experiments with.

As I said up top, it’s quite a mixed bag of storytelling. On balance it’s doing what anthologies do best – bringing you along for one story and exposing you to things you might have sought out otherwise. I certainly have enjoyed similar qualities in written fiction anthologies; there’s no reason I might not end up enjoying some or all of the non-Graham stories. The question is whether this can work in the current comics marketplace. Without going fully digital (which is an option, but might necessitate a different art style like Brian K Vaughan’s The Private Eye), can they get enough sales to work with the physical marketplace?